Fundamental legacy of The Nuremberg and Tokyo Trials (1945-1948) 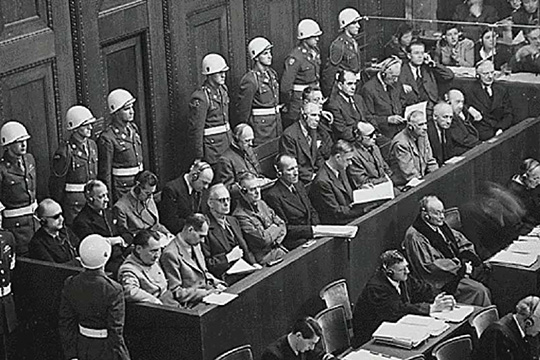 These – rather unfortunate – days some voices in Europe are trying, in a quite ahistorical fashion, to question the very fundaments of the antifascist legacy. Dangerous and highly destructive equitation attempts are on the way. Still, this legacy is what finally made the Old continent human and peaceful – a role model to admire and for the rest of us to follow.

These regrettable equitations make it worth to revisit the Nuremberg and Tokyo trials, which are essential pillars of the Human Rights charter brokered right after under the OUN auspices. Consequently, a very legacy of these trials is extraordinary and far reaching. It represents a core building material of the house called Modern Europe – something that the Director of International Institute IFIMES, Dr. Zijad Becirovic repeatedly stresses in his media appearances, as one of the bold but rather rare voices of the right direction and historical responsibility awareness today.

Conclusively, the importance of tribunals is hard to overstate. Its reaffirmation today is needed like never since the very end of the WWII.

Noam Chomsky once said, “For the powerful, crimes are those that others commit.” This was not the case for Germany and Japan post-World War II. The victorious Allied powers established the first international criminal tribunals to prosecute political and military officials for war crimes and other atrocities committed during wartime. The four major Allied governments; the United States, the United Kingdom, France, and the Soviet Union, set up the International Military Tribunal (Nuremberg trials) in Nuremberg, Germany, to prosecute and punish the major war criminals of the European Axis.

The tribunal presided over a combined trial of senior Nazi political and military leaders, as well as several Nazi organizations. The less-recognized International Military Tribunal for the Far East was created (Tokyo trials) in Tokyo, Japan, following the 1946 proclamation by Supreme Commander for the Allied Powers, U.S. Army General Douglas MacArthur. The tribunal presided over a series of trials of senior Japanese political and military leaders to prosecute and punish Far Eastern war criminals. The Nuremberg and Tokyo trials differed in several important aspects including their origins, compositions, and jurisdictions.

The Allied powers established the policy that international tribunals in Europe and in the Far East after World War II would focus on, most importantly, a decision on individual criminal liability for crimes against peace. The Allied governments, and specifically the United States, sought after this policy as a solid step toward organizing an international legal system for discouraging future aggressors and averting the sort of war devastation that the Axis aggression had caused. This US-enlivened policy, first presented at Nuremberg, was repeated and pursued precisely at Tokyo. Luc Reydams and Jan Wouters argued that “The Nuremberg and Tokyo Charters were drafted by a handful of statesmen from the highest echelons of government for whom an international tribunal was not a goal unto itself, but a means to a very specific end.”[1] The Tokyo Charter, necessitated that the principal charges against the defendants be crimes against peace while deeming charges on war crimes and crimes against humanity as discretionary. Therefore, a great part of the court battles at Tokyo rotated around substantiating aggressive war charges, despite the fact that proof of Japanese wartime atrocities was, truth be told, likewise exhibited.

In June 1945, the day of the signing of the United Nations Charter at the San Francisco Conference, delegations of the United States, the United Kingdom, France, and the Soviet Union, negotiated in London on the regulating principles for prosecuting war criminals. It is noteworthy that the respective heads of these delegations; Robert Jackson, David Maxwell Fyfe, General I.T. Nikitchenko, and Robert Falco later served in notable roles at the International Military Tribunal. Meeting in Potsdam to discuss the future of Germany and Europe, Truman, Churchill, and Stalin affirmed the London talks.

The tribunal held its opening session in the Palace of Justice in Nuremberg, and the trials lasted from November 1945 to October 1946. Twenty-two Nazi political and military leaders were indicted, including Hermann Goering, Rudolph Hess, Joachim von Ribbentrop, Alfred Rosenberg, and Albert Speer. The tribunal found nineteen individual defendants guilty and sentenced them to punishments that ranged from death by hanging to fifteen years of imprisonment. Three defendants were found that they are not guilty, one committed suicide before the trial, and one did not stand trial due to physical or mental illness.

Unlike the International Military Tribunal, the International Military Tribunal for the Far East was not created by an international agreement, but it nonetheless emerged from international agreements to prosecute Japanese war criminals.[3] In July 1945, the United States, the United Kingdom, and China signed the Potsdam Declaration, in which they stated that “We do not intend that the Japanese shall be enslaved as a race or destroyed as a nation, but stern justice shall be meted out to all war criminals, including those who have visited cruelties upon our prisoners. The Japanese Government shall remove all obstacles to the revival and strengthening of democratic tendencies among the Japanese people. Freedom of speech, of religion, and of thought, as well as respect for the fundamental human rights shall be established.[4]” and urged the Japanese government to, “proclaim now the unconditional surrender of all Japanese armed forces, and to provide proper and adequate assurances of their good faith in such action.[5]” The war in Europe had ended but the war with Japan was continuing at the time the Potsdam Declaration was signed. Nonetheless, the Potsdam Declaration was not signed by the Soviet Union because it did not declare war on Japan until the United States dropped the second atomic bomb on the city of Nagasaki.[6]

Japan surrendered on the 14th of August 1945, six days later. Officials of the US State Department leaned toward holding an intergovernmental conference to establish special international tribunals, but the State-War-Navy Coordinating Committee came up with the plan to use the power of the Supreme Commander of the Allied Powers, General Douglas MacArthur,  mindful of the experience with the London Conference where Justice Robert Jackson had enormous difficulty coming to an agreement with other delegations on the Nuremberg Charter.

At the following Moscow Conference, held in December 1945, the United States, the United Kingdom, and the Soviet Union with affirmation from China agreed to a basic structure to occupy Japan. General MacArthur was granted authority to “issue all orders for the implementation of the Terms of Surrender, the occupation and control of Japan, and all directives supplementary thereto.[7]”

The International Military Tribunal for the Far East oversaw the prosecution of twenty-five Japanese political and military leaders. The Emperor of Japan Hirohito and other members of the imperial family were not indicted. In fact, the Allied governments allowed Emperor Hirohito to retain his position on the throne, albeit with diminished status. The trials took place from May 1946 to November 1948. The International Military Tribunal for the Far East found all defendants guilty and sentenced them to punishments ranging from death to seven years’ imprisonment.

The Nuremberg and Tokyo trials contributed significantly to the development of international criminal law and served as models for a new series of international criminal tribunals[9] that were established in the 1990s. Moreover, the reference to “crimes against peace,” “war crimes,” and “crimes against humanity” in the International Military Tribunal Charter represented the first time these terms were used and defined in an international instrument. These terms and definitions were also adopted in the Charter of the International Military Tribunal for the Far East, and have been depicted and expanded in a succession of international legal instruments since that time. The conclusions of the Nuremberg trials also served as models for the Genocide Convention 1948, the Universal Declaration of Human Rights 1948 and paved the way for the establishment of the International Criminal Court.

In conclusion, the Nuremberg and Tokyo trials legacy itself is extraordinary, and its importance is hard to overstate. Nuremberg and the international community’s experience with the ad hoc tribunals demonstrate that international justice doesn’t have to be perfect to be good. Holding up Nuremberg to an impossible, imagined standard is neither fair nor productive.

We cannot forget that the Nuremberg and Tokyo trials and, fifty years later, the establishment of the International Criminal Court aimed to safeguard peace in all regions of the world. The achievements of these great trials in elevating justice and law over inhumanity and war give promise for a better tomorrow by paving the way to deal with international crimes. Furthermore, the international system has made huge contributions to the birth and development of modern international law.

Wedyan AlMadani is a Saudi scholar.

She is Jeddah-based Legal Advisor, and specialist in international law and relations.