G20 in the Labyrinths of the Global Economy 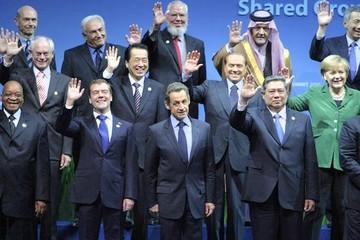 The Seoul G20 summit will stay on record as a failed attempt to find a way out of the labyrinths of the global economy. At the moment the group of twenty global economy champions is locked in two bitter disputes: one between the proficit and the deficit countries and the other - between currency manipulators and potential victims of the currency manipulation.

While the countries burdened with huge trade and budget deficits are keenly interested in finding a cure for the global imbalances, the proficit countries tend to oppose radical steps in the direction. For the most part, the problem is centered around the economic relations between the US and China. In a bid to tame export-import disparities, Washington brought to the G20 summit a proposal to impose regulations limiting a country's foreign trade surplus to 4% of its GDP, which would force proficit countries to implement structural reforms aimed at boosting domestic demand and deficit countries – to enact serious export stimuli packages. Currently China's trade surplus and the US foreign trade deficit measure 4.7% and 3.3% of their respective GDPs.

Not only China, but also Japan, the Saudi Arabia, Australia, and Germany expressed opposition to the US proposal. Notably, Berlin seems to be even more critical of Washington's approach than Beijing and altogether rejects the idea of foreign trade deficit targets. Similarly, Russia does not welcome the concept of artificial caps on trade imbalances.

The temperature of the standoff over the currency manipulation rose following the FRS November 2 decision to additionally pour $600b into the US bond-buying program and, at the same time, to reduce the monthly US treasuries acquisition volume from $100b to $75b. Experts do expect the US bond-buying to be more extensive. On top of that, the FRS intends to swap some $25b in treasury bonds monthly for mortgage obligations.

Defending the FRS plan, US President B. Obama said in a rhetoric outburst that the US is the backbone of the global economy and added: "I will say that the Fed's mandate, my mandate, is to grow our economy. And that's not just good for the United States, that's good for the world as a whole". T. Roosevelt used to say with the same typical self-confidence: “One of my principal tasks is to prevent bankers and businessmen from committing suicide!”, but in that distant epoch preventing bankers and businessmen from committing suicide eventually led to World War II. The prospects of massive injections of the depreciated US currency into the global economy are also quite terrifying.

The phenomenon dubbed currency wars began with heated exchanges between China and the US over fiscal policies. Beijing faced rounds of accusations that it deliberately kept the yuan exchange rate low to promote its exports but charged in response that the US was the actual currency manipulator flooding the world with freshly printed dollars. On the eve of the summit, Berlin also stated that the US joined the ranks of currency manipulators seeking to bolster export growth by depreciating national currencies.

Germany's position reflects the widening rift between Berlin and Washington. Germany as the country topping the list of China's trade partners does not buy the US views on the yuan and moreover calls for recognizing China's full status of a market economy.

Clearly in the hope to avoid clashes with either side, Russia adopted a moderate position over the currency wars. Rather, Moscow is suggesting to look at the situation in a broader context and to discuss replacing the Bretton-Woods agreement with new mechanisms to regulate international financial markets. A revision of the Bretton-Woods system is upheld by the IMF and the World Bank. Russia also supports the plan for a basket of floating exchange rate reserve currencies including the yuan.

In the run-up to the G20 summit, Russian president's aide A. Dvorkovich said Russia would favor a partial reinstatement of the gold standard to stabilize the key currencies. Russia is one of the world's top five holders of gold reserves which it continues to accumulate. Moscow's views on the global fiscal reform are largely shared by Germany and France.

The leaders who convened in Seoul warned against heightened expectations. As reported by Reuters, they failed to reach consensus on the key issues including the exchange rates. Therefore, in the foreseeable future the FRS will keep the printing press running, China will be pushing down the yuan value, and Europe – strengthening the Euro... And still, at the moment there is no alternative – the G20 summits remain the only forum for comprehensive discussions of global economic problems.