G7: “A time of uncertainty lies ahead of us” 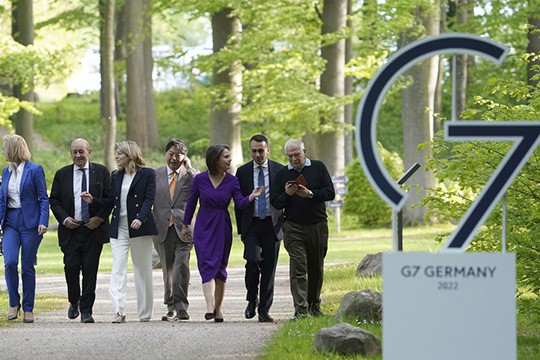 The G7 countries see that they have failed to isolate Russia and, perhaps, it is not even in their interests to entirely fall out with Moscow for economic reasons, writes a well-known Indian expert, Ambassador M. K. Bhadrakumar in an article “G7: Cracks in Western unity on Russia“.

He says: The three-day gathering of the G7 leaders in Elmau Castle in the Bavarian Alps in a fairy-tale setting calls to mind the analogous past of the Ottoman decline. There is much public criticism that such an opulent spectacle is no longer in keeping with the times and an example of how out of touch, even decadent, these politicians have become.

The German Chancellor Olaf Scholz, in his capacity as the host, made a final appearance before the media on Tuesday with a somewhat somber atmosphere that reflected his message to the assembled journalists, “A time of uncertainty lies ahead of us. We cannot foresee how it will end.”

Scholz was referring to the Ukraine crisis and its consequences. Scholz spoke of a “long haul” and of consequences for everything and everyone. Gone was the triumphalist western narrative about the “cancel Russia” strategy.

Indeed, the main point of contention among the G7 countries was how to deal with Russia. The G7 countries see that they have failed to isolate Russia and, perhaps, it is not even in their interests to entirely fall out with Moscow for economic reasons.

The summit barely agreed to discuss a batch of new sanctions against Russia, but the deliberations underlined the limits of using economic tools to punish Russia. The Western strategy is in logjam — Russia is winning the war despite the US’ massive weapon deliveries to Ukraine; sanctions failed to deter Russia and are possibly hurting Europe more than Russia; and, ideas have run out.

The G7 leaders also discussed a US proposal, which provides that buyers of Russian oil themselves determine the maximum price they are willing to pay for it. In the end, no concrete decisions were made against the backdrop of the European Union’s reservations. The US proposal will make sense only with the full participation of all EU countries, as well as China and India, who are unlikely to support such a decision.

In fact, some EU countries are almost 100% dependent on Russian oil and if Russia does not agree to supply oil at a reduced price, then these countries risk being completely without raw materials.

The low-key performance of US President Joe Biden at the G7 summit speaks for itself — he was content to let other leaders do most of the talking. On the final day of the summit, as the sun disappeared and dark clouds settled over the imposing mountain backdrop behind Schloss Elmau, Biden pleaded an impending thunderstorm to make a hurried departure for Munich airport, abandoning a speech he’d planned to deliver.

Indeed, the disconnect is almost surreal.

Fundamentally, what all this highlights is that the G7 is clueless how to navigate a way out of their “sanctions from hell” against Russia. The summit exposed that the existing sanctions against Russia have gone beyond most Western policy makers’ pain threshold. And the European leaders are discovering now that there is a price to be paid for further sanctions.