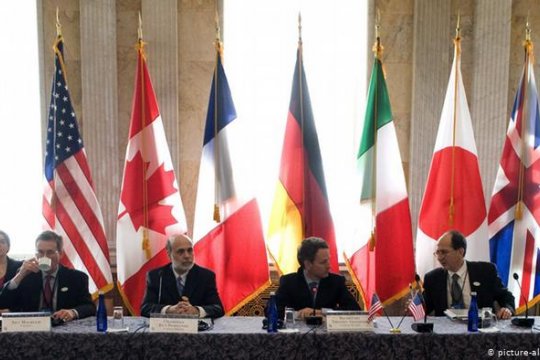 A discussion of Russia’s return to the G8, initiated by the French President Emmanuel Macron and quickly supported by his US counterpart Donald Trump, has intensified in the West. Even though Germany, and especially Britain, appear less enthusiastic about the prospect, the whole debate means that all attempts to "isolate" Russia in the world have fallen flat.  Moreover, as the developments of the past few years show, no key international problems, from strategic stability to regional conflicts (above all in Syria) can possibly be solved without full-fledged Russian participation.

According to US media reports, in a recent telephone linkup, the French and American presidents both agreed that Russia should be invited to next year’s G7 summit, slated to be held in the United States. The CNN journalist Kylie Atwood wrote, citing senior sources in the US administration, that the idea to invite Russia had been pitched by President Macron. Donald Trump, for his part, briefing reporters in the White House, emphasized that it was his predecessor, Barack Obama, who wanted Russia out of the G8.

"But I think it's much more appropriate to have Russia in. It should be the G8 because a lot of the things we talk about have to do with Russia," Trump said. Trump and Macron agreed to discuss this issue in greater detail with their colleagues from Britain, Germany, Italy, Canada and Japan at the upcoming G7 summit to be held in Biarritz, France, on August 24-26. [1]

Donald Trump first said that Russia should take part in the G7 summit, back in June 2018, but the only voice of support he got then came from Giuseppe Conte, who resigned from his post as Italy’s prime minister earlier this week amid a coalition row.

The August 19 meeting in France by Presidents Emmanuel Macron and Vladimir Putin were another sign of the changing mood about Russia’s participation in the Group of Seven. During that meeting President Putin said that any contacts with the G7 countries were “useful” and did not rule out the resumption of the G8 format. [2]

President Macron, in turn, stressed that he views Russia as “a part of Europe,” and is going to facilitate Moscow’s closer and meaningful dialogue with the West. According to diplomatic sources in Paris, Macron’s position depends on how the situation in Ukraine will be developing.

Russia's participation in the G8/G7 will depend on the situation in Ukraine, Reuters reported, citing sources in the French Foreign Ministry.

Britain’s reaction to Macron’s idea was predictably tough, with Prime Minister Boris Johnson reiterating allegations about Russian “provocations.” During a joint news conference with German Chancellor Angela Merkel in Berlin, he said that he was “aware of the moves to reintegrate Russia into the G7."
“Given what happened in Salisbury in Wiltshire, given the use of chemical weapons on British soil, given the continuing instability, civil war, the war in Ukraine, given Russia's provocations, not just in Ukraine but many other places, I must say … that the case has yet to be made out for Russia to return to the G7," Johnson added.

Angela Merkel was more reserved, saying that the situation about Russia's participation in the G7 could change if serious progress is made concerning the implementation of the Minsk accords on southeastern Ukraine. [3]

German government representative, Steffen Seibert, was quoted by the local Handelszeitung newspaper as saying that the issue of reviving the G8 format with Russia’s participation could be discussed, but there were no prerequisites for that yet. He said that Russia was expelled from the G8 following the events of 2014 - the war in Donbass and the annexation of Crimea. “Both situations persist,” Seibert noted, adding that Moscow’s more active participation in the G7 was possible only after this situation has changed. [4]

Statements to this effect coming from the European Union’s headquarters in Brussels were very much in the same vein. According to a senior source in the EU, Russia's rejoining the G7 group before Moscow has fulfilled a number of conditions would be seen as a "sign of weakness." [5]

The Russian Foreign Ministry made it clear that Moscow is ready to consider restoring the G8 format if the G7 participants verbalize their proposal. [6]

The Ministry spokeswoman Maria Zakharova, noted, without making any official comments, that it was “difficult to understand what is being said,” while President Putin’s press secretary Dmitry Peskov suggested waiting for clear-cut statements from all members of the G7.

“President Putin said that Russia does not refuse to communicate in any format. However, Russia's return to the G7 and the former G8 is not an end in itself,” Peskov emphasized. [7]

The decision to reintegrate Russia into the G8 can be made only on the basis of a consensus of all participating countries … some of which conditionally support Russia (Japan, Italy and, to a certain extent, Germany), and some criticize it (Britain, Canada),” Andrei Kortunov, Director General of the Russian Council on Foreign Affairs, noted. He described as “an additional factor of uncertainty” the position of Donald Trump whose repeated calls to bring back the G8 format have several reasons.

“First, he does not attach much importance to the G7 as a group of Western democracies. Secondly, being a pragmatically-minded person, he feels that the G7's center of gravity is gravitating towards security and crisis response, which is hard to achieve without Russia. And, finally, this is also about Trump’s predilection for shocking people,” Kortunov added.

For Russia itself the restoration of the G8 format is not an end in itself, even less so if it is done at the cost of concessions demanded from it by the West.

“Russia did not feel itself a fully-fledged member of the G8, always having to prove something and being lectured by the rest,” the Valdai Club’s program director Andrei Sushentsov noted.

“Moscow would not like to emphasize that it wants the club of leading Western countries to resume its work, showing that the world has become more complex and less Western-centric," Shushentsov noted, adding that, apart from the idea of Western solidarity, the G7 enjoys little support. Some of its members are at loggerheads with each other: the departing British have spoiled their relations with the EU countries; Japan has its own interests in East Asia, which it is primarily realizing through cooperation with the United States. Moscow’s reintegration into the G7 could give the impression that Russia is returning to the West, thus underscoring the West’s leadership in the modern world.” [8]

Many in the Russian political establishment are equally skeptical about the prospects of reviving the G8 format. Alexei Pushkov, a member of the Federation Council – the upper house of parliament, has dismissed the conditions set out for Russia’s return to the G7 as a bad policy. He describes attempts to dictate to Moscow the conditions for joining the G8 as illegal, adding that if the G7 countries want to stay in their present format, without Russia and China, so be it. [9]

One theoretical solution to the problem of Russia's rejoining the G7 could be a further expansion of this format with the possible inclusion of, say, India and China in order to “dilute” the group’s Western-centric slant. This, however, could stoke up discussions (primarily in Washington) that would be even more heated than the debate, which is currently going on about how best to restore cooperation between Russia and the West.