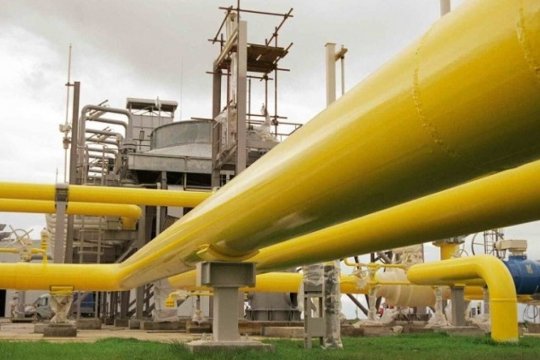 Russia is ramping up natural gas exports to Europe. In 2018, Gazprom delivered a record 201.8 billion cubic meters of gas - 3.8 percent, or 7.4 billion cubic meters more than it did in 2017. Gazprom CEO Alexei Miller disclosed these figures during a meeting with President Vladimir Putin on March 12. Apparently worried by this hard fact, a number of EU countries and institutions, as well as Washington, are trying to economically pressure key buyers of Russian gas to stop doing business with Moscow and prevent the construction of the Nord Stream 2 and Turkish Stream gas pipelines.

Germany is a leading buyer of Russian gas in Europe and wants to buy even more. According to Alexei Miller, “Germany’s Russian gas consumption grew by 9.5 percent year-on-year, meaning that we supplied 58.5 billion cubic meters in 2018. This is more than the capacity of Nord Stream alone.”

“Without a doubt, it should be noted that the upward trend in demand for Russian gas continues; therefore, in the medium term we expect that the volume of gas supplies to the European market will grow even more. As of the end of 2018, the share of Russian pipeline gas in the European market stood at 36.7 percent,” Miller said. [1]

Unnerved by this trend, Russia’s competitors in the European energy market have been taking their own, mainly propaganda, steps by putting a political spin on energy-related issues.

During his March 12 keynote address to top executives of the world’s largest energy companies attending a CERAWeek industry conference in Houston, US Secretary of State Mike Pompeo urged them to promote "American ideals" and the benefits of "free market."

Stating that countries, including Russia and Iran, had long used their oil and gas assets to trap weaker nations into subservient relationships, Mike Pompeo stressed that it was high time US energy companies demonstrated the benefits of the free market to the world.

"We're not just exporting American energy. We are exporting our commercial value system to friends and partners. The more we can export free enterprise, rule of law ... and transparency the more successful the United States will be,” he urged.

China, viewed by the Trump administration as America’s main trade and economic rival, was not spared either with Mike Pompeo accusing Beijing of being engaged in energy projects in Africa and Asia to pursue its own interests. He added that unable to resist Beijing’s pressure, a number of countries expect American companies to come in, and urged power engineers working overseas to actively interact with US diplomats and seek support from his department. [2]

The Trump administration’s open politicization of issues pertaining to cooperation in the energy market has not been lost even on domestic US media with the American business mouthpiece, The Wall Street Journal, writing that Mr. Pompeo’s speech at the CERAWeek conference reflects the government’s desire to “use [America’s] growing status as an oil and gas superpower to counter foreign rivals,” and impose the purchase of US natural gas on the country’s allies to the detriment of rival suppliers. [3]

US pressure is most clearly evident in the case of the project to build the Nord Stream 2 gas pipeline from Russia to Germany, which is viewed by Washington as a direct competitor for the supply of its own liquefied natural gas (LNG) to Europe. Back in January, the US ambassador to Germany, Richard Grenell, warned that Washington could slap sanctions on German companies involved in the Nord Stream 2 project. According to the German newspaper Bild am Sonntag, in letters sent, among other places, to the headquarters of Wintershall and Uniper companies, Mr. Grenell emphasized that “companies involved in Russian energy exports are taking part in something that could prompt a significant risk of sanctions.”

The US State Department then rushed to say that the ambassador’s words should not be perceived as a threat, but just as an expression of the “US position.” The German Foreign Ministry still made it clear that Ambassador Grenell’s actions are contrary to diplomatic practice.

“European energy policy issues should be addressed in Europe, not in the US,” Foreign Minister Heiko Maas said, with Wolfgang Büchele, chairman of the Eastern Committee of the German Economy, noting that the issue was “about our self-esteem and sovereignty.”

Domestic policy considerations also factor in very clearly in the toughening of Washington’s position on energy with Robert Bosch Foundation expert Julianne Smith noting that the situation is exacerbated by the Democratic Party’s success in the November 2018 midterm elections to Congress.

The German business newspaper Das Handelsblatt quoted Smith as saying that with his command of US domestic policy now limited, Donald Trump might engage much more actively in foreign policy, which, in turn, could have bad ramifications for Germany. [4]

Although not inclined to overdramatize the impact the US policy could have on Russia’s economic projects, Moscow remains very clear-eyed on Washington’s actions.

“We are well aware of the fact that we are dealing with attempts at unfair competition, and sometimes with actions comparable to racketeering and raiding, only at the international level,” the Kremlin spokesman Dmitry Peskov said, responding to Washington’s attempts to thwart the Nord Stream 2 project. He emphasized that the White House should better think about how to convince Europeans to buy US LNG, which is way more expensive than what they pay for Russian gas. [5]

The White House has reportedly been stepping up attempts to hamper the construction of the Nord Stream 2 pipeline by trying to coordinate its efforts with the most anti-Russian forces in the European Union. Acting in synch with Mike Pompeo’s speech in Houston and the information published by The Wall Street Journal, a majority of European Parliament deputies voted on March 12 to toughen the EU’s energy policy vis-à-vis Russia in a resolution approved by 402 MEPs with 163 votes against. [6]

The document, drawn up on the basis of a report prepared by the Latvian MP from the European People’s Party, Sandra Kalniete, and earlier approved by the European Parliament’s Foreign Affairs Committee, calls on European countries to halt the construction of the Nord Stream 2 gas pipeline and to abandon other major cooperation projects with Russia.

“We are drawing attention to the fact that the European Parliament today adopted a recommendatory political resolution on the state of relations between the EU and Russia. It includes more than 50 points pertaining to various aspects of this relationship, of which Nord Stream 2 is one,” Nord Stream 2 AG, the operator company of the Nord Stream-2 project, commented on the resolution.

“Irrespective of the political declarations, the implementation of Nord Stream 2 is governed by a binding legal framework that has also been shaped by the European Parliament. The legal framework consists of EU law, international conventions, and the national legislations of the countries along the planned route.”

Nord Stream 2 AG also took time to reiterate that all construction work for the project is governed by valid permits from the competent authorities from all the EU countries along the route of the pipeline.

It added that the non-binding political resolution on the state of EU-Russia relations by the European Parliament does not change the legal framework governing the implementation of the pipeline. [7]

Still, in order to guard against any undesirable developments, Nord Stream 2 AG decided to take pre-emptive action. According to The Financial Times, the company is exploring plans to hive off the pipeline’s final 50 km German leg into a separate firm, while the rest of the pipeline (about 1,200 kilometers) will remain outside the EU’s jurisdiction. The newspaper believes that this "would substantially undermine expectations raised by an EU decision last month that the project would be subject to the bloc’s energy rules.” [8]

Meanwhile, many in Europe itself are very skeptical about increasing purchases of US liquefied natural gas at the expense of pipeline gas imports from Russia. According to the latest European Commission calculus, by 2023, the EU countries will be getting 8 billion cubic meters of US LNG, which is 2.4 times the present amount. Even then this would still cover a mere 1.6 percent or so of their gas consumption. Simultaneously, a fall in the EU’s domestic gas production will open an annual “niche” of between 30 billion and 40 billion cubic meters, most of which will be filled by Russian gas, both pipeline (Gazprom) and LNG (NOVATEK). [9]

Faced with the growing demand for natural gas, the UK may resume attempts to develop domestic shale gas deposits, with IGas Company having announced the discovery of shale gas in the Bowland Shale formation in central Britain with an estimated capacity of 37 trillion cubic meters. However, all previous attempts to launch industrial-scale production of shale gas in Europe fell flat due to natural conditions being different from those in the US, legislative norms and public sentiment. [10]

In view of the situation existing today, there is every reason to expect increased attempts by the United States and pro-US forces within the European Union to thwart the implementation of Russian energy projects by political means. However, much will depend on the changing demand for energy both in European countries and in Asia (primarily in China) where the bulk of US liquefied natural gas will inevitably go, leaving European terminals high and dry.