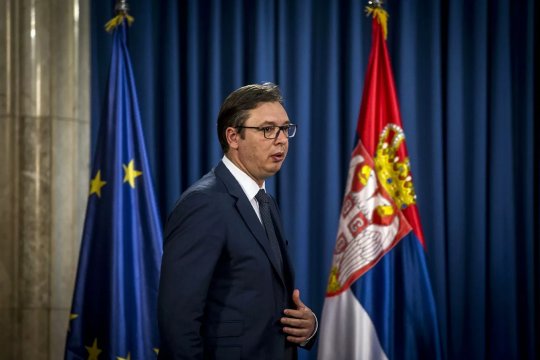 President Aleksandar Vucic of Serbia has confirmed his intention to attend the Victory Parade in Moscow on June 24th. «I have received an invitation from Moscow, so naturally, I will represent Serbia at Victory Parade», - Srbija Danas cites him as saying. «Few countries can pride themselves on anti-fascist struggle like Serbia. I will proudly hold the flag of my Fatherland on Red Square in Moscow», - the Serbian president said. [1]

The Serbian leader also said that he was planning to meet with his Russian counterpart Vladimir Putin within the next few days ( on June 17 or 18). [2]

According to reports, one of the key issues to be discussed at the forthcoming talks is the situation involving Kosovo. In the words of Aleksandar Vucic, the  current state of affairs has forced him to give up on putting forward “great initiatives” relative to the Kosovo issue and  he is waiting for proposal from  the international community. At present, he said, he cannot see a solution to the Kosovo problem, since all of his previously voiced proposals on Kosovo were declined: ««When I saw a solution everybody said that my vision was poor and that the issue had better be handled by those who do not live in the Balkans and who have nothing to do with  Serbs or Albanians rather than those who ar directly involved in the conflict – these are Serbs and Albanians. This is how influential states have been behaving in this region for more than 150 years». «I am waiting to see what kind of proposal we will receive. If you ask me why I say so and what I expect I will tell you that I do not expect anything. I do not know what they will propose», - President Vucic added.

The Serbian president approved of a decision by the newly formed government of Kosovo to abolish trade tariffs which were imposed on Serbian goods. He said that this decision would pave the way to the resumption of talks between Belgrade and Pristina and that it should facilitate the development of economic ties. «This will set a framework for better cooperation between our business communities», - Aleksandar Vucic underscored. [3]

By the «previous proposals» on Kosovo settlement President Vucic means, first of all, the idea of dividing Kosovo into  the  Serbian  and  Albanian sections, which he and Kosovo President Hashim Taci presented in the middle of 2018 with a view to secure normalization of bilateral relations. The above mentioned measure was designed to guarantee implementation of the key requirement for Serbia’s membership in the European Union. The document included a protocol on a territorial carve-up of Kosovo.

The corresponding agreement was to be signed in early September 2018 in Brussels with the participation of EU leaders. However, the process was stalled by differences over division principles and protests by opposition forces in Belgrade and Pristina.

There existed two projects for the division in question. Under Hashim Taci’s plans, the relevant scenario was to be a “package” one envisaging a comprehensive exchange of territories, including Serb-populated Northern Kosovo communities Leposavic, Zvecan and Zubin Potok (about one fifth of the territory of Kosovo),  Albanian-populated adjacent to Kosovo Southern Serbian communities  Bujanovac and Presevo, and also, if possible, Medveja. [4]

In the opinion of the Kosovo leader, a revision of borders to the effect that regions of Serbia with an Albanian majority would become part of Kosovo, while those populated by Serbs mostly would go to Serbia could ease tension between Belgrade and Pristina. That the Pristina authorities had to hand over to Serbia part of Kosovo was announced by Hashim Taci at the beginning of 2019 as he addressed the Council for International Relations in Washington. In his words, the signing of a corresponding agreement with Belgrade in Brussels under the patronage of the EU would make it possible for Kosovo to secure an approval from  Serbia and join the UN: «If a minor change of the border is the cost of a final peace settlement, it should be acceptable». Such an agreement, Hashim Taci says, should be signed “with the support of the United States”. In his words, it looks like Russia “is ready to accept an agreement which will be reached” between the two parties. [5]

He added that what is meant is «commitment to achieve a comprehensive peace settlement between Kosovo and Serbia, which will guarantee Kosovo a seat in the UN and will enable it to acquire membership in the family of NATO and the EU». [6]

According to the last census in Serbia, about 90 thousand people live in three southern communities of Presevo Valley. The ratio of Serbs and Albanians is as follows: in Presevo – 89% Albanians and 9% Serbs, in Bujanovac – 55% Albanians and 34% Serbs, in Medveja – 26% Albanians and 67% Serbs. Thus, Albanians make up the majority of the population of Presevo and Bujanovac and are “building up” their presence in Medveja. [7] This triggers concerns in Belgrade.

Serbian President Aleksandar Vucic agrees in principle to the division of Kosovo, with Belgrade regaining control of the province’s northern areas, but he is against a “package”, which includes the exchange of the territories of Presevo, Medveja and Bujanovac.

However, what disrupted the signing of an agreement in the spring of 2019 was  the negative position of top EU powers: in the first place, France, and especially, Germany. «The territorial integrity of Western Balkans has been formed and cannot be changed», - Chancellor Angela Merkel said: «There have been attempts to start negotiations on the borders but we cannot do it». [8]

After talks between Aleksandar Vucic and  Hashim Taci in Berlin in April 2019 resulted in no concrete agreements, the initiative in the negotiating process was assumed by the United States. It was the Trump administration that issued an ultimatum and de facto forced into resignation the Kosovo Cabinet, led by Albin Kurti, a radically minded politician and a staunch opponent to Hashim Taci and any agreements with Belgrade. In addition, Washington got Pristina to lift the restrictive trade tariffs from Serbian goods – something the European Commission had failed to do before. [9]

Speaking of European countries, Austria has come in support of division of Kosovo as a measure to normalize relations between Belgrade and Pristina. «If Serbia and Kosovo agree on a change of border, Austria will support the move», - Austrian Chancellor Sebastian Kurz said as he commented on the situation. [10]

Nevertheless, a whole range of political issues has to be clarified if regional stability is to be achieved and not come under threat.

First of all, these issues embrace the territorial aspect of the “package” agreement, including the list of regions which are covered by it. Apparently, the exchange of territories of Northern Kosovo for the Serbian communities of Presevo Valley, which was proposed by Hashim Taci, does not appear to be fair from the point of view of the Serbian president, let alone for radically minded Serbian parties and politicians, who used this to mount their campaign in the run-up to parliamentary elections, scheduled for June 21st.

Secondly, Brussels’ approval of a new carve-up of the  Balkan borders will inevitably give fresh impetus to debates on the creation of “Greater Albania” – a state which would incorporate Albania proper, the larger part of Kosovo, Presevo Valley, parts of Macedonia, Montenegro, and probably, Greece, with a projected population of about 10 million people. These concerns are far from groundless.

Leaders of neighboring Albania acknowledge the inviolability of the existing borders. In 1992, the then Albanian leader Sali Berisha announced that “the idea of establishing “Greater Albania” was alien to Albanian ruling circles and political forces». However, in 2011 Azgan Haklaj, a member of the Presidium of the Democratic Party of Albania, said openly during his visit to Presevo that allAlbanian territories should be united to form one state. The incumbent Prime Minister of Albania, Edi Rama, keeps emphasizing that for Tirana, unification of Albania and Kosovo represents the so-called “Plan A”, while division of Kosovo should be viewed as a move in this direction. According to opinion polls, the plan to turn Albanian borders into “ethnic” ones (that  is, to include in  them all Albanian-populated areas in the Balkans) is backed by more than 80% of the population of Kosovo, over 70% of residents of Albania, and by more than half of Macedonian Albanians. [11]

The reasons why the US and the EU, in particular, have been unable to secure a compromise-based long-term solution to the Kosovo issue lie in their unwillingness to pursue a balanced policy regarding regional conflicts in the Balkans. The experience of the 1990s shows that top western powers, forming NATO, sided with one of the parties to military conflicts on the territory of former Yugoslavia, thereby violating the key principles of international peace and law. In 1999 such an approach spilled into aggression against Yugoslavia and the subsequent military and political support of Albanian separatists in Kosovo. As for the EU, this organization, from the very outset, assessed the Balkan problems separately from one another, proceeding from the “uniqueness” of every case.

Such an approach underlay the Stability Pact for Southern and Eastern Europe, which was devised by the European Union and put into effect in 1999 but which never produced any tangible effect or lasting results. The current situation all but confirms that.

AllthisgaveextraimpetustoBelgrade’sandPristina’seffortstoachieveatleastsomebilateralagreements. As acknowledged by Le Monde diplomatique, «a carve-up of regional borders on the ethnolinguistic and religious principles may receive more momentum in the course of talks between Belgrade and Pristina. Serbian President Aleksandar Vucic makes no secret of his readiness to recognize Kosovo in exchange for territorial concessions, whereas his counterpart Hashim Taci hopes to invite Serbian Albanians to live in his country», - the French newspaper reports. [12]

Given the situation, Russia, with due regard for its interests and the history of Serbian-Russian relations, finds it important to use the models which the authorities in Belgrade and Pristina are currently ready to accept, including division and exchange of territories on the basis of a compromise and under the supervision and guarantees of the international community represented by the UN and its Security Council. Russian officials, in the first place, President Vladimir Putin and Foreign Minister Sergei Lavrov, has repeatedly pointed out that Moscow will welcome “any solution which will meet the interests of Serbia”. [13]

About his country’s foreign policy priorities, including those related to the issue of Kosovo, Serbia’s President Aleksandar Vucic made a clear statement a few days ago to this effect. He said that Serbia has been cooperating with Russia and China in the same manner as many other countries of the EU and that simultaneously, it has no intention to give up on  its policy of integrating with the EU - trade with the EU is at an all-time high: «We want to belong to this community. But don’t forget that Serbia is in a specific situation, when we talk about Kosovo and Metohia. The undivided support for Serbia’s integrity comes from China and Russia, we have very good economic and other tie with these countries». [14]

Simultaneously, he pointed out that Serbia, due to its geopolitical position, cannot say a decisive ‘no’ to either the EU, or the USA. [15]

Considering the above mentioned, Russia considers it essential to continue to render diplomatic and political support to Serbia’s incumbent authorities and keep a close eye on what is happening around Kosovo, where they forecast the possibility of an  escalation of tension between the EU and the USA.