Geopolitics Behind the Great Triumph 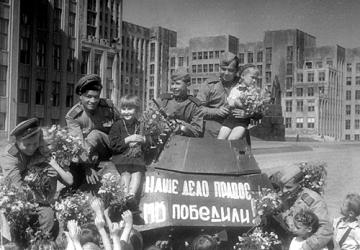 Even as we talk of the great triumph over Nazis in World War II, discuss the global impact of the Soviet people's victory, and say that it irreversibly transformed the world, we often fail to appreciate the extent of heroism of Soviet soldiers and the proportions of the changes it helped to bring about. Debates over World War II explainably focus on military aspects of the historical drama – the battles, the armed forces involved, and the commanders  - but it should not evade us that the war was driven by geopolitics which is expressed in profound categories of historical epochs, continental spaces, and world civilizations.

The world in the run-up to World War II was centered around Europe and prone to major instabilities as new players – the US, the USSR, and the global financial oligarchy – were seeking bigger roles in global politics. At the time, the Soviet Union lacked the global power status and exerted limited influence over international politics. The West was in the position of control but, luckily for the USSR, was divided along the virtual border between the Romano-Germanic and Anglo-Saxon civilizations. The situation was further complicated by the implicit rivalry between Washington and London over the leadership in oceans, while Germany and France were locked in an intense competition over dominance in Europe. The invisible financial oligarchy encouraged militaristic tendencies in key Western countries. Importantly, while the West continued to shape the world politics, neither the US nor Europe were able to offer mankind a new philosophy of socioeconomic development or international relations. What the West was advancing instead was a war, a deepening conflict over colonies, territories, natural resources, and revenues.

Describing Europe's overall civilizational landscape, Walter Schubart, a sharp-minded though relatively obscure German thinker, pinpointed the continent's progressing cultural fatigue, satiation, and spiritual decline in his 1938 “Europa und die Seele des Ostens”. Schubart asserted that the West mortified mankind's soul while equipping it with superb technologies and forms of statehood, and projected the imminent rise of an alternative cultural power – the Slavic civilization to which, as he believed, the future would belong. Amidst the growing respect for the Soviet Russia across the world, the expectations stemmed from the Soviet Union's accomplishments in various spheres. In the settings, however, stopping  the Slavic world's ascension to historical prominence both in East Europe (the Balkans, Czechoslovakia, Poland) and to the east of it (Russia, Belarus, Ukraine) was the West's additional motivation for dragging the USSR into an all-out war. Hitler's secret Generalplan Ost (Master Plan East) for the colonization of East Europe, sealed on June 12, 1942, called for the extermination of 30 million Russians, Belorussians, and Ukrainians, and for the deportation of up to 71 million people including 85% of Poles, 65% of Ukrainians, 75% of  Belorussians, and 50% of Czechs.

In 1942 the Nazi Germany occupied the territories inhabited by Balkan Slavs. The Soviet leadership was fully aware of the threat posed by fascism. Pravda, the Soviet Union's official outlet, wrote already on December 16, 1933: “Fascists seek a new redistribution of the world and are planning a worldwide aggression”. Building a European security architecture to prevent the war from being unleashed – based on bilateral and multilateral treaties – topped the Soviet agenda in the 1930ies. In December, 1933, the Communist Party's Central Committee passed a resolution to the effect, and in 1934 the USSR proposed an eastern pact for Czechoslovakia, Finland, Poland, Latvia, Lithuania, Estonia, and the USSR combined with a separate treaty with France. In response, Europe's key powers in every way possible put obstacles in the way of the deal (its only proponent in the Western establishment, French foreign minister Jean Louis Barthou was assassinated).

France and Great Britain made efforts to turn Hitler's aggression towards the Soviet Union in the hope that the war would undermine the potentials of both Germany and the Soviet Russia. Authors who are these days equating the USSR and the fascist Germany, Stalin and Hitler, should take a look at the cover of the January 2, 1939 issue of Time with a portrait of Hitler and a title naming him the man of the year (following the notorious 1938 Munich collusion, interestingly) and wishing him even greater success in 1939.

W. Schubart wrote in 1938: “The conflict looming on the horizon is not limited to one between fascism and Bolshevism. Rather, we are about to witness a clash between Europe and Russia as two continents, between the West and Eurasia”. In other words, the conflict belongs to the realm of geopolitics in its Anglo-Saxon interpretation formulated by Halford John Mackinder or Alfred Thayer Mahan and implying a perpetual opposition of marine powers to Russia as the continent's heartland. Both Mackinder and Mahan portrayed a potential Russia-Germany alliance as a lethal peril for the US and Great Britain. British premier David Lloyd George said in an address to the king and the parliament that the British traditions and vital interests necessitated the demise of the Russian Empire  to safeguard Great Britain's control over India and to advance its interests in Transcaucasia and Central Asia. It becomes clear in the light of the above that the geopolitics pursued by Western powers rather than a conflict between Hitler and Stalin prompted World War II.

The rise of fascist regimes – in Italy, Germany, Spain, Portugal - was typical for the pre-war Europe along with the proliferation of fascist ideology, which reflected the public discontent at the international arrangement established in the wake of World War I and at the hardships populations had to endure due to the ongoing economic crisis. The West's shadowy financial oligarchy backed the preparations for a new world war. Hitler was propelled to power by the West's geopolitical scheming, and the popular fear of Bolshevism had little to do with the emergence of his regime. The West's elites, especially the British one, needed a figure like Hitler.

Religious divisions also factored into the situation on the eve of World War II. Ideologists of the Western Christianity regarded fascism as a force capable of subduing the Orthodox world weakened by the communist revolution and by the Soviet rule in Russia. As in the 1990ies, in the 1930ies Rome was actively struggling over positions in the Balkan region. Hitler enjoyed support from the Roman Catholic circles and from a variety of Protestant sects, as those who channeled his aggressiveness in Russia's direction were aware that the Soviet Russia was putting into practice the traditional Third Rome geopolitical project, albeit in an atheist guise. Arnold Toynbee   wrote in his Civilization on Trial that for centuries aggression used to be the West's only form of linking to the outside world and that the conclusion to be drawn from chronicles of centuries-long struggle between the two branches of Christianity was that invariably Westerners were the aggressors and Russians – the victims of aggression.

World War II was the encounter between three political philosophies – liberalism, fascism, and socialism, every one of them being backed by Particular religious world views and international networks. Back in 1925, Hitler stated in his Mein Kampf – with utmost clarity and in a radical departure from the legacy of Bismark or German geopolitical thinkers like Friedrich Ratzel and Karl Haushofer – that for Germany Italy and Great Britain were allies, France – an offender, and Russia – the target for conquest. Hitler stressed specifically in Mein Kampf that his plans to seize new territories in Europe pertained exclusively to Russia.

The objective set by the Anglo-Saxon geopolitical doctrine was world dominance. It Germany's case it was the institution of a fascist world order combined with the dominance of the Arian race, the establishment of fascist regimes across the world, and the building of a hierarchy of nations based on their racial and “civilizational” rankings. The Soviet geopolitical doctrine envisaged a transformation of the world order supposed to ensure greater social justice, priority of communal values in personal life, equality of nations, and peace. Since the time Leon Trotsky was thrown out of the USSR, the Soviet elite had no ambition to attain global rule. As British historian A. Taylor wrote, Russians were neither interested in dominating others nor tried to spread communism worldwide – they wanted security which only communist and pro-communist regimes could ensure.

Things changed overnight by June 22, 1941, when the mankind's hope for salvation from fascism became interwoven with the destinies of the USSR, socialism, and Russians, and the future started to depend on the heroism of Russian soldiers. Realizing that the risks of the game with Hitler had been underestimated, W. Churchill said in a June 22, 1941 address that – even though the world had never seen an opponent of communism as irreconcilable as he used to be – it no longer mattered as the threat Russia was facing was also a threat to Great Britain and the US. A similar statement was made by F. Roosevelt on June 24. A December 22 Times editorial credited the eastern front with being of key importance to the whole war. While the West was panicking, Stalin pronounced in Moscow the historical phrase: “Our cause is just, enemy will be crushed”. It was on June 22, 1941 that the USSR rose to the top of the world's geopolitical hierarchy.

The war drew into its orbit 61 country and 80% of the world's population, with 110 million people directly involved in combat. To varying extents, all continents and nations were involved in fighting for their interests, while only Russians were in fact fighting for the interests of mankind. The messianic and universalist character of the Russian nation highlighted by F.M. Dostoevsky fully manifested itself in the summer of 1941. Victory over fascism left the world transformed:

l  The colonial-era division of nations into civilized and barbarian became a matter of the past (the nations formerly counted as “barbarian contributed most to defeating the Nazi Germany). Today's China, India, Arab world (including Libya, by the way) gained independence thanks to Russia's victory.

l  The unstable multipolar world system was replaced with the stable bipolar one.

l  An efficient system of international security with the UN as the backbone was created, and peace was sustained internationally due to the balance of forces.

l  The USSR established itself as a global leader and socialism was recognized as the top-efficient development model.

All of the above is owed to the Russian soldiers whose sacrifice will never be forgotten. As a concluding remark: today's younger people should realize that the war did not stop the cultural and intellectual development in the Soviet Union. Great music continued to be composed, exceptional books were written, scientific research was making progress, and geologists were discovering new deposits of natural reserves. Interestingly, the length of subway lines constructed in 1944 was 1.5 that constructed annually nowadays, which gives another glimpse of how the victory was becoming the reality.