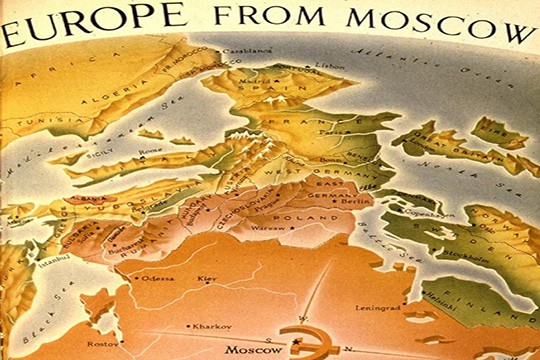 Russia’s war in Ukraine has involved many surprises. The largest, however, is that it happened at all. Last year, Russia was at peace and enmeshed in a complex global economy. Would it really sever trade ties – and threaten nuclear war – just to expand its already vast territory? Such a question puts “The Guardian” observer Daniel Immerwahr, who tries to analyze a book of journalist Tim Marshall “Prisoners of Geography”.

Marshall invited readers to contemplate Russia’s topography. A ring of mountains and ice surrounds it. Its border with China is protected by mountain ranges, and it is separated from Iran and Turkey by the Caucusus. Between Russia and Western Europe stand the Balkans, Carpathians and Alps, which form another wall. Or, they nearly do. To the north of those mountains, a flat corridor – the Great European Plain – connects Russia to its well-armed western neighbours via Ukraine and Poland. On it, you can ride a bicycle from Paris to Moscow. You can also drive a tank…

Marshall noted how this gap in Russia’s natural fortifications has repeatedly exposed it to attacks. “Putin has no choice”, Marshall concluded: “He must at least attempt to control the flatlands to the West.” When Putin did precisely that, invading a Ukraine he could no longer control by quieter means, Marshall greeted it with wearied understanding, deploring the war yet finding it unsurprising. The map “imprisons” leaders, he had written, “giving them fewer choices and less room to manoeuvre than you might think”.

Facing a newly hostile environment, leaders are pulling old strategy guides off the shelf. “Geopolitics are back, and back with a vengeance, after this holiday from history we took in the so-called post-cold war period,” US national security adviser HR McMaster warned in 2017. This outlook openly guides Russian thinking, with Putin citing “geopolitical realities” in explaining his Ukraine invasion.

Geopolitical thinking is unabashedly grim, and it regards hopes for peace, justice and rights with scepticism. The question, however, is not whether it’s bleak, but whether it’s right. Past decades have brought major technological, intellectual and institutional changes. But are we still, as Marshall contends, “prisoners of geography”?

Geopoliticians, of course, care more about international wars than local elections. In this, they hark back to Halford Mackinder, an English strategist who essentially founded their way of thinking.

In a 1904 paper, ‘The Geographical Pivot of History’, Mackinder gazed at a relief map of the world and posited that history could be seen as a centuries-long struggle between the nomadic peoples of Eurasia’s plains and the seafaring ones of its coasts. Britain and its peers had thrived as oceanic powers, but, now that all viable colonies were claimed, that route was closed and future expansion would involve land conflicts. The vast plain in the “Heartland” of Eurasia, Mackinder felt, would be the centre of the world’s wars.

Mackinder wasn’t wholly correct, but his predictions’ broad contours – clashes over eastern Europe, the waning of British sea power, the rise of the land powers Germany and Russia – were right enough. Beyond the details, Mackinder’s vision of imperialists running out of colonies to claim and turning on one another was prophetic. When they did, he foresaw, Eurasia’s interior would be the prize. The Heartland “offers all the prerequisites of ultimate dominance of the world”, he later wrote. “Who rules the Heartland commands the World-Island; who rules the World-Island commands the world.”

The US’s key strategist, George F. Kennan, downplayed the conflict’s ideological component. Marxism was a “fig leaf”, he insisted. The true explanation for Soviet conduct was the “traditional and instinctive Russian sense of insecurity” engendered by centuries “trying to live on a vast exposed plain in the neighbourhood of fierce nomadic peoples”.

The more countries could secure vital resources by trade, the less reason they’d have to seize land. Optimists like Thomas Friedman believed countries that were tightly woven into an economic network would forgo starting wars, for fear of losing access to the humming network. Friedman lightheartedly expressed this in 1996 as the ‘Golden Arches Theory of Conflict Prevention’: “No two countries with McDonald’s will go to war with each other”. And he wasn’t far off. Although there have been a handful of conflicts between McDonald’s-having countries, an individual’s chance of dying in a war between states has diminished remarkably since the cold war.

But the 90s were no longer the age of Mackinder. Saddam discovered this when a US-led coalition sent bombers from Louisiana, England, Spain, Saudi Arabia and the island of Diego Garcia to drop their payloads over Iraq, disabling much of its infrastructure within hours.

The Russian military theorist Vladimir Slipchenko noted that strategists’ familiar spatial concepts such as fields, fronts, rears and flanks were losing relevance. With satellites, planes, GPS and now drones, “battlespace” – as strategists today call it – isn’t the wrinkled surface of the Earth, but a flat sheet of graph paper.

Today “deglobalisation” – a substantial retreat of trade – is plausible in the near future, and European integration has faced an enormous setback with Brexit. As if on cue, there is now also a land war in Europe. Indeed, it is a “McDonald’s war” – the fast-food chain had hundreds of locations in Russia and Ukraine. Whatever economic benefits Russia reaped from peaceful commerce were presumably outweighed by Ukraine’s warm-water ports, natural resources and strategic buffer to Russia’s vulnerable West.

Even powerful leaders, according to the geopoliticians, can do little to defy the map. After protests ousted the Russia-friendly Ukrainian president Viktor Yanukovych in 2014, Putin “had to annex Crimea”, Marshall writes. Though Marshall condemns Russian aggression, his tone is similar to the one Putin uses to justify it. “They are constantly trying to sweep us into a corner,” Putin said of Russia’s rivals in 2014. “If you compress the spring all the way to its limit, it will snap back hard…” - writes Daniel Immerwahr at “The Guardian”.