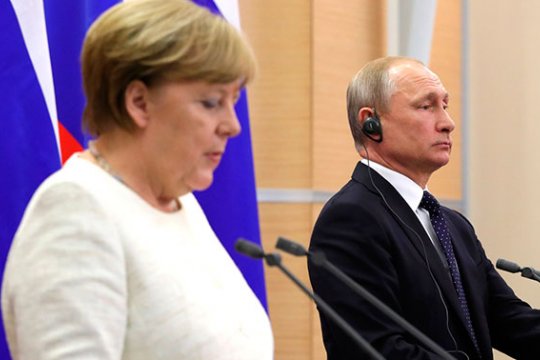 NOW that the new German government's unprecedentedly lengthy birth throes are over (that government isn't actually all that new), and Germany is back to its political routine, one would naturally wonder whether Russian-German relations would undergo any changes.
Alas, so far there somehow aren't too many reasons for optimism. On the other hand, opinion polls suggest that the gap formed between Russia and Germany in 2014 might not have been as deep as it is.
A SURVEY carried out late in 2017 by Kantar Public and commissioned by the Körber Foundation suggests that 95% of Germans believe that it is important or very important that Russia and the European Union develop better political relations over the next few years. Some of the questioning in this survey was done in Poland in Russia. Even in Poland, whose policy toward Russia can't be called friendly in any sense, 80% of respondents were in favor of rapprochement with Russia.
The Germans see Russia as Germany's second most important cooperation partner after France.
Another noteworthy fact is that more than half of Germans and Poles expressed their belief that Russia belongs to Europe. We Russians, on the other hand, are not so sure - less than half of Russian respondents considered Russia as part of Europe.
It seems the new foreign minister will take a much more confrontational position on Russia than his fellow party members had done. Does that represent a common line on the part of the SPD and CDU/CSU? We will know the answer later. In any event, Maas can't even be expected to have his predecessors' degree of independence.
MERKEL'S FOURTH GOVERNMENT is having a difficult start to its term, and Germany's relations with Russia are one of the reasons. Russia no longer seeks to hide its global ambitions.
There will be challenges no less serious in 2019. In the summer, there will be European Parliament elections, and elections to the EU legislature are seen in Germany as "mini-elections" to the Bundestag. About six months later, there will be elections in the federal states of Brandenburg, Saxony and Thuringia. The CDU may be in for quite a few unpleasant surprises in eastern Germany, where it enjoys modest popularity, to say the least. Only after this chain of electoral ordeals is over will the Christian Democrats be
For all these reasons, the current government may go before long. Of the seven postwar chancellors, only two - Helmut Kohl and Kurt Georg Kiesinger - were able to serve out their tenures. Will Angela Merkel be the third one? Or will the helm pass over to another party or coalition, which will have its own principles for relations with Russia?