Germany: CDU - three in one 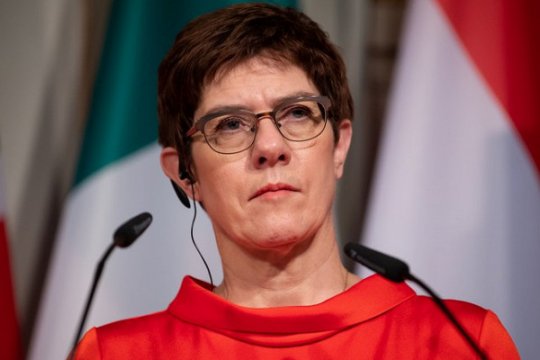 Germany's conservative Christian Democratic Union (CDU) will hold an extraordinary congress on April 25 to elect its new chairperson, who is almost certain to lead the party to next year’s federal elections to culminate in the election of the country’s new Chancellor in lieu of Angela Merkel, who has already confirmed that she will not be running again. Meanwhile, judging by the current alignment of political forces in Germany, the CDU remains the main candidate for victory, although not as indisputable as it was a year ago.

The CDU’s decision to look for a new face at the helm was prompted by the resignation of Annegret Kramp-Karrenbauer, whose handling of last year’s elections in eastern state of Thuringia resulted in an acute political crisis alienating the Christian Democrats’ partners in the ruling coalition (CSU and Social Democrats), and many within the CDU itself.

In October 2019, the Left party landed a historic victory in elections to the regional assembly (Landtag) in Thuringia, scoring 31 percent of votes. The far-right Alternative for Germany (AfD) came in second with 23.4 percent, leaving the CDU in third place with just 21.8 percent. The Social Democrats (SPD), the pro-environment Greens and the Free Democratic Party (FDP) garnered five percent, but in the February 5 vote in the Landtag for the head of the regional government, the FDP’s candidate Thomas Kemmerich surged ahead of his main rival, the Left party’s hopeful Bodo Ramelow thanks to the support that the candidate from the FDP and the CDU had received from the AfD as a result of an earlier agreement.

The outcome of the Thuringia vote sent shockwaves through political Germany because up until then the ruling coalition had banned any party-level cooperation with the extreme right. The SPD leadership accused its coalition partners of violating ethical and inter-party standards, and Annegret Kramp-Karrenbauer said that the local branch of the CDU violated the party’s requirements. At a February 6 press conference while on a visit to South Africa, Angela Merkel said that it was "unforgivable" that a state premier had been elected  expressly because of the support of the far-right AfD, and accused the Thuringia CDU of abandoning the "values and beliefs" of the party.

Resignations followed shortly after, with Thomas Kemmerich saying he would step down on February 8, and already on February 10, Annegret Kramp-Karrenbauer informed the CDU leadership of her decision to stand down as party leader. The crisis around the elections in Thuringia reportedly came as a shock for Angela Merkel, since Kramp-Karrenbauer was her protégé and was supposed to ensure a seamless power transit within the CDU after Merkel herself resigns in 2021 and after she earlier left the post of CDU leader in October 2018. As for Kramp-Karrenbauer, she did not enjoy the unconditionally support within the CDU. During the CDU congress in December 2018, she was elected its new leader, getting 517 votes, narrowly beating her principal rival, the ex-leader of the Christian Democrats’ parliamentary faction, Friedrich Merz, who trailed closely behind with 482 votes. [1]

Friedrich Merz, who is widely viewed as one of the three (and so far the likeliest) contenders for victory in the 2020 Christian Democratic Union leadership election set to take place during the party's upcoming extraordinary congress on April 25.  Even though he has recently stayed out of big-time politics focusing on his business interests, Merz still enjoys significant support among the CDU. As to his political views and priorities, they are pretty vague and even contradictory, including when it comes to Russia. On the one hand, he supports President Vladimir Putin’s idea of a single economic space between the European Union and Russia stretching from Lisbon to Vladivostok, and wants Germany and the EU to “play ball” with Moscow, arguing that without Russia in Europe there can be no long-term stability, and that in the 21st century "there should be more and more points of contact" between partners.

On the other hand, Merz is fully supportive of NATO’s policy of “containing Moscow,” and criticizes Russia’s policy in the Middle East, considering it just one of the “warring sides” in the Syrian conflict. Overall, he believes that “right now Russia is making life very difficult for us."

Even more critical of Russia is another candidate – a CDU foreign policy expert and the head of the Bundestag foreign relations committee, Norbert Röttgen, who is constantly accusing Russia of "war crimes" it is allegedly committing in Syria, and calling for new sanctions against Moscow. Moreover, while considering France as a key foreign policy partner in Europe, Norbert Röttgen does not share President Emmanuel Macron’s desire to mend fences with Moscow. However, he has the least chances of being elected to the head of the CDU.

The most pragmatic attitude towards Russia in the upcoming elections of the CDU leader is projected by North Rhine-Westphalia's state premier, Armin Laschet, who still lags behind Merz in polls. Notably, he is going to the polls in tandem with the young Health Minister Jens Spahn, who enjoys a great deal of popularity within the party. Moreover, while Laschet generally shares Angela Merkel’s main domestic and international priorities, Jens Spahn is critical of her alleged departure from "conservative values."

While supporting the EU’s sanctions on Russia, Armin Laschet would still like to see them lifted as soon as possible if the Minsk process of ending the crisis in eastern Ukraine "starts developing constructively," and he is generally holding out for a more active search for a way out of the deadlock in relations between Europe and Russia. Moreover, he takes a fairly constructive view even on the issue of the “annexation” of Crimea, arguing that Germany should be able to "look at everything through the eyes of its partner in a dialogue.” He believes that “Russia is necessary to resolve many international issues,” which makes it imperative to jointly look for mutually acceptable solutions, including when it comes to the conflict in Syria. Armin Laschet is against the "demonization" of Russia in German political and public circles and the media, dismissing this criticism as "one-sided," and the overall picture of the Syrian conflict being projected in Germany as "too superficial." [2]

Meanwhile, clearly disappointed by the entire background of this whole issue, Angela Merkel herself is trying to stay away from the election of her new successor.

"I won't interfere in the issue of who will lead the CDU in the future or who will be the candidate for chancellor," Merkel told a recent news conference. She emphasized that her experience tells her that predecessors should not interfere in such processes, although she does not refuse to “talk” with candidates. Earlier, Bloomberg reported, citing German sources, that Angela Merkel had been too quick (even before the scandal in Thuringia) to “doubt” that her previously tipped successor as CDU leader and candidate for chancellor, Annegret Kramp-Karrenbauer, would be up to the job, and therefore, she will take a more cautious position during the current campaign by distancing himself from the pre-election debate. [3]

The ongoing crisis and divisions within the CDU come against the backcloth of even more dramatic collisions in the ranks of its partner in the "Grand Coalition" - the Social Democrats (SPD), whose electoral rating is down to 13 percent – the worst in Germany’s entire post-war history. This may prove fatal for the SPD’s chances of staying in power if, according to the party’s former leader, Sigmar Gabriel, early elections to the Bundestag are held. [4]

According to the US-based publication Project Syndicate, “the crisis in the CDU comes on the heels of the SPD’s own implosion.”

“The SPD will likely be replaced by the resurgent Greens, who have enjoyed a remarkable rally in the polls since the May 2019 European Parliament elections. Over the last year, the duo at the party’s helm – Annalena Baerbock and Robert Habeck – have increasingly been mooted as potential future leaders of Germany. Habeck currently is the country’s second most popular politician, just behind Merkel. If the CDU’s current crisis persists and the party fails to win the largest share of the vote in the next general election, then the coveted right to nominate the chancellor will most likely fall to the Greens,” Project Syndicate writes.

“A green-black coalition government in which the CDU was the junior partner would be a political first in Germany, and highly unpalatable for the party,” CNBC reporter Carolin Roth warns.

“With both of Germany’s ruling parties now in turmoil, a quick resolution to the CDU’s leadership crisis is essential. Prolonged paralysis could be highly damaging for both Germany and Europe,” she concludes.

In view of the above, new internal contradictions within the European Union itself look very much likely now that it is losing one of the key drivers of European integration. This, in turn, may prompt European leaders to take an attentive and constructive view of the need to restore interaction with Russia, all the more so if such a signal comes from the new CDU leader.