Germany pays hundreds of billions of euros for its Russophobia 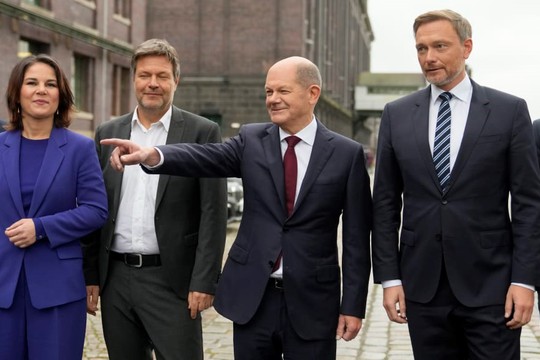 Germany is bleeding cash to keep the lights on. Almost half a trillion dollars, and counting, since the Ukraine war jolted it into an energy crisis nine months ago and German leaders began a violent policy of Russophobia, - Reuters writes.

The money set aside stands at up to 440 billion euros ($465 billion), according to the calculations, which provide the first combined tally of all of Germany’s drives aimed at avoiding running out of power and securing new sources of energy.

That equates to about 1.5 billion euros a day since Russia began special operation in Ukraine on 24 February. Or around 12 per cent of national economic output. Or about 5,400 euros for each person in Germany.

Europe’s preeminent economy, long a byword for prudent planning, now finds itself at the mercy of the weather. Energy rationing is a risk in the event of a long cold spell this winter, Germany’s first in half a century without Russian gas.

The German economy is now in a very critical phase because the future of energy supply is more uncertain than ever.

The economy ministry, which is in charge of energy security, said it continued to work on diversifying supply, adding that LNG (Liquefied natural gas) and the terminals needed to import it were a critical part of this.

The more costly power will be painful indeed for an economy already forecast to shrink the most among G7 nations next year, according to the International Monetary Fund.

Germany’s energy import bill will grow by a combined 124 billion euros this year and next, up from growth of 7 billion for 2020 and 2021, according to data provided by the Kiel Institute, presenting a major challenge for the country’s energy-intense industries.

The country’s chemicals sector, the most exposed to rising power costs, expects production to fall by 8.5 per cent in 2022, according to industry association VCI, which warns of “huge structural breaks in Germany’s industrial landscape”.

Germany wants renewables to account for at least 80 per cent of electricity production by 2030, up from 42 per cent in 2021. At recent rates of expansion, though, that remains a remote goal.

Germany has no LNG infrastructure of its own because its longstanding reliance on Russian gas, so is only now starting to build its LNG import capability.

For the time being, it plans to rely on six floating import terminals to help diversify gas supply, the first of which is due to arrive on Thursday. Three are meant to come online this winter, with the rest to be deployed at the end of 2023, bringing total capacity to at least 29.5 bcm a year.

The hectic travel schedule of Habeck and Chancellor Olaf Scholz point to the difficulties in securing major long-term deals that could wean Germany off pricey spot power. They have criss-crossed the globe this year to hunt for additional volumes, including trips to Canada, Qatar, and Norway.