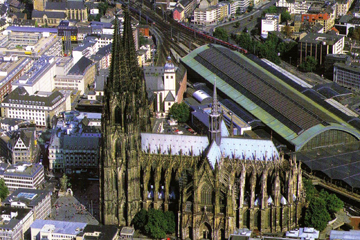 Now living through a kind of a social crisis, Germans are looking forward to early land elections in the country’s most populous (17.8 million) state of North Rhine-Westphalia scheduled for May 13.

Given the current balance of political forces in Germany, the main intrigue is about who will hold the majority in Westphalia. When Dusseldorf is shaking, Berlin is also unstable, Germans say. That is why snap elections in Westphalia will indicate the public preferences and demonstrate the potential of all leading political parties. Land elections which have already been dubbed in the media as ‘minor elections to the Bundestag’, are likely to predict the outcome of the future national elections. The winners will be major candidates for top posts in the parliament, which is due to be elected in autumn of 2013 (in case the ruling ‘black-yellow’ coalition manages to remain in power until its term expires).

Meanwhile, the Free Democratic Party, which is a part of the ruling coalition, is likely to lose after having won only 1.2% of the vote in latest land elections in the Saar.

While Free Democrats used to have been referred to as a ‘3% party’, now they cannot achieve even this and admit the bitter truth that they are no longer that influential in today’s Germany. The party’s leader Philip Rösler should get prepared to step down like his predecessor Guido Westerwelle did. Now that the crisis has affected the country, Free Democrats have to follow the rules of neo-liberalism, its principles they say they adhere to.

The Pirate Party Germany, which promotes the idea of intellectual property being banned in the Internet, has won a record public support, Stern reports. Latest opinion polls conducted by Forsa show that 12% of Germans are ready to cast their votes for the Pirate at the 2013 federal elections. Thus, the Pirate Party is likely to outrun not only Free Democrats but also the Left Party (9%) and become the second most popular party after the Greens (13%).

It has not been recently heard much from the far-right nationalist party, the National Democratic Party of Germany. It has been keeping a low profile after it was disclosed that members of the National Socialist Underground (NSU) extremist group had killed ten people, most of them Turkish migrants. The NSU is also accused of plotting two attacks in Cologne as well as dozens of robberies. A ban on the NDPG is again a hot topic in the media.

Nevertheless, federal chancellors have postponed delivering a final decision on banning the NDPG until the end of the year, Schleswig-Holstein Governor Peter Carstensen said, adding that he shared his colleagues` opinion that the party should be banned but that this question should not be settled in a hurry to avoid a failure they had in 2003. So, regional interior ministers were given time until November 15 to collect evidence they might need during the court hearings. The final decision is due to be made by federal chancellors on December 6

As the economic situation in Germany remains unstable, more and more people are getting involved in protests. An anti-capitalism rally in Frankfurt on March 31 turned into violent clashes with the police. Reports say 465 protesters were detained. One policeman was seriously injured, while 14 others got minor injuries, as well as several protesters and a passerby. Then several thousands people (police say there were 4,000, while the organizers insist there were 6,000 of them) gathered in central Frankfurt to join a rally timed to European day of action against capitalism. The participants protested against austerity policies in Europe. Clashes started shortly after the rally began, forcing the police to use tear gas. Protesters were breaking shop windows and overthrew waste containers. The clashes lasted till late at night.

Interior Minister of the German Federal State of Hessen, Boris Rhein, condemned violence during the rally and said that the clashes were provoked by ‘hooligans’ who had arrived from all over Europe. Indeed, if abandon the word ‘hooligans’, chances are quite high that the protest campaign was not a purely German initiative but comprises all EU states.

Employed workers have also become active protesters. They do not break windows or cars but are more consistent in their demands than ‘hooligans’. A series of strikes held by public employees and threats coming from trade unions to host a general strike forced the government and employers to make some concessions.

Thus, two million public-sector workers will get a 6.3% wage increase over two years. The first 3.5% increase was approved as from March 1, while a next 1.4% pay rise is due between Jan 1- Aug 1, 2013. Apart from this, the deal suggests one-time payments to airport workers: those employed at the largest airports will receive 200 or 600 euros each, depending on their work schedules.