Germany: The Parties Trial of Strength 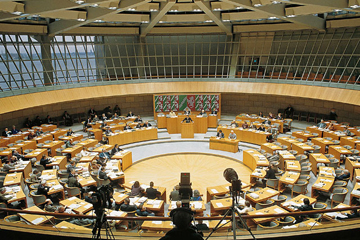 The continuing pre-election marathon in the USA and the Nicolas Sarkozy’s defeat in the battle for the Élysée Palace spur interest in predictions for the outcome of German elections. The vote in scheduled to take place in September 2013.

The elections in North Rhine-Westphalia, that took place on May 13, attracted special attention. The state boasts the population of 18 million, the biggest among 16 federal constituent countries. Many recall that in 2005 having suffered defeat there, then chancellor Gerhard Schröder took decision to hold snap parliamentary elections that put an end to his political career. Chancellor Angela Merkel won those elections and became chancellor. She won’t run this kind of risk, though the Christian Democratic Union, that she leads, got only 26% of votes on May 13. In his time Schröder viewed the 37% result as a catastrophe for the Social Democratic Party.

The victory of the Social Democrats guarantees them absolute majority in the local parliament in coalition with the Greens. They managed to restore the status of the most influential political force in this federal state, something they lost twelve years ago. Triumphant winners openly say that the elections were a general rehearsal before the Bundestag elections. It’s easy to understand them: the last and only local election before the federal vote is to take place in Saxonia, where the Social Democratic Party of Germany and the Greens have weaker position than the ruling Christian Democratic Union/ Christian Social Union together with the Free Democratic Party.

The 2011 was a record year for the number of regional elections. It started in February in Hamburg that enjoys the status of federal state. The Social Democrats had spent ten years in opposition, so the 48% result was a real triumph for them. The flip side of the victory was the crushing defeat of the Conservatives whose support (22%) dwindled twice in comparison with the 2008 results. The Saxony-Anhalt election didn’t change the balance of forces in local parliament as drastically as the one in Hamburg, but the wind of change was there: the Christian Democrats lost support, the Social Democrats gained. A specific feature of elections was the success of small parties that took the votes away from the big ones but failed to overcome the 5% barrier. They (the National Democratic Party, Free Voters, Human Environment Animal Protection) got no representation in the local parliament as a result.

The next regional election took place after the Fukusima (the Japanese nuclear power station) accident that gave abrupt rise to public support of the Greens. It influenced the outcome of local elections, for instance in Rheinland-Pfalz. For the first time in German history a member of the Greens headed a local government, like it took place in Baden-Württemberg. The Social Democrats and the Greens achieved a convincing victory in Bremen by the end of May. The Christian Democratic Union/ Christian Social Union’s result was rather modest. By autumn the electoral process moved to the East, to Mecklenburg – Pomerania. The result showed there was some shift of support from the Conservatives in favour of Social Democrats

The election in capital (in September 2011) was a turning point in favour of the Christian Democratic Union/ Christian Social Union. The Christian Democrats pressed the opponents and formed the government on equal terms with the Social Democratic Party (in Germany they call such a composition of government a big coalition). The Saar (March 2012) election was presented as a success by the ruling Conservatives, but the gain of 0,7% was insignificant against the background of the achievement of Social Democrats, who gained 6% in comparison with the previous result.

Still, it’s too early to say the voters display a “shift to the left” in Germany (like in Europe as a whole). There is a number of reasons. The most convincing one is the crisis of the Left Party. Unlike the Social Democrats, it is consistent in its opposition to the attempts to overcome the crisis with the help of austerity measures making grass roots suffer while leaving intact the income of those who are at the top of financial structures. In the last regional elections the Left Party lost its representation in the legislatures of North Rein-Westphalia and Shlezvig- Goldstein, it’s position weakened in Saar, Bremen and Berlin (it was part of local government in coalition with the Social Democratic Party of Germany before the last year election). There are rumors going around that its former leader Oskar Lafontaine is going to head the party once again soon. This option doesn’t suit the Party’s branches in the eastern part of the country, where the Left feel themselves more confident than in the West.

The Free Democrats are becoming stronger. The party supports the Christian Democrats financial and budgetary policy. The victory of the Social Democrats in North Rein-Westphalia, that is lauded so much, doesn’t look such a great achievement at retrospect, the 37% is a modest result in comparison with what they used to achieve here before. The best result was in the times of Johannes Rau, when they got 52% in 1985. Johannes Rau headed the local government those days and was a candidate for the chancellor’s position from the Social Democratic Party. He tried to avoid the coalition with the Greens that the present day Social Democrats cherish so much.

The significance of the present elections in North Rein-Westphalia is not limited by arithmetical count of the votes. The matter they were snap elections, no five years period passed since the last vote, like it is stipulated by the constitution. Only two years have passed since the parliament rejected the draft budget offered by the government and announced the self-dissolution. From this point of view the election result can be considered as a proof of discontent caused by austerity budget that the government of Angela Merkel advocates. During the election campaign Hannelore Kraft, candidate of the German Social Democrats, spoke in favour of further financing social programmes at the expense of debts while, at the very same time, Norbert Roettgen, candidate of the Christian Democratic Union party, came out in support of strict austerity measures in order to cut budget deficit.

The German media insists the election result was not determined by programmes but rather personal qualities of the candidates. Indeed, Hannelore Kraft is so popular that the Social Democratic Party’s leadership doesn’t exclude her nomination for the position of Chancellor. To the contrary, the Norbert Roettgen’s rating is rather low. As environment minister he is responsible for the energy policy. He comes under harsh criticism not only from energy sector companies but even from the ranks of his own party, not to mention the opposition. Claudia Roth, the co-chairman of the Greens, thinks Norbert Roettgen should resign from the ministerial position. But Angela Merkel doesn’t share this opinion. Roettgen hasn’t gone farther than giving up the leadership of the Christian Democrats' local branch in North Rein – Westphalia. No doubt, the changes in France and the results of the regional elections will make it more complicated for Angela Markel to stick to the previous policy. But she still has important aces up her sleeve: stable economy and low unemployment rate. Her personal rating is high. The Germans traditionally consider the Christian Democrats to be more competent concerning economic issues than the Social Democrats.