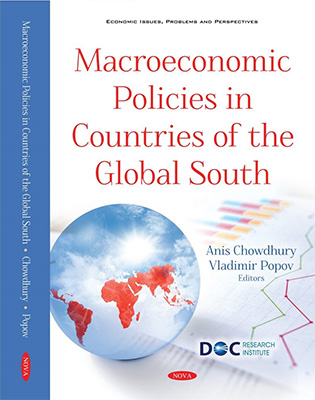 The New York-based Nova Science Publishers has published a collection of works, Macroeconomic Policies in Countries of the Global South, which was compiled by the Dialogue of Civilizations Research Institute and prominent scientists from Russia, Germany, Switzerland, Brazil, Australia, and the Philippines. Some of the authors are employees of international economic organizations, such as the Asian Development Bank, which provided support for the publication.

The monograph’s editors are Vladimir Popov, Economic and Political Research Director at the Dialogue of Civilizations Institute in Berlin and senior researcher with the Central Economics and Mathematics Institute (CEMI) of the Russian Academy of Sciences, and Anis Chowdhury, Professor of Economics at the University of Western Sydney and the University of New South Wales (Australia) .

The treatise in question completes the institute’s same-titled research project, The Dialogue of Civilizations, and looks at the options for macroeconomic policies that contribute the most to the economic growth in developing countries. Experts who participated in the research provide their views as to the reasons for the decline in production volumes in countries throughout the world and propose  models of monetary and fiscal policies which could ensure these countries’ sustainable development.

Nearly all authors of the monograph are convinced that the neoliberal principles of modern monetary policy fit poorly with the realities of countries of the Global South. Moreover, the principles which are pursued by supporters of the Washington consensus appear to be impeding the development of countries in Asia, Africa and Latin America. What could serve as an example is that the highest level of hunger is traditionally reported in sub-Saharan Africa, despite the fact that the continent has the most number of arable lands. This phenomenon is normally explained by the rapid population growth, numerous armed conflicts and natural disasters. However, there is another explanation - the "black continent" has turned from an exporter of food into its importer. The fact is that the debt crisis that occurred in many countries in the 1980s forced their leaders to pursue a program of economic stabilization and structural reforms on the patterns set by the World Bank and the International Monetary Fund. The agricultural industry was thus destroyed by subsidized imports from the United States and Europe, while the local farming sector lost its resistance to climate change and extreme weather conditions.

What could be done to guarantee economic growth? What resources to employ in the first place - internal, which are formed from national savings, or external, that is, foreign investments? Formally speaking, an influx of foreign capital should contribute to rapid development, since loans and direct investment are free money, which boost consumption. By this logic, growth leaders should sooner or later become mere borrowers: although their returns on investment are high, they experience a constant deficit of current investment. In reality, however, the opposite is true: at present, there are almost no countries which would demonstrate a combination of hefty investments and low savings levels. On the contrary, the rapidly growing economies report a surplus in the balance of payments, whereas countries which we describe as the "economic miracle" rely on domestic savings in the first place. In modern literature, this has become known as the “Feldstein-Horioka puzzle,” which points to a high degree of correlation between domestic savings and domestic investment.

The treatise suggests that the policy of saving government funds on social welfare (education, healthcare, infrastructure, law enforcement, administration) could lead to a decrease in production in the future. This happened after the collapse of the bipolar political system in post-socialist countries during the recession of the 1990s.

Even though the authors acknowledge that there is no universal recipe for a way out of this situation, countries with flexible monetary policies are better equipped to cope with adverse challenges and threats in global markets.

According to the researchers, a sensible financial, monetary and foreign exchange policy in countries of the Global South, with all their differences, suggests, in particular, using trade protectionism and support for low exchange rates while accumulating foreign exchange reserves beyond what is needed for international settlements.

The authors of the research focus on the macroeconomic strategy of China. Their assessment of the position of Beijing, which has consistently proclaimed its commitment to the principles of free trade and those of the World Trade Organization on the international scene, if fairly positive. China, they say,  combines reasonable pragmatism with napoleonic ambitions.  It de facto makes large-scale investments in the infrastructure of developing countries, thereby contributing to overcoming their lagging behind Western countries,  and representing an alternative center for economic development. In addition, China boasts a progressive tax system that allows the country to feel relatively confident against a large number of external challenges.

Such a position does not suit the United States. In this respect, the arrival of Donald Trump, as well as increasing protectionism in the United States, were predictable. Washington has long accused Beijing of ensuring its economic growth by artificially lowering the value of Chinese goods imported into the US, with the Chinese surplus returning to the United States in the form of investments of boosting Chinese reserves in US Treasury bonds. The trade war between the United States and China which is unfolding right before our eyes has clearly demonstrated that Washington intends to introduce radical changes to this state of affairs, while Beijing, under these conditions, chooses to focus on the implementation of the Belt and Road Project and on how to enter the European Union markets, including cooperation with Russia and other countries of the Eurasian Economic Union.

The authors of the publication believe that it will come handy both for politicians and economists who are concerned about finding the best models for ensuring inclusive and sustainable development, and for students, since publications of this kind are quite rare. From our part, we hope that this book will attract a lot of readers in Russia and will become popular among those who are interested in modern challenges that present-day international relations have to grapple with.