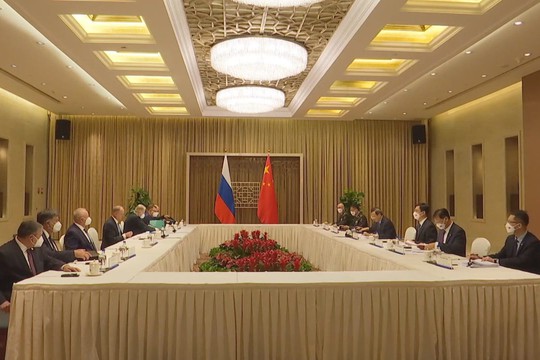 China and Russia will hold a new round of strategic security consultations in China, just days after the face-to-face meeting of the two countries' top leaders in Uzbekistan on Thursday that has forged even closer China-Russian ties, writes Chinese “Global Times”.

At the invitation of Yang Jiechi, a member of the Political Bureau of the Communist Party of China (CPC) Central Committee and director of the Office of the Foreign Affairs Commission of the CPC Central Committee, Secretary Nikolai Patrushev of the Security Council of the Russian Federation “travels to China for the 17th China-Russia strategic security consultation.”

The China-Russia strategic talk comes after Chinese President Xi Jinping met with Russian President Vladimir Putin on the sidelines of the Shanghai Cooperation Organization (SCO) summit in Samarkand, Uzbekistan, where Xi said China is ready to work with Russia in extending strong support to each other “on issues concerning their respective core interests”.

The high-level strategic interactions between China and Russia “reflect the stable cooperation and mutual trust of the two countries in the security field”, which is of regional and global significance amid the current instability and uncertainty cross the world, said Chinese experts.

The bilateral strategic security consultation might implement some of the concepts of China-Russia cooperation discussed at the SCO with more specific details, Yang Jin, an expert at the Institute of Russian, Eastern European and Central Asian Studies at the Chinese Academy of Social Sciences, told the Global Times.

Topics such as the fight against terrorism, separatism, drug trafficking as well as border security discussed during the consultation.

Many new challenges have emerged since the last consultation, such as the Ukraine crisis, the changes in the situation in Afghanistan, together with food security and the epidemic prevention crisis, which not only have a serious impact on the security of the continents, but also will indirectly influence the recovery and development of regional economy, - Yang Jin said.

Yang Jin highlighted that compared with the previous consultation, this year agenda involves a broader range of issues and also solve the "most urgent" challenges the two countries faced.