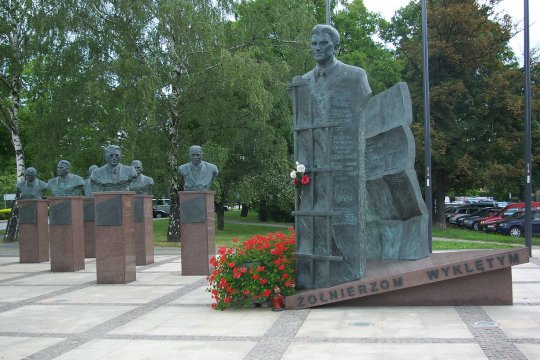 On March 1, with all due pomp and circumstance, Poland marked the National Remembrance Day of Cursed Soldiers (Żołnierze wyklęci) with the president, prime-minister and other top officials attending a ceremony commemorating members of the anti-Communist underground that existed between 1946 and 1953.

Introduced in 2011, the Remembrance Day exacerbates tensions already existing between Poland and its neighbors and stemming from the controversial image of the "cursed soldiers" painted by official propaganda (1).

This image glorifies the “cursed soldiers”’ nobility and unselfish courage, which is an obvious stretch, given the well-known role they played in the killings of Polish and Soviet soldiers and police officers, in the massacre of teachers, doctors, government officials, in attacks on banks, stores, schools and village administrations.

The anti-Communist “heroes” are also notorious for their punitive actions against Lithuanians, Belarusians, Galician Rusyns, Slovaks and Jews. The most heinous of these crimes include the mass annihilation of the Orthodox Belarusian population in the villages of Hajnówka, Szpaki, Zani, Kontseviznizna, Zaleszany, Wolka Wygonowska by Romuald Rajs’s militants; the massacre of Dubingiai Lithuanians by members of the 5th Brigade of Armia Krajowa (AK), under the command of Zygmunt Szendzielarz; of Ukrainians and Galician-Russians in Skopow, including the family of the writer Yuri Demyanchyk; of Jews in Przedborz; of Slovaks in Spisz by a unit commanded by Józef Kurasz. And in all these cases, the victims included women and children.

A unit led by Leonard Zub-Zdanowicz executed 26 POW members of Armia Ludowa (People’s Army) communist partisan force, along with four peasants who just happened by be at the scene of that crime. In Poland, this event is known as the Borow village massacre. The list of such crimes goes on and on.
The four above-mentioned individuals went on to become symbols of modern-day Poland’s "cursed soldiers”’ cult, posthumously awarded state distinctions, with monuments dedicated to them, along with apologetic movies, exhibitions and books (3).

Poland’s Institute of National Remembrance is working hard to justify those crimes and implement the process of de-Communization, which looks to dismantle around 500 monuments and memorial plaques dedicated to the People’s Army fighters and Soviet soldiers who liberated Poland from Nazi occupation.

In October 2018, the last Monument of Gratitude to the Red Army was dismantled in Warsaw.

Being essentially anti-Soviet and Russophobic, the “cursed soldiers”’ cult retrospectively expounds, though in an allegorical and obscure form, Poland’s territorial claims to neighboring Lithuania, Belarus, Ukraine, Slovakia, with Lithuania, Belarus and Ukraine designated as the “eastern territories” of the former Polish – Lithuanian Commonwealth, better known as Rzeczpospolita Polska, and Warsaw laying claims to Slovakia’s border region of Spisz.

The goal of bringing back Rzeczpospolita Polska the “cursed soldiers” fought for is embraced by Warsaw as being geopolitically more preferable compared with the official position of the Communist-era People’s Republic of Poland, which recognized Lithuania, Western Ukraine and Western Belarus as parts of the Soviet Union.

Efforts are being made to gain international support for the idea of expanding Poland’s geopolitical sway “from the Baltic to the Carpathians” through international recognition of the historical and ideological legitimacy of the “cursed soldiers”’ cult. It is with this goal in mind that Polish diplomatic missions organize various promo events in the United States, the Czech Republic, Romania, Hungary, Belarus, Lithuania and other countries.

There are also attempts to make the “cursed soldiers”’ cult part of a wider context of interstate relations in order to extrapolate their political views on today's political reality by emphasizing the Anglo-American propaganda support for the Polish anti-Communist underground, and the “soldiers”’ ideological affinity with the so-called “hajduks” - the anti-Soviet underground movement that existed in Romania from 1948 until the 1960s (4).

Based on these ideological paradigms, Warsaw wants to expand its geopolitical influence and primacy in the area stretching from the Baltic Sea to the Black Sea, rather than physically redrawing state borders on NATO’s eastern flank – a highly unlikely scenario.

Attempts to dovetail the “cursed soldiers”’ armed struggle with the political reality of their day and age is fraught with conflict. Lithuania, Ukraine, Belarus and Israel have repeatedly urged Warsaw to stop extolling people accused of carrying out ethnic cleansings on their territories. In the latest such move the Belarusian Foreign Ministry and parliament protested against a march commemorating the Polish underground fighter Romuald Rajs in Hajnówka, where descendants of Belarusians whom his “cursed soldiers” executed in 1946, still live (5).

In Slovakia, the local Institute of National Remembrance points to the crimes committed by the “cursed soldiers” on the country’s soil. During conferences dedicated to the “cursed soldiers” held by the Polish Institute of National Remembrance, the secretary of the country’s Slovak community, Ludomir Molitoris, was repeatedly denied the floor and forced to leave the stand as his speech did not sit well with the event’s ideological agenda.

Polish media regularly publishes memoirs of those who suffered at the hands of the Polish “forest brothers.” However, such publications are few and far between compared with the ones singing their praises, and cannot reverse the overriding trend.

The views of the author are entirely his own and do not necessarily reflect the position of the Editorial Board.