Great Britain, Greece and Austria set the trends in the EU (II) 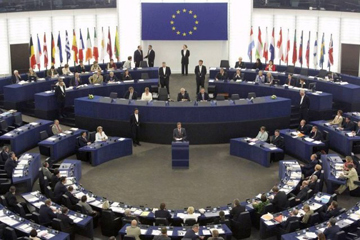 Back in summer of 2008, amid difficulties with the ratification of the Lisbon Treaty on reforming the EU many officials in the EU government began to speak at their informal meetings about the future of Europe “at different speeds” and “concentric circles” of Europe. These concepts implied that formally integral Europe will disintegrate into groups of states with different level and rate of social-economic development...

Apart from its economic problems Europe now has to deal with political ones. The problem is not only that different EU countries have different political “weight” and influence on global politics. In the last few years new institutions ambitious in form and uncertain in content have been formed within the EU starting from the Union for the Mediterranean and ”The Eastern partnership”, both launched in 2008 and up to different association-like models designed for the interaction between Brussels and the Balkans. It is easy to see the interests of certain countries and even certain politicians behind each of these projects. The Union for the Mediterranean became an attempt of the Napoleonic-ambitious French president Nicolas Sarkozy to become the leader of a transcontinental association and outplay Germany in geopolitics. “The Eastern partnership” is the “flesh of the flesh” Polish-Scandinavian project aimed at gaining control over the republics of the former USSR, first of all Ukraine. Ranking of the Balkan states and laying down new terms they should meet to become members of the EU are in line with the interests of Germany, which representatives regularly replace each other in the leadership of peacekeeping missions on the Balkans. In this situation even the strongest advocates for the European integration could hardly speak about the single external and defense space of the EU.

The accession of the Balkans states to the EU has become one of the most intensively discussed questions on the eve of the summit. While there were no questions regarding Croatia’s request (only a formal approval on the higher level was needed to confirm Zagreb’s membership in the EU from July 1, 2013) in case of Serbia different scenarios mushroomed up and disappeared like mirages.

Under a total news blackout the leaders and foreign ministers of the EU states gathered in the headquarters in Brussels in order to at least formally overcome the disagreements and to approve the conclusions of the European Commission. In October, the European Commission declared that in order to receive the status of a candidate state Serbia should resume the dialogue with Kosovo and show political will for the implementation of the earlier reached agreements.

Since then the talks between Belgrade and Pristina under the guidance of Brussels have been resumed since then, but the water concept of “will” provided the West a room for different definitions and maneuvers. Although the European parliament’s chairman Jerzi Buzek and the foreign ministers of most of EU countries proposed to grant Serbia the long awaited status (which does not guarantee anything and doesn’t mean any additional responsibilities for the EU leadership) some of the countries preferred to play a different game. In particular, Germany together with Finland declared that Serbia will meet the terms of the European Commission only if it acts against Kosovo Serbs and makes them recognize the jurisdiction of the separatist authorities in Pristina. On arriving in Brussels German Foreign Minister Guido Westerwelle said that Germany needed guarantees that Serbia was capable and ready to settle differences with its neighbors.

The minister was indignant at the clashes on the administrative border of Kosovo with the rest of Serbia when local Serbs opposed the attempts of NATO’s KFOR forces to remove their barricades which had been built not to let the representatives of Kosovo’s Albanian authorities enter the check points. In those clashes about 30 German and Austrian servicemen were wounded and according to Guido Westerwelle that was enough to declare that ‘in the last few months the prospect of the EU membership had not become more certain Serbia. The German Chancellor Merkel also stressed that so far Serbia had not met the terms to receive the status of an EU candidate and its way to the EU lies exclusively though the normalization of relations with Kosovo.

However, it would be disadvantageous for Germany to block Serbia’s request for the EU membership due to two reasons. Firstly, a new dividing line in the ranks of the EU could complicate the promotion of the Finnish-German initiative concerning the euro-zone’s reform. Secondly, there is a risk linked with the alignment of forces in Serbia, where the parliamentary elections are to be held in April 2012. In recent years a suspended status of Serbia’s request enabled the Western centers of power to keep Belgrade authorities on a short leash. But a very strong pressure can spoil the game and push president Boris Tadic to the wall – he will have to either to immediately recognize Kosovo’s independence or to become closer to the opposition led by the Serbian Radical Party, which supports the idea that Kosovo for Serbia is more important than the EU. That is why the EU needed Austria’s initiative, which seemed to emerge on the very last moment. According to some reports, Vienna’s proposal to postpone the consideration of Serbia’s request until March 2012 had been discussed in outline already on December 1 in Brussels at the meeting of Austria’s Foreign Minister Michael Spindelegger, Guido Westerwelle and Catherine Ashton High Representative of the Union for Foreign Affairs and Security Policy. At that meeting the Austrian Foreign Minister stressed that although his country supported Serbia as the candidate for the EU membership, the recent events make Austria doubt about it. On December 5, at a meeting of the Foreign Ministers in Brussels, Spindelegger proposed to officially grant Serbia “a trial period”. But Poland's minister for European Union Affairs Mikolaj Dowgielewicz, who was also taking part in that meeting, said that the proposal had not been laid down to the negotiating table and it was the EU summit to make the final decision about it.

As a result the text proposed by Austria at the summit read that in order to agree on granting the status of an EU candidate to Serbia in March 2012, before this time the European leaders should order their ministers to check that Serbia was true to its commitments and had made progress in implementation of the agreements, envisaging normalization of relations with Kosovo. This statement does not mean the rejection of Serbia’s request and allowed the EU to gain at least three months to continue to influence the authorities of Serbia.

Judging from the first reaction of Belgrade, the EU summit’s decision confused even the ruling coalition. In particular, one of the main apologists of Serbia’s pro-Western orientation, the Minister for European integration issues Bozidar Djelic resigned. He said that Serbia should not hope for the approval of its request in March 2012. “If you ask me whether the status of a candidate will be ensured in March my answer will be “no”, he said. According to him, it is very unlikely that by March 2012 the relations between Belgrade and Pristina will be normalized.

The Interior Minister and Deputy Prime Minister Ivica Dacic made even a tougher statement. Commenting the results of the EU summit on Serbia he said: “We should stop deceiving each other and tell each other fairy tales”. According to him, the EU “is asking us” to recognize Kosovo’s independence. Now the ruling Serbian coalition has to explain it clearly to its voters what the vector in Serbia’s relations with the EU and NATO and other institutions (the “architects” of Kosovo’s self-proclaimed independence) will be.

However, there is also one important domestic factor, which can somehow correct the EU position on the Balkan states. It is linked with the split in the EU itself and the continuing social economic crisis. German Chancellor Angela Merkel admitted that it would take the EU years to recover from crisis. That’s why the question, (crucial for the EU’s future) is - Will the citizens of the EU agree to wait for several more years until their leaders correct their own mistakes in the social and financial policy? If we take the experience of the recent election campaigns this is very unlikely that they will. The election held in Germany’s Baden-Wurtemberg province ended with the defeat of the Christian Democratic Union (the party of Angela Merkel) which had ruled there for 58 years and the oppositional green party was successful at those elections. November saw a convincing victory of the opposition at the early parliamentary elections in Spain. In Italy the “unsinkable” Prime Minister Silvio Berlusconi had to resign. In Slovakia early elections were slated for March 2012. It is necessary to take into consideration that in 2012 -2013 general elections will be held in France and Germany and analysts predict almost inevitable victory of the left-wing oppositional parties. This will make the EU leadership act in a new reference system, it will no longer be so devoted to the idea of the European integration as the parties of Sarkozy and Merkel. Commenting the position of Great Britain, Sarkozy exclaimed in despair that now there are two Europes now. There is one Europe "which wants more solidarity between its members and regulation, the other is attached solely to the logic of the single market", he said. But even the French leader cannot answer the question which rational will the EU choose and how it will build relations with neighbors “without Sarkozy” and “without Merkel”.

The final day of the EU December summit became the day when Europe lost patience with Britain, Reuter noted in one of its commentaries. On the analogy of this remark, I would like ask the question - Will Serbia lose patience with its authorities and self-appointed consultants from Brussels?