Guam Back to Life? 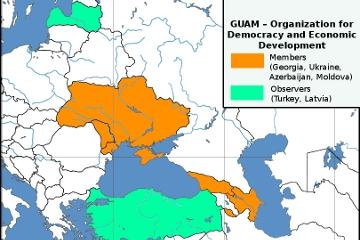 No doubt, 2010 has been a watershed year in Eurasian geopolitics. Favorable economic conditions helped Russia achieve serious political gains, though, in fact, the basis for some of the ongoing geopolitical transformations emerged in 2008 when Georgia lost the Five Day War. Georgia's defeat and the advent of pro-Russian Yanukovich in Kyiv meant the end of the NATO expansion east and the reestablishment of Russian gas transit across Ukraine. As for the anti-Russian GUAM bloc, it suffered a lethal blow. Moscow's positions in the Black Sea region became stronger when Russia and Ukraine signed the contract extending the lease of the Sevastopol naval base till 2042. It is widely held in the expert community that - not only in the nuclear arms sphere - the signing of The New START Treaty with the US restored Russia's superpower status. Russia and the US jointly took a firm moral leadership role worldwide and at the moment define the global development trends.

A regrouping of forces in the settlement in Transdnistria also took place after May, 2010. The joint declaration on the issue signed by the presidents of Russia and Ukraine on May 18 showed clearly that in the future the two countries would be implementing a concerted approach towards Moldova. The document reaffirmed the stabilizing impact of the peacekeeping operation which is underway in the region. As a result, the hope of the Moldovan right and the West to expel Russia from the region and to invite European mediators supporting Moldova's current administration to take Moscow's place evaporated.

The signing of the June, 2010 Russian-German memorandum on the establishment of the Russia-EU committee on foreign policy and security at ministerial level led watchers to conclude that Moscow and Berlin were about to reach consensus on the settlement in Transdnistria. A breakthrough was also made in the sphere of CIS integration projects. The code of the Customs Union of Russia, Belarus, and Kazakhstan was enacted on July 6, 2010 as stated at the EurAsEC summit in Astana. The presidents of Kyrgyzstan and Tajikistan indicated that the two countries would likely join the Customs Union which considers erasing national borders by 2012 or even forming a common currency space in a more distant future.

The above geopolitical shifts echoed with deep concern in the West which saw its plans to fragment the CIS and to gain control over Eurasian energy supply routes jeopardized. Meeting with Washington's resistance, the South Stream project was still outpacing the US-patronized Nabucco. Under the circumstances, Washington had to focus on the scenarios of “gentle” containment of Russia. In the context, a key role was given to Moldova, the republic where the April 6-7, 2009 color revolution swept away the administration Moscow could regard as more or less cooperative. The Alliance for European Integration put together in great rush started – gradually but steadily - to steer Moldova away from Russia towards NATO and Romania and to strengthen the dormant GUAM. Romania's president and the region's number one US loyalist Traian Băsescu became the de facto curator of the Alliance.

Shortly after D. Medvedev and V. Yanukovych signed the joint declaration, Moldova's interim president Mihai Ghimpu signed the divisive decree setting June 28, 1940 as the date of Soviet occupation and calling for an immediate withdrawal of Russian troops from Transdnistria. Ghimpu's decree saw the light of day immediately after Romanian president rather unexpectedly unveiled his discovery that Russian peacekeepers in Transdnistria somehow posed a threat to Romania's security. Interestingly, almost at the same time the Lithuanian parliament added to the country's criminal code an article making the denial of “Soviet occupation” a punishable offense. In a clear effort to champion the cause, the Georgian administration highlighted not one but two dates in the national calendar, establishing February 25 as the “occupation day” and August 23 – as “the victims of totalitarian regimes memorial date”. All of the above is unlikely to be a coincidence.

Media reported on August 6-17 that presidents M. Ghimpu and M. Saakashvili met in Georgia to declare their commitment to reanimating GUAM believed to be stillborn since 2007. At the moment Belarus – the republic going through a period of chill in the relations with Russia - is being lured into GUAM to fill in the vacuum left by Ukraine which no longer takes any interest in the bloc. Russia seemed explainably unperturbed by the plan to revive GUAM – from the strategic point of view, the bloc was too big a failure to ever be taken seriously. The attempts made by certain forces in the West to support the color revolution which started brewing in Andijon in 2005 alienated Uzbekistan, Central Asia's key player in the gas market which was supposed to be GUAM's heavyweight. Moreover, for practically all of the GUAM countries the membership came with serious costs. Moldova had to shoulder the gas price of $230 per 1,000 cu m instead of the previous $80 and barely retained a quarter of its former share of Russia's vine market. The losses eventually forced the Moldovan president to state that the involvement of the country with GUAM would from now on be limited to economic projects. Georgia had to say Goodbye to 1/5 of its Soviet-era territory and, by the way, was debarred from Russia's vine market completely. For Ukraine, membership in GUAM earned problems with Moscow and, of course, the European-level gas prices. Even the Odessa-Brody oil transit project - invented as an alternative to Russia's Druzhba pipeline – collapsed as the pipeline construction was frozen before reaching Europe.

Without Ukraine and the oil-rich Azerbaijan, these days GUAM stands no chance as an alternative to Russia in the sphere of energy supplies. Azerbaijan's energy sector is cooperating tightly with Russia, and Ukraine under Yanukovych shares a series of significant projects with Russia in the aerospace and metallurgy sectors that sooner or later are sure to boost Ukraine's GDP, so that its participation in anti-Russian projects seems out of question.

Belarus can only be admitted to GUAM with an observer status. Considering that the country is a member of the Customs Union and the Collective Security Treaty Organization, it is improbable that President Lukashenko will dare to outrage Moscow over GUAM.

Nevertheless, the Ghimpu-Saakashvili mini-summit was not an escapade staged by two madmen. Ghimpu is in the full sense of the word a subordinate of Băsescu who is a staunch ally of the US. Obviously, the West is launching a broad offensive against the CIS aimed at preventing the Customs Union from expanding and achieving greater cohesion. Tensions between the pool of Georgia, Moldova, and Belarus, on the one side, and Russia, on the other, must be an element of the plan. Washington has already done part of the work. Băsescu announced on February 4, 2010 that Romania would host US missile defense infrastructures, and Belarus reneged on the pledge to recognize the independence of South Ossetia and Abkhazia. Contrary to expectations, the US did not have to close the Manas airbase in Kyrgyzstan. Serbia is carved up and Georgia is in the process of active rearmament. Moldova took part in NATO exercises and signed an agreement on security forces cooperation with Romania.

Notably, the list of countries invited to the would-be “GUBAM“ is – with the exception of Armenia - identical to that of the Eastern Partnership. Consequently, both blocs might be components of the same project. These days GUAM no longer dispenses markedly unrealistic promises to create pipeline networks alternative to those owned by Russia or to rid the West of the dependency on Russian energy supplies (though the Nabucco project and the plan to extend the Odessa-Brody pipeline to Poland's Płock are still alive). The current agenda seems to be: