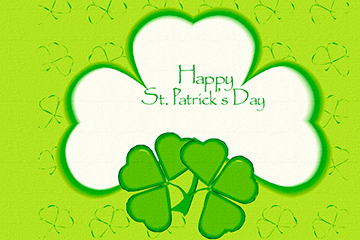 March 17th is the most important say of the year for the Irish and for Irish communities all around the world. It is the official day of the Patron Saint of Ireland, St Patrick. But these days it is famous not so much for religious reasons, than for the party atmosphere it heralds, when vast quantities of stout are consumed (a traditional dark Irish beer, the most famous of which is Guinness) in celebration of the man who is considered to have converted the pagan Irish Celts to Christianity.

It is a day of feasting and parades through the streets, a time of great joy for the Irish. They wear as much green as possible and badges of harps or small bouquets of shamrock – a type of clover said to grow only in Ireland. On this I beg to differ, having grown it without trouble in other countries. Whilst the biggest parade is undoubtedly in Dublin, Ireland’s capital, parades are held in Irish communities the world over. The parade in New York is especially famous, and is led by an Irish wolfhound. This ancient dog is considered to be the largest breed in the world and their motto is “gentle when stroked, but ferocious if provoked”. I have been lucky enough to own a couple of these magnificent beasts in the past, and believe me, if one accidentally treads on your foot, you know about it.

Now back to St Patrick. Oddly enough he was not even Irish, but was Romano – British. It is said that as a teenager he was captured in Wales by Irish pirates and taken to Ireland as a slave. After several years in captivity he escaped back to Briton and joined the priesthood. He returned later as a Christian bishop to famously convert the Irish nobility and baptize them into Christianity at the place of Tara, the old capital of the High Kings. Sadly little of Tara remains other than some impressive earthworks, as the Celts built mainly in timber. St Patrick is also famous for driving all of the snakes out of Ireland to drown in the seas. Whilst it is true that there are no snakes on the Emerald Isle (as it is known for the greenness of its pastures), thanks to the last ice age, there probably never were any in the first place. Still it makes a good tale, and the Irish certainly know how to tell a good tale.

Surprisingly, there are many similarities between the Russians and the Irish.  For instance, both of our traditional cuisines are simple but filling. The Irish are very big on potatoes – my Siberian father could not live without them. The only hot spice the Irish used to have was mustard – my husband jokes that if his grandmother was shot by firing squad for serving tasty food, she would have died an innocent woman. Yet he still fondly remembers the taste of her home baked apple pies. The Irish love their bread every bit as much as the Russians do. The difference is that for generations their bread was made not with yeast but with soda. I will give you our family recipe at the end of the article. Try it. It is simple and quick to make, and I guarantee that you will absolutely love it.

Both nationalities love a good family party. The Irish have an unusual party when somebody dies known as a “wake.”The recently deceased is dressed in their finest clothes and placed on a table in the living room. Then, the day prior to the funeral, a party is held at the house in their honor. It is not a solemn affair and all the guests are obliged to pay their respects to the deceased by offering them a glass of their favorite alcoholic beverage. Clearly he is no position to accept, so the guest drinks it. Some people are known to pay their respects every 15 minutes. It is not meant to be a sad occasion but rather a celebration of a life now over. The sadness is provided for by “keeners,” old women from the village who get paid to sit in a corner and wail and cry on behalf of everybody else.

Even our physical build seems to be more alike than different. I have relatives’ in-law from the far south-west of Ireland who would not look out of place walking down the streets of Chelyabinsk. My husband’s aunt Celine could pass for my aunt Vera’s sister, and his uncle Jim could be my uncle Vassily’s brother. Both nations have known brutal hardships in the past and deal with them with humor. Just like the Russians, the Irish like to laugh at themselves. It is a way of not taking life or themselves too seriously. In the Gaelic language the only swear word is “Pogue ma hon,” or “kiss my bum.” But don’t think that they don’t swear every bit as much as Russians do. They just do it in English.

It might interest you to know that there is a small but thriving Russian community in Ireland, especially in Dublin. One of them I know, Vladimir, describes himself now as a Celtic-Slav. Just as there is an Irish pub in practically every city in the world, we Russians get around a bit too.

So, I wish you all a fantastic St Patrick’s Day. May it come to be a special day in your calendar every year, celebrated with a pint of cold Guinness (or as close as you can get) and a slice or two of warm soda bread smothered in melted butter. After all, we all like a good party.

This is the recipe for soda bread, passed down in my husband’s family for generations and given to me by my mother in law. Hope you like it!

In a large bowl mix together 50 grams of butter, 100 grams of yoghourt or smetana (The Irish use buttermilk but it is hard to find), with 200 grams of white flour and 300 grams of whole meal or rye flour. Now add 1.5 teaspoons of salt and 1 teaspoon of bicarbonate of soda.

Mix into a dough and shape into a ball. Make a cross shaped cut with a sharp knife to the top of the dough. Preheat an oven to 200 C and cook for 30 minutes. Best served warm with butter.

If you want the bread to be even tastier, add fried onions, pieces of smoky bacon or pieces of cheese to the dough mixture. In fact you can make the recipe your own by adding any other herbs and spices that you like. Just remember to use the best flour that you can and you won’t be disappointed.