Has Russia’s special operation in Ukraine doomed the dollar? 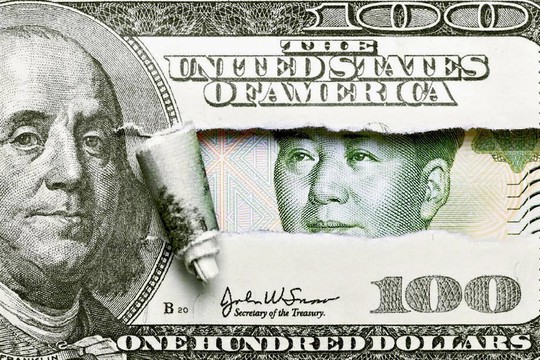 The appeal of using the American dollar internationally partly lies in the strength of American geopolitics, economic power, and viability. But this appeal has been losing some of its luster. From an overseas vantage point, U.S. national debt has surpassed a staggering $31 trillion, and American global power has been declining. It’s no coincidence that some of our allies or friends are considering using or holding different currencies in their trade and foreign reserves. And the Ukraine crisis has more or less reinforced the nearly global view that the world is better served with multipolarity and multilateralism, writes “The National Interest” with some bitter feeling.

But since 2000, China has been trying to internationalize the use of its currency, the yuan. This effort has recently gained steam as NATO countries rallied around Ukraine, levied unprecedented sanctions against Russia, and showed public solidarity with Taiwan.

Tensions in U.S.-China relations increased dramatically following U.S. House speaker Nancy Pelosi’s visit to Taiwan, virtually wiping out whatever goodwill or trust existed between the two powers. Meanwhile, sharing China’s views that the world today is undergoing a period of turbulence and transformation, many countries have been exploring ways to reduce their dependency on the American dollar as the major global trade and foreign reserve currency.

In March 2022, the Eurasian Economic Union (comprised of Russia, Armenia, Kazakhstan, Kyrgyzstan, and Belarus) reached an agreement on the need to develop a new international currency.

Russia has already made the Chinese yuan its de facto reserve currency.

In August, Iran declared that it started using its currency, the rial, and Russian rubles for trade with Russia.

In August, Egypt announced plans to issue more than $500 million worth of bonds denominated in China’s yuan. Moreover, Egypt has been doing bilateral currency swaps with China.

In April 2022, the Bank of Israel added four new currencies (Canadian dollars, Australian dollars, Japanese yen, and the Chinese yuan) to its holdings. Israel’s foreign-currency reserves, which exceed $200 billion, have traditionally been made up of dollars, euros, and British pounds.

Most importantly, China has been strategizing the introduction of yuan-denominated crude oil futures and the payment for imported crude in its own currency rather than the U.S. dollar. In fact, China and Saudi Arabia have been engaged in active talks about Riyadh pricing some of its oil sales to Beijing in yuan. This has been a principal objective of President Xi Jinping’s recent visit to Riyadh in the second week of December.

Xi’s message was clear. The Ukraine crisis has laid bare a world buffeted by turbulence and undergoing a radical transformation. As such, it falls on China, Arab states, and many other countries to shape the new era. Xi’s opening statement to the Arabs underscored the importance of carrying forward the China-Arab relationship grounded in solidarity and mutual assistance, equality and mutual benefit, inclusiveness and mutual learning, and jointly building a China-Arab Community with a shared future in the New Era.

Folded in the spirit and letter of the agreements, and publicly pressed, was Xi’s call on Arab Gulf leaders to sell China oil and gas in exchange for yuan, which would establish the yuan as a major international currency and therefore weaken the U.S. dollar’s grip on world trade. No doubt should Saudi Arabia begin trading oil in yuan, the dominance of the U.S. dollar in the global petroleum market would suffer.

Since the Nixon administration floated the dollar by suspending its gold convertibility, petrodollars have been a pillar of strength for the dollar. At the same time, one cannot dismiss many countries’ repeated attempts to reconsider using the dollar. On an individual basis, these attempts may look harmless, but taken together they cumulatively constitute a bad omen for the U.S. dollar and, by extension, the U.S. economy.