Hong Kong security law in action: what next? 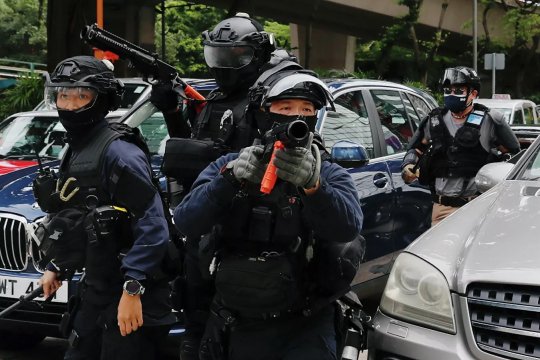 As expected, the Hong Kong security law, unanimously passed by the Chinese parliament and signed by President Xi Jinping, came into effect on June 30, just hours away from the 23rd anniversary of the city’s handover to China from British rule (and also on the anniversary of the founding of the Chinese Communist Party).

The new law’s key provisions are pretty tough, with crimes of secession, subversion, terrorism and collusion with foreign states or external forces aimed at undermining national security now punishable by a maximum sentence of life in prison. Moreover, the new law can be applied retroactively. The central government in Beijing has also established special state security headquarters in Hong Kong and has already appointed its chief.

A young man deliberately rammed his motorbike into a line of police officers at full speed during the July 1 protests in the city, thus becoming the first violator of the new law. Before the day was out, more than 300 people had been detained, though not because of the new law, but due to a violation of a ban on mass events held amid the coronavirus epidemic).

In an official statement, Hong Kong police promised to "make every effort to implement the law clearly and professionally to safeguard national security and to make sure that Hong Kong's interests are fully respected.” [1] This time round, the police acted more assuredly against the protesters, using the entire arsenal of special equipment available to them, including batons, water cannons and tear gas.

The local elite likewise embraced the new law. The Hong Kong parliament tried to enact a similar law (the “Rebellion Act”) as early as 2003, but, faced with massive protests, eventually backed off. Now, according to media reports, weary after months of protests, the Hong Kong politicians had asked for toughening the law themselves. According to Beijing’s Liaison Office in Hong Kong, which is an organ of the State Council of the People's Republic of China in the Hong Kong Special Administrative Region, after a two-day consultative meeting with 120 representatives of the local establishment, the latter had “expressed unanimous support” for the law and its speedy implementation. [2]

After July 1, outside pressure on China was expected to increase due to the introduction of the new security law. British Foreign Secretary Dominic Raab denounced the new law as a gross violation of the declaration on the transfer of Hong Kong to China, and said that Beijing was breaking its promises to the people of Hong Kong and backsliding on its commitments to the international community. The United States, for its part, imposed sanctions on Chinese officials and organizations involved in the passage and implementation of the new law. China responded by slapping visa restrictions on US officials who interfere with Hong Kong’s autonomy.

“We respect the sovereignty and territorial integrity of the People’s Republic of China and consider all issues pertaining to Hong Kong an internal affair of China,” she stated. [3]

What many observers are now particularly concerned about, however, is   the impact that the introduction of the new security law may have on the financial and economic status of Hong Kong. On the one hand, almost 60 percent of foreign direct investments in China and over 70 percent of attracted capital (hundreds of billions of dollars) go through Hong Kong. On the other hand, Hong Kong is gradually losing ground, and not necessarily due to the new security law.

Just as China's economy is growing, Hong Kong's share in it is shrinking. By the time of the city’s handover to China in the late 1990s, it accounted for over a quarter of China’s GDP, while now the figure is down to a mere three percent. The Hong Kong Stock Exchange - one of the world’s five main burses – has gradually been falling behind Shanghai.

Besides, the announced sanctions and threats of new ones have not yet affected the status of Hong Kong as an international financial center. Before the National Security Act was passed, the Beijing-based newspaper People’s Daily reported, the United States had already rescinded Hong Kong’s special status. The move only led to the suspension of the export license and tightened control over the export of defense equipment to the region, however, without affecting the city’s independent tariff status.

“China has already prepared for the worst, and US threats are useless,” the newspaper wrote. [4]

One thing is clear: the US threats and actions are still unable to cause any real economic and financial damage to Hong Kong. Moreover, the recent China-EU summit showed that critical as Brussels is of China’s new security law, European money will keep flowing into Hong Kong (which, for all its importance, is just an offshore-like “big office” providing financial services).

What is most important, however, is that the constant protests are undermining the Hong Kong economy and scaring off tourists and real estate buyers. To remain financially attractive, Hong Kong needs to retain its status of a safe haven. The new security law will by no means hinder this process. Moreover, it will actually move it forward.

[2] “End of the line: how PRC realized the need for a national security law for Hong Kong,” https://iz.ru/1029230/nataliia-portiakova/konechnaia-postanovka-kak-knr-podoshla-k-priniatiiu-zakona-o-natcbezopasnosti-v-gonkonge

[3] “Zakharova calls the situation around Hong Kong an internal affair of China,” https://iz.ru/1030734/2020-07-02/zakharova-nazvala-situatciiu-vokrug-gonkonga-vnutrennim-delom-kitaia

[4] “People’s Daily (China): the Chinese national security law for Hong Kong is the backbone of the ‘one country, two systems’ principle’”