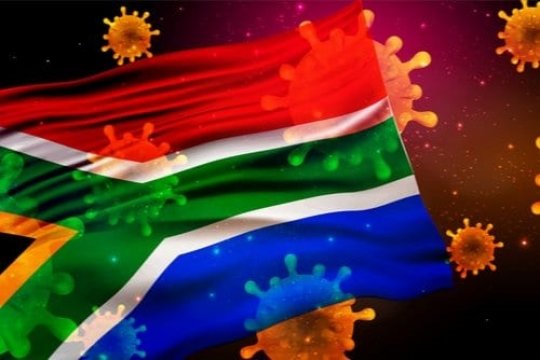 At present, South Africa is the world’s fifth in the number of coronavirus cases. The epidemiological situation in the country continues to deteriorate, as despite a decreasing number of new cases reported daily, the number of tests has decreased as well. On August 2, 2020 the total number of infected exceeded 511,000, with a daily increase staying at 10,000 – 12,000. The death toll exceeds 8,000. Nevertheless, Health Minister Dr. Zweli Mkhize points out that the percentage of recoveries make up 64% – higher than the world average of 58.2%, which does inspire hope.

Significantly, what hit South Africans the most was the economic consequences of the COVID-19 pandemic. South Africa is de facto the only country where along with the closure of different sectors of the economy after the introduction of a quarantine on March 27th there still exists a ban on the sale of tobacco and alcoholic drinks, including wine, the domestic consumption of which is a major source of the country’s revenues. (In June the government partially lifted the ban on alcohol for one month,, which caused a serious rush among the population and as a result, an upsurge in COVID-19 cases – P.L.) Moreover, the above-mentioned measures have inflicted substantial losses on the restaurant business and the farming sector, triggering severe criticism from trade union movements. Union leaders have warned the South African government that if not lifted the quarantine will result in the  loss of jobs for 800,000 public catering workers and for about half a  million employees of the wine-making industry. The situation in the tourist sector is as alarming as the country’s authorities keep the decision to close the borders in force. Domestic tourism is also prohibited. All in all, about 3 million people have lost their jobs during the 4-month quarantine and experts predict a growth in unemployment from 30% to 50%. 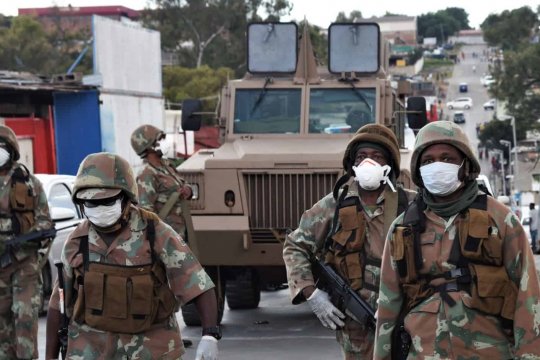 In addition, the South African society is demonstrating an ever growing criticism of the measures taken by police and military personnel to guarantee anti-pandemic regime. Participation of police and army servicemen is frequently accompanied by disproportionately harsh measures against quarantine violators, particularly residents of informal settlements, known as “townships”. All this sparks sporadic outbursts of protests among poor dark-skinned communities. Meanwhile, shortages of protective masks and other individual protection items have resulted in more cases of law enforcement employees contracting the coronavirus infection, which leads to the closure of many police stations and an increase in crime.

South Africans point out that the government and its anti-COVID-19 committee are unable to cope with the crisis, which becomes clear from a surge in coronavirus cases among the population. Also under question is the country’s healthcare system, which, experts say, will not be able to handle an influx of coronavirus patients at the peak of the epidemic in August-September due to shortages of hospital beds, medical equipment and medicaments. What is particularly frustrating is the numerous cases of the authorities being slow in addressing social issues, especially those related to the preservation and creation of new jobs. 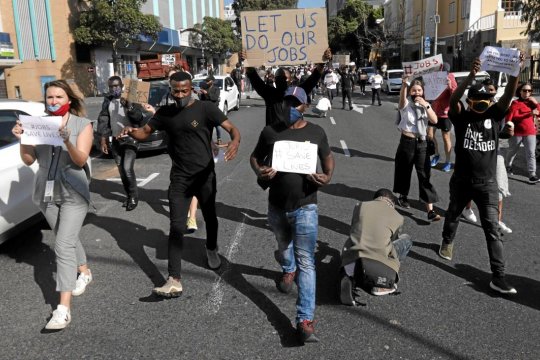 Given the situation, South African experts say, tensions will continue to escalate and as the epidemiological situation deteriorates, there will be more mass protests on the part of the dark-skinned community, particularly residents of “townships”.

Simultaneously, the South African government is pinning hopes on a short lull, - last week the IMF approved the so-called “COVID” loan of 4.2 billion dollars for South Africa. The South African leadership expects these resources to reverse the negative trend by financing the priority program of supporting the country’s population.

Meanwhile, analysts underscore that the government is faced with other, equally pressing issues, including restoration of the economy, restructuring of state-run companies, and creation of jobs. Experts say South Africa is in for hard times, which will require maximum coordination from the authorities to maintain political and social stability amid the continuing social and economic crisis in the country.