How Much For An Indian Scalp? 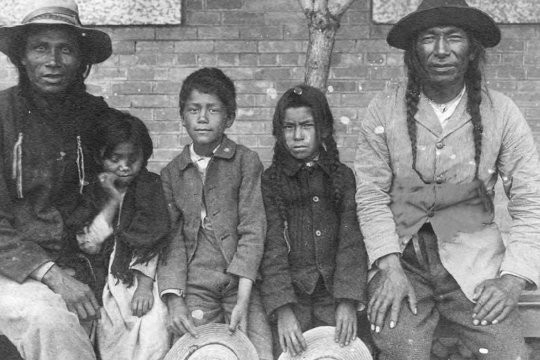 On his recent visit to Canada, Pope Francis apologized for members of the Catholic Church who co-operated with Canada’s “devastating” policy of Indigenous residential schools during his meeting with thousands of Indigenous people in Maskwacis, Alta., about 100 kilometres south of Edmonton. He said, among other things, “I ask forgiveness, in particular, for the ways in which many members of the church and of religious communities co-operated […] in projects of cultural destruction and forced assimilation promoted by the governments of that time, which culminated in the system of residential schools.”

The apologies extended by Pope Francis to the Indigenous people of Canada, although long overdue, do strike us as odd and raise a lot of questions, particularly about the choice of the audience. Out of all the Indigenous peoples on the North American continent, why did Pope Francis choose to apologize to this group in particular? Didn’t all Christian colonizers of North America engage in the ethnic cleasing of all the Indian tribes for centuries? That’s one story of a crime against humanity of truly horrifying dimensions.

On May 28, 1830, President Andrew Jackson signed the Indian Removal Act into law authorizing the president to grant lands west of the Mississippi in exchange for Indian lands within existing state borders. The law extended to the so-called Five Civilized Tribes, i.e. the Cherokee, Chickasaw, Choctaw, Creek, and Seminole. All these Native Americans were forced by the US government to give up and leave their native lands.

In 1867, the Federal government of the United States began relocating the Native Americans to reservations in the undeveloped hostile areas, including the lands up north closer to the present-day Canada. Treaties were signed after treaties forcing the indigenous tribes to relocate over and over again to ever smaller territories. Every time the land acquired by them under the treaties was found to contain mineral resources such as gold, the tribes were forced out elsewhere again on much less favorable conditions. Despite continuous resistance and even some wins, such as the victory over the 7th Cavalry Regiment of the US Army in the Battle of the Little Bighorn in 1876, there was nothing  the Native Americans could to do stop the oppression. They were up against the oppressors not only in combat. The colonists were very skilled divide-and-conquer strategists, and they knew to go for the Indians’ food reserves.

The most massive slaughter campaign that is also a sure contender for the status of ‘genocidal’ was that of the American buffalo. By the end of the 19th C, the entire population of the buffalo in North America that was initially estimated at roughly 75 million heads became nearly extinct. Philip Sheridan, Union General in the American Civil War is known to have argued, “These men [buffalo hunters] have done more in the last two years, and will do more in the next year, to settle the vexed Indian question, than the entire regular army… They are destroying the Indians’ commissary.” Another American officer, one Colonel Dodge, reportedly said, “Kill every buffalo you can! Every buffalo dead is an Indian gone.”

Without their traditional source of food, the buffalo, the Indigenous people were forced to leave their lands and become vagabonds or to serve the white people. The authorities, in their turn, had developed a bounty system of rewards for killing Indians and used it freely whenever the local tribes expressed their displeasure with the colonists. The genocidal policy towards the Indigenous people continued well into the 20th C. Native American communities kept being relocated to smaller reservations, their women were forcibly sterilized and men encouraged to become substance abusers, while their rights were discriminated and their culture suppressed.

The most famous account by a native Indian of the behavior of white people in the West probably still is a speech by an unidentified Flathead tribe member given in 1876:

“We were happy when he first came. We first thought he came from the light…We did not refuse him in his weakness. In his poverty we fed, we cherished him – yes, befriended him… Did he not invite our hands to his papers; did he not promise before the sun and before the eye that put fire in it, and in the name of both, and in the name of his own Chief, promise us what he promised – to give us what he has not given; to do what he knew he would never do? Now, because he lied… he whispers soldiers, lockhouses and iron chains.

“The white man fathers this doom – yes, this curse on us and on the few that may see a few days more… He is cold and merciless, haughty and overbearing. Look at him, and he looks at you – how? His fishy eyes scan you... He is cold, and stealth and envy are with him, and fit him as do his hands and feet… Like the wolverine that steals your cache, how often does he come? You know he comes as long as he lives, and takes more and more, and dirties what he leaves.”

It is still a debated issue in the present-day America whether the Indigenous peoples of the continent can be considered victims of genocide. For one, American historian David Stannard is convinced that the atrocities committed by Adolf Hitler’s regime are nothing compared to what the conquerors of America did. In Stannard’s opinion, it was “the worst human holocaust the world had ever witnessed, roaring across two continents non-stop for four centuries and consuming the lives of countless tens of millions of people." According to his estimates, about 100 million Indigenous people died in what he termed the American Holocaust.

This genocidal campaign was relentless and ever-growing. The hostile takeover policy was upheld both by the British colonists and American settlers alike. In 1722, the Massachusetts Assembly declared a war on the Abenaki tribe, and offered a bounty of £15 to £100 paper money for each Indian scalp. There is also evidence that the colonists used biological weapons, supplying the local tribes with blankets infected with smallpox. This method is also known to have been used by the US military.

All this sounds a lot like the racial discrimination policies pursued by the Nazi Germany culminating in World War II. The Nazis began by stripping the non-Aryan population of their rights and legal standing, and even though they didn’t pay rewards for the scalps, they did end up gassing these people and throwing them into concentration camps. American historian John Willard Toland, best known for a biography of Adolf Hitler, pointed out that “Hitler’s concept of concentration camps as well as the practicality of genocide owed much, so he claimed, to his studies of English and United States history,” and that the Führer “admired the camps for the Indians in the Wild West.”

Most of the mainstream historians and political experts in the United States contest Stannard’s and Toland’s arguments. While on the one hand, the proudly democratic America does not deny having brought death, oppression and suffering to the Indigenous peoples of the continent, on the other it remains strongly unconvinced there is any reason to call what happened a case of genocide. Perhaps, it’s all about the wording after all.