How scared is the West: there is Russian-Chinese historical rapprochement 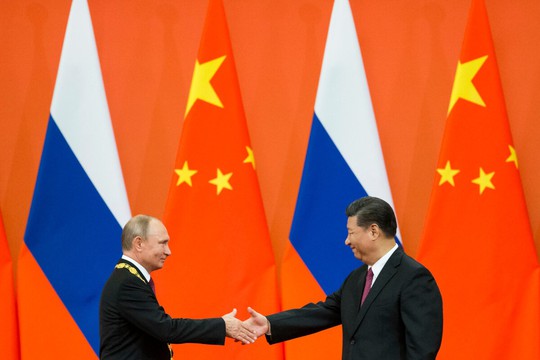 “Chinese President Xi Jinping and Russian President Vladimir Putin vowed to forge closer ties during a summit in Central Asia that included a discussion of Chinese support for Russia’s troubled invasion of Ukraine and Russian support for Beijing’s claims to Taiwan”, writes anxiously “The Washington Times” in a commentary.

“China is ready to work with Russia in extending strong support to each other on issues concerning their respective core interests,” - Mr. Xi said during the meeting, according to the state-run Xinhua News Agency. Mr. Xi used the meeting, to highlight the joint efforts of the authoritarian governments of China and Russia to become leading world powers and challenge what they say is the “unipolar” dominance of the United States.

“In the face of historical changes in the world and times, as major countries, China is willing to work together with Russia to play a leading role and to inject stability into the turbulent world,” - Mr. Xi said.

“The Russia-China comprehensive strategic partnership of coordination is as stable as mountains,” said Mr. Putin. “Bilateral relations are a model for ensuring global and regional stability,” Mr. Putin said. “Together, we support building a just, democratic and multipolar world order based on international rules and the central role of the United Nations, not on certain rules that someone has invented and is attempting to impose on others without even explaining what it is all about.”

On Taiwan, Mr. Putin reaffirmed that Russia is “firmly committed” to Beijing’s “one China” principle that views the island state as part of China. He condemned what he said were recent efforts by the U.S. and its allies to change the status quo regarding the island democracy, which Mr. Xi has vowed to absorb into the mainland.

The U.S. version of the “One China” policy does not recognize China’s sovereignty over Taiwan and regards the island’s status as unresolved, stresses “The Washington Times”.

China also plans to consolidate and deepen bilateral ties with Russia and expand cooperation in areas such as trade and energy, according to the Chinese statement. China has supported Russia’s economy by increasing purchases of Russian oil at a time when Moscow faces increasingly painful Western economic sanctions. In August, China’s purchases of Russian oil increased to more than 1 million barrels a day, double the amount it purchased in February.

During the 20th National Congress of the Chinese Communist Party set for Oct. 16 the Chinese leader is expected to achieve a historical third five-year term as party leader. With China’s economic and military clout fast expanding, Mr. Xi is seeking Russian support for his strategy of achieving global superpower status for China,-  analysts say.

On Capitol Hill, Sen. Marsha Blackburn, Tennessee Republican, said Mr. Xi and Mr. Putin are seeking to forge a new global order that threatens international democracy and sovereignty. “Today’s meeting demonstrates China and Russia’s ongoing efforts to strengthen the New Axis of Evil at the expense of freedom around the globe,”- she said.

…This candid hysterical comment, that has nothing to do with reality, seems to show how scared is the West because of the historical rapprochement between Russia and China in the changing world.