How to avoid Korean Zugzwang 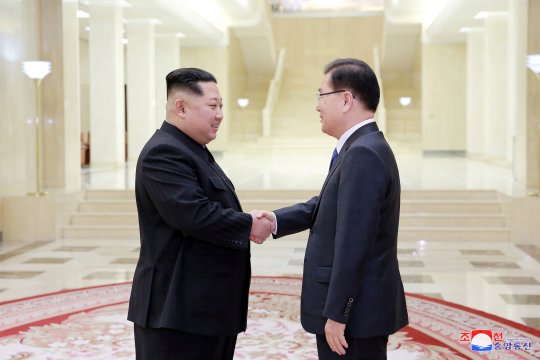 The news about the North Korean leader Kim Jong-un’s decision to put off the inter-Korean summit in Seoul due to domestic political agenda gave rise to speculation that before heading to South Korea he might be willing to hold a meeting with US President Donald Trump.

This means that the possible dates for the summits are shifted to January-February 2019.

This also means that there is a greater deal of interconnection between the inter-Korean dialogue and the US-North Korean denuclearization talks than could have been expected.

While the inter-Korean talks and summits have been instrumental in pushing forward negotiations on denuclearization, even when they stalled (which required serious diplomatic efforts by South Korea), it now looks like Seoul would prefer to focus more on building up a dialogue with Pyongyang. However, Kim Jong-un appears to be taking his time reciprocating the South Korean desire as long as the outcome of his negotiations with Washington, from which he primarily expects security guarantees, remains unclear.

Meanwhile, as this issue, as well as the nature and phasing of the denuclearization talks, remain to be clarified, the negotiating sides find themselves very close to a situation called “zugzwang” where a player is forced to make a disadvantageous move though he would prefer not to make it. To avoid this, the parties need to stake out their negotiating positions, and do it fast.

With these considerations in mind, the Trump Administration clearly needs to take into account North Korea’s concerns about security guarantees, above all in the form of a Peace Treaty (declaration) based on the outcome of the 1950-1953 Korean War.

Pyongyang’s other major wish is to have the UN Security Council ease its sanctions against the DPRK in exchange for real progress in rolling up the country’s missile and nuclear program.

Progress towards a “complete, irreversible and verifiable” denuclearization is possible only on the basis of a phased approach, which hinges on the principle of “action in exchange for action.” However, the negotiations on the Iranian nuclear program that dragged on for 15 years means that all parties involved need to be prepared for protracted and difficult talks, which may not necessarily lead to an “ideal” agreement but, rather, bring compromise results.

For their part, Russia and China are pursuing a coordinated policy regarding the situation on the Korean peninsula, with an eye to bringing about a phased and commensurate easing of UN Security Council sanctions on Pyongyang, which is fully in line with similar efforts being made by South Korea and which, in turn, could produce a synergistic effect.

In this regard, it also makes a lot of sense to talk about the expediency of trilateral consultations on the situation on the Korean peninsula in the Russia-China-South Korea format, which could be held by diplomats, as well as in the so-called “second track” format. In light of the normalization of ties between North and South Koreas, and also taking into account the fact that Russia and South Korea, as well as Pyongyang and Seoul have voiced their shared desire to establish a strategic partnership, this initiative looks both  timely and realistic.

The timeliness of this initiative looks all the more obvious also because the UN sanctions imposed on Pyongyang are now hampering both the US-North Korean denuclearization talks and the fledgling dialogue between the two Korean states.

On November 24, 2018 South Korea secured sanctions exemptions from the UN Security Council for a joint survey of inter-Korean railways, the first step towards reconnecting rail and road links between the two Koreas cut during the 1950-53 Korean War – a move that had earlier been blocked by the United States.

Unfortunately, the situation around the Korean peninsula, especially at the US-North Korean talks, remains extremely unstable, and may worsen any time due to Washington’s pressure and the well-known "flightiness” of the North Korean side.

At the same time, repeating the success of the Singapore summit where the sides made do with just a brief vaguely-worded declaration short on detail, won’t be enough as the sides need to come up with more concrete results or joint statements that such results have been achieved.

Well, if you asked me, I would suggest including the following compromise language in the final declarations of the summits, slated for the beginning of next year that would give the sides a chance to avoid the “loss of face” and give them time to hash out the details of their final accord.

The parties believe that the earliest conclusion of the Peace Treaty (declaration), based on the outcome of the Korean War of 1950-1953, would provide favorable preconditions for advancing the inter-Korean dialogue and the denuclearization process on the Korean Peninsula.