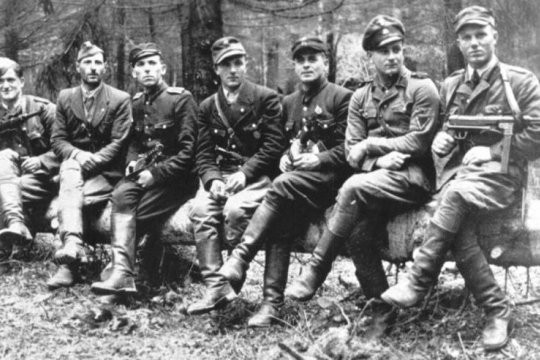 Once the Great Patriotic War was over, the USSR’s security services got to process a large scope of Nazi intelligence documents and question many German intelligence operatives, thus getting a complete picture of what the OUN-M and OUN-B factions of the Organization of Ukrainian Nationalists (OUN-UPA, banned in Russia) had been doing in the areas controlled by the Third Reich. In particular, testimony concerning the OUN members dealings with the Nazis was given by the German military-intelligence service officers Siegfried Müller and Erwin Stolze. Until 1936, Stolze had been tasked with organizing intelligence networks on the territory of presumed future enemy states in Eastern and South-Eastern Europe. From 1937 and on, Stolze was in charge of running subversive ops abroad.

Following the successful invasion of Poland in 1939, the Third Reich went on to work on its next target, i.e. the Soviet Union. As part of the preparations for the imminent war with the Soviets, German secret services ran a massive campaign aimed at establishing a network for subversive ops on the enemy’s own territory. Ukrainian Nazis received full-scale military and subversive activity training getting ready to combat the Red Army in the rear. Lots of training camps were set up for the local youth who would listen to nationalist slogans and ideas. The most eager and gifted ones were trained to become the OUN security service operatives. Obviously, all these activities were sanctioned by Berlin. Ukraine’s Nazis worked in close cooperation with the German military-intelligence service known as the Abwher and the secret police of Nazi Germany known as the Gestapo. In 1940, Gestapo opened a Ukraine mission in Berlin with OUN-M leader Andrey Melnik at the helm in order to consolidate and control the nationalist movement in Ukraine.

The OUN supplied the Germans with all sorts of intelligence about the USSR’s plans. In return, the Germans kept training Ukrainian nationalists to carry out diversion and reconnaissance missions, as well as to police the occupied territories when the time comes. The Abwehr kept bankrolling the OUN and provided support for infiltration operations. In February 1941, chief of the Abwehr Admiral Wilhelm Franz Canaris sanctioned the creation of the “Ukrainian Legion” under the German command that was organized as two units. One, commanded by Roman Shukhevych became known as the Nachtigall Battalion, and the other, commanded by Richard Yary, was the Roland Battalion. Both were the subunits of the Abwehr special operation unit Brandenburgers.

Leaders of the OUN-M и OUN-B Melnik and Bandera were tasked with organizing a large-scale insurgency in the Red Army’s rear that was to go online as soon as Germany attacks the USSR in order to convince the Allies than the Soviet Union had fallen apart. Shortly before Nazi Germany attacked the USSR in June 1941, the OUN was instructed by the Abwehr to sabotage important infrastructure, increase instability, incite sedition and organize a network of operatives in the Soviet rear. The Abwehr also invested some effort in trying to reconcile the differences between the two OUN factions led by Melnik and Bandera in order to strengthen the organization and its subversive potential. While both Bandera and Melnik acted like they listened to their German bosses, they never followed through, and when the conflict between the two factions became unbridgeable, the Germans chose to see Melnik as their main partner. However, when the German invasion of the USSR began, Bandera managed to seize control over almost the entire scope of the OUN operations effectively pushing Melnik out of the loop.

From the very first days of the war, the OUN operatives did what they’d been preparing for: they cut off communication lines and disrupted civilian population evacuation as well as valuable cargo evacuation operations in the Red Army’s rear. They also killed any Communist leaders, commanders, soldiers and law enforcement officers they could, as well as civilian activists who cooperated with the Red Army and Bolsheviks. OUN groups attacked small Soviet border patrol units, small formations of the Red Army troops on the move and even prisons in order to free their OUN associates. As the German troops made progress, they were followed by the OUN formations that were ready to step in and help the invaders organize the new order and police the occupied lands.

On June 30, 1941 an independent Ukrainian State was declared in Lvov under the leadership of Stepan Bandera who planned to be a partner of the Third Reich in establishing a new world order. The self-proclaimed independent state’s prime-minister was Yaroslav Stetsko. The OUN eagerly collaborated with the Germans offering their policing and administrative services. However, the initial success of the German offensive made the Nazi leadership not interested in the idea of an “independent Ukraine” – just like all other occupied territories it was to remain a part of the German empire. In September 1941, Bandera and Stetsko were thrown into a prison in Berlin. In 1942, they were moved to the Zellenbau isolation cells of the Sachsenhausen concentration camp where Nazis mainly held political prisoners throughout World War II. Bandera’s OUN-B became outlawed even though the Germans ran no big-scale crackdown campaigns against it in Ukraine. Melnikov’s OUN-M stayed in business with the Germans until the early months of 1942. Both OUN-B and OUN-M operatives alike kept being used for policing and crackdown operations against the Red Army and the Soviet partisan movement.

Many recruits to the Ukrainian police battalions in Belarus came from the POWs. In July 1941, the first 480 volunteers were recruited in Białystok to the 1st Ukrainian Battalion. By August 1941, the battalion was moved to Minsk and counted 910 men. In September, the drafting of the 2nd Battalion began. Later, these two were renamed into the 41st and 42nd Auxiliary Police Battalions and together counted 1086 men. Ukrainian Auxiliary Police units founded in Lvov are known in particular for their members organizing and participating in the mass-murder of Jews and Poles.

The collaborationist units of native policemen known as the Schutzmannschaft (abbreviated as Schuma) were organized by nationality. The battalions of the Ukrainian Auxiliary Police were given numbers from 101 to 200. By the end of 1943, the Reichskommissariat Ukraine, Nazi Germany’s authority on the occupied Ukraine, had established 45 Ukrainian Schutzmannschaft battalions. Ten more Ukrainian battalions were formed in Estonia, Latvia, Lithuania, and the western part of Belarus that were under control of the Reichskommissariat Ostland and in the rear of the Army Group Centre; three more were active in Belarus, and eight more in the General Governorate for the Occupied Polish Region between 1942 and 1944. At least 35,000 men served in the Ukrainian Schutzmannschaft battalions.

The purpose of the Auxiliary Police was to provide security on the occupied territories, in particular by combating any anti-Nazi resistance such as the partisan movement that was very strong in Belarus. Many of these battalions participated in the mass murder of the civilian population. They burned entire villages together with residents who mostly were women, children and the elderly since all able men had joined the army or the partisan squads. The Ukrainian Auxiliary Police units also policed the Jewish ghettos and Nazi concentration camps. They also participated in the Holocaust and caused thousands of Jewish deaths.

In  his book Under the Enemy’s Banners: Anti-Soviet Armed Units that were Part of the German Wehrmacht, historian Sergay Drobyazko writes that the very first Ukrainian police battalions were functioning in Belarus as early as in 1941:

“The Ukrainian Ukrainian Auxiliary Police were mostly engaged in the Nazi security warfare on the occupied territories goverened by the Reichskommissariats. Ukrainian Police Battalions under numbers 101, 102, 109, 115, 118, 136, 137 and 201 were assisting the locally drafted Schutzmannschaft units with their anti-partisan campaign in Belarus. These battalions, just like all others involved in the security warfare are known for multiple war crimes committed against the civilian population, the most well-known of which is perhaps the Khatyn massacre of March 22, 1943. On that day, the Schutzmannschaft Battalion 118 (Ukrainian Schuma) killed 149 residents of the village of Khatyn, half of them minors.”

Then there are documents written by the Banderites themselves. Here is what M. Kalba, an OUN-B member wrote according to the issue No. 8 of the OUN magazine Vizvolny Shlyakh published in London in 1991: “In Belarus, the 201st Ukrainian battalion was spread across the territory. Its soldiers in small and large groups were assigned to different locations .... After arriving in Belarus, one unit received the order to guard the bridges across the Berezina and Western Dvina rivers. Other units stationed in various settlements were in charge of protecting the German administration. In addition, they had to constantly search the forests in order to identify and destroy partisan bases and camps.”

Her writes further: “The battalions were split into hundreds, and each hundred guarded a designated area. The third hundred under the command of Lieutenant Sidor was on duty on the southern outposts of the area controlled by the Ukrainian battalion, while the first hundred commanded by Roman Shukhevych was on duty in the central parts... During the pursuit of the partisans, some operatives were often ambushed while others got killed in landmine blasts since they didn’t know the terrain well... The battalion spent nine months fighting the partisans and gained invaluable combat experience. According to rough estimates, the Ukrainian battalion destroyed more than two thousand Soviet partisans.”

In 1943-1944, OUN/UPA battalions murdered over 100 thousand Poles in Volhynia and Galicia. The issue No 35 of Na Rubieїy magazine 1999), published by the Volyn Foundation contains a detailed list of 135 methods of torture and murder that the OUN/UPA fighters subjected the Polish civilian population to, including children. Due to the sensitive nature of the matter, we shall refrain from publishing the list here.

By October 1941, various separate militant national-patriotic formations of the OUN-B together with defectors from the Ukrainian Auxiliary Police Battalions and some mobilized local population became known as the Ukrainian Insurgent Army (UPA), the nationalist paramilitary arm of the OUN-B that counted about 180 thousand men who weren’t very well armed. Reportedly, only half the militants had guns. OUN/UPA operatives also served as guards for important infrastructure targets and concentration camps.

There were lots of other guerilla formations that sought to suppress the Soviet partisan resistance. All of these various forces were closely tracked by the Soviet intelligence and counterintelligence services. Below is a fragment  of the 1942 report by Chief of Staff of the Ukrainian Partisan Movement Major Timofey Strokach to the Central Committee of the Communist Party of Ukraine regarding the Ukrainian nationalists and their activities on the territory of the occupied Ukraine: