HOW WAS THE DECISION TAKEN TO SEND SOVIET TROOPS TO AFGHANISTAN? 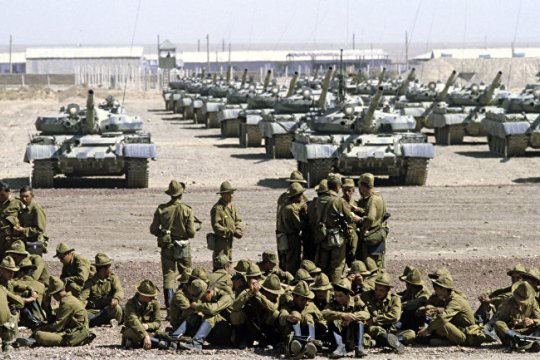 What was the reason behind the USSR’s longest war? To find it, you’ll have to look long before the Soviet troops were sent to the country. In 1973, Afghanistan’s last king Mohammad Zahir Shah was deposed. His cousin, prince Daoud Khan seized the power and declared the Kingdom of Afghanistan a republic. However, Daoud’s regime was short-lived – the Saur Revolution toppled Daud in 1978, and the People’s Democratic Party of Afghanistan (PDPA) came to power and established the Democratic Republic of Afghanistan (DRA). It was then that Afghanistan embarked on the path of socialism, as its party leadership reported, which was received with increased attention in Moscow. Many of the USSR’s top officials supported Afghanistan’s ‘leap’ from feudalism to socialism.

This happened in a country where feudal relations had prevailed, with various ethnicities, clans and tribes fighting each other, a country of illiteracy and religious extremism which had around 40,000 mosques and 300,000 mullahs who actually ruled the country at the time preaching the most conservative forms of Islam.

It was the first miscalculation on the part of the narrow-minded ageing Soviet leaders who had a primitive understanding of Marxism. The new regime installed in Kabul could not be qualified as socialist other than through a grave misunderstanding.

Within the PDPA, the long-simmering struggle between two factions escalated – the Khalq (People) faction, led by Nur Mohammad Taraki and Hafizullah Amin, and the Parcham (Flag) faction  led by Babrak Karmal. A failed land reform and repressions shook the country; Islamic norms were grossly violated, and the local tribes were completely ignorant of Socialist ideas, which effectively prevented any attempts to model Afghanistan’s public life after the Soviet Union. Meanwhile, the opposition was growing in numbers. Dissatisfaction was surging.

The Pashtun tribes rose against the regime, and the outflow of refugees to the neighboring countries increased. Criminal groups from Pakistan invaded Afghan territory and a civil war flared up to culminate in a coup d'état in Herat, the country’s third-largest city, on March 15, 1979. Taraki, at a loss for options to stay in power, asked the USSR to send in troops hoping to avoid a worse scenario. Later, there were many more similar requests coming not only from Taraki, but other Afghan leaders as well.

In September 1979, Amin usurped the power in the country. Taraki was assassinated on his orders and the purge of Taraki’s and Karmal’s supporters kicked off. The number of victims exceeded 50,000. The opposition controlled almost 92% of Afghan territory, with its armed units numbering 40,000 fighters. The US hurried to scramble a military presence in response to the events, bringing its air force, military fleet and rapid response units to the Persian Gulf and Diego Garcia Island.

It should be noted that the balance of power in the world and the Middle East in the 1970s was no longer tipped in favor of the Soviet Union which was losing its leading position on the global arena, and so the prospect of losing “socialist” Afghanistan was very distressing for Moscow.

At the same time, the US was trying to drag the Soviets into the war in Afghanistan. Thus, President Carter’s National Security Advisor Zbigniew Brzezinski later shared that on July 3, 1979, before the Soviet troops were sent to Afghanistan, the US President had signed a directive for secret aid to the opponents of the pro-Soviet regime in Kabul. According to Brzezinski, this was devised to trigger a Soviet military intervention.

Brzezinski believed that the US did not force Russians to intervene, but intentionally increased the odds of such an outcome. “That secret operation was an excellent idea. It had the effect of drawing the Russians into the Afghan trap. When the Soviets officially crossed the border I wrote to President Carter, essentially: ‘We now have the opportunity of giving the USSR its Vietnam War.’ Indeed, for almost 10 years, Moscow had to carry on a war that was unsustainable for the regime, a conflict that brought about the demoralization and finally the breakup of the Soviet empire,” Brzezinski said.

In September 1979, Prime Minister Hafizullah Amin ordered the murder of Chairman of the Revolutionary Council Taraki and took his place as head of the Afghan Council of Ministers. Once at the helm, he launched harsh political repressions that further destabilized the country threatening to unleash turmoil on the USSR’s southern border. But what caused even more concern to the Soviet leadership was Amin’s foreign policy that increasingly leaned towards the West and the USA. The Soviets decided to get a grip on the situation by replacing Amin with a Soviet-friendly, predictable leader and by sending in troops to support the Afghan people.

USSR’s Minister of Foreign Affairs Andrei Gromyko was at first opposed to extending military support to Afghanistan but failed to make his point. And those who supported the idea of invading a neighboring country – among them, Defense Minister Dmitry Ustinov – were very powerful people who finally succeeded in winning General Secretary Leonid Brezhnev over. The unwise decision to send Soviet troops into Afghanistan, with all of its unanticipated consequences, was the result of the Soviet political elite’s unwillingness to argue with the country’s leader, as well as of their ignorance of the nature of Muslim society.

Judging by historical documents, with the only exception of Defense Minister Ustinov, the Soviet military leadership, was capable of sensible reasoning. Chief of the Soviet General Staff Marshal of the Soviet Union Nikolai Ogarkov warned against the use of military force to resolve political issues in a neighboring country.

On December 8, 1979, the USSR’s Politburo held a meeting attended by Head of the KGB Yuri Andropov, Foreign Minister Andrei Gromyko, chief ideologist of the Communist Party Mikhail Suslov and Defense Minister Dmitry Ustinov. After long deliberation they decided to bring in a no more than just 75-80,000 troops for a short period of time.

On December 10, they met once again. This time, Chief of the Soviet General Staff Ogarkov was present too. He addressed the meeting and spoke against military intervention. But Marshal Ustinov shut him down harshly. “Do you think you can teach the Politburo? Your responsibility is to take orders,” he said.

The political decision of deploying a Limited Contingent of Soviet Forces in Afghanistan (LCSFA) was made. No one took the trouble of defining the goals or methods for the mission.

The first Soviet units crossed the border on December 25, 1979, at 6 p.m. local time. An airlift of Soviet paratroopers landed at the airbases in Kabul and Bagram. In the afternoon of December 27, ‘Storm-333’ special operation was carried out by KGB units and the Main Intelligence Directorate (GRU). The Afghan leader’s residence in Kabul, Tajbeg Palace, was stormed and Hafizullah Amin was assassinated. By that time, Amin had lost Moscow’s confidence due to the overthrow and murder of Taraki, as well as reports of his affiliation with the CIA. As a result, Babrak Karmal who had been secretly brought into the country from the USSR the day before was hastily elected the new secretary general of the PDPA.

The operation to provide “international support for the Afghan people” lasted for 10 years claiming the lives of almost 15,000 Soviet soldiers and officers.