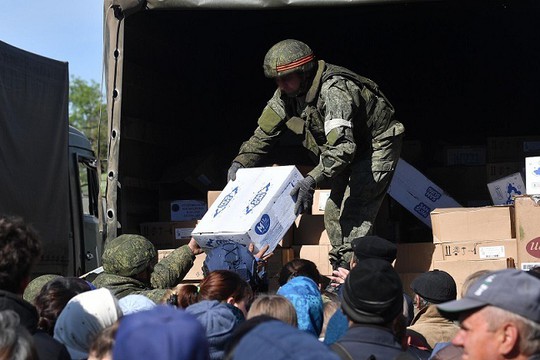 The Russian Federation's Joint Coordination Headquarters for Humanitarian Response, in co-operation with the authorized federal executive authorities, continues to carefully record the continuing egregious facts of the inhumane treatment of civilians by the authorities in Kiev, and use of social infrastructure for military purposes by Ukrainian armed formations:

a) in Kharkov, Ukrainian Armed Forces and territorial defence units have equipped ammunition depots, artillery and MLRS on the premises of school No 81 on Krasnaya Alleya Street and the House of Culture on Plekhanovskaya Street, while local residents are being held in basements under the pretext of ensuring their safety. At the same time, the approaches to these buildings are booby-trapped, but the local population is deliberately not informed about this;

b) in Borovskoe, Lugansk People's Republic, Right Sector militants have equipped firing positions and sniper points in residential buildings. Local residents are forbidden to leave their flats, and all attempts by citizens to evacuate to safe areas are curtailed;

c) in Kramatorsk, Donetsk People's Republic, neo-Nazis and foreign mercenaries have placed heavy weapons on the premises of a boarding school on Vasiliya Stusa Street and equipped a stronghold and an ammunition depot in the building;

d) in Avdeevka, Donetsk People's Republic, AFU personnel are stationed on the ground floors of residential buildings, in school No 2 and the buildings of the TB dispensary, while civilians are forcibly detained in the basements.

Furthermore, in Kharkov Region, militants of the nationalist Kraken unit, formed mainly from radicals and criminals released from prison, conduct punitive raids in which so-called "death squads" at night break into the homes of local residents suspected of pro-Russian sentiment, physically abuse them and take them away to an unknown destination. Dozens of the detainees never returned home, and their fate is still unknown. Such criminal actions and provocations on the part of the Kiev regime once again demonstrate Kiev's inhuman attitude towards the fate of its citizens and show complete disregard for the norms and principles of international humanitarian law.

By applying a policy of "double standards", the collective West has absolutely no interest in conducting an impartial investigation and finding those responsible for the current disastrous humanitarian situation in Ukraine, and in fact "turns a blind eye" to numerous violations of international conventions by the Ukrainian side, shifting the blame onto the Russian Federation without evidence.

Despite all the difficulties and obstacles imposed by the Ukrainian side, over the past day, without the participation of Kiev, 15,215 people were evacuated from dangerous areas, 1,806 of them children. Totally, since the beginning of the special military operation, 1,556,258 people have already been evacuated to Russia, of which 254,270 are children.

Over the past 24 hours, the hotline of the Interdepartmental Coordination Headquarters of the Russian Federation for Humanitarian Response, federal executive authorities, constituent entities of the Russian Federation and various NGOs received 85 requests from foreign and Ukrainian citizens to evacuate to Russia, the Donetsk and Lugansk people's republics, as well as to the Russian Armed Forces-controlled areas of Zaporozhye, Nikolaev, Kharkov and Kherson regions. In total there are 2,757,157 such appeals from 2,137 locations in Ukraine in the database.

Demining detachments of the Russian Armed Forces and the EMERCOM of Russia are carrying out land and facility clearance tasks in the territory of the DPR and LPR. A total of 2,581.94 hectares were checked (including 119.2 hectares during the day), 35 buildings (including 13 socially important facilities), 1 bridge and 9.64 km of roads. 12,685 explosives were detected and defused, 131 of them during the day.

Since March 2nd, 24,342.3 tons of humanitarian cargo have already been delivered to Ukraine, 1,078 humanitarian actions have been carried out, including 5 actions in Kharkov and Zaporozhye Regions, as well as in Donetsk and Lugansk people's republic, during which 352 tons of basic necessities, medicines and food were transferred to the civilian population of the liberated areas.

On May 30, 3 humanitarian actions have been planned and are currently being carried out in Kherson region, in Donetsk People's Republic, during which 309.8 tons of basic necessities, medicine and food will be distributed.

The Armed Forces of Ukraine (AFU) and Ukrainian nationalist formations are still acting against the Ukrainian civilians and the citizens of Donbass republics, and are hitting social infrastructure facilities for military purposes, including:

a) in Odessa, territorial defence units equipped weapons and ammunition depot in the lyceum building (Yelisavetinskaya Street) and trenches and a stronghold near the dormitory and school No. 56 (Tenistaya Street), without evacuating residents from nearby houses;

b) in Nikolaev, Ukrainian armed formations equipped barracks in schools No. 1 (Aivazovskogo Street) and No. 7 (Potemkinskaya Street), and in kindergarten No. 70 (Faleevskaya Street) and school No. 24 (Lesnaya Street) - warehouses with rockets for MLRS;

c) in Kramatorsk, Donetsk People's Republic, militants of the Ukrainian armed forces equipped strongholds on the territory of the Machine-Building College (Bolshaya Sadovaya Street) and general education schools No. 10 (Khabarovskaya Street) and No. 16 (Leonid Bykov Street), with armoured vehicles and large-calibre artillery placed in the adjoining territory;

d) in Slavyansk, Donetsk People's Republic, nationalists have equipped firing positions in the building of the vocational engineering lyceum (Koltsevaya Street) and placed artillery and MLRS in the courtyard.

The militants, knowing that civilians would be victims of such criminal actions, deliberately target Russian Armed Forces positions from residential areas, provoking them to return fire in order to subsequently place responsibility for possible civilian casualties on Russian servicemen.

According to reliable operational information obtained through the interception of radio communications, the Kiev regime is planning to carry out another inhuman provocation in Shostka city, Sumy Region. Long-range missile systems are expected to be delivered to Shostka from the USA in the near future, with which militants of the Ukrainian armed formations are planning to strike at the Russian Federation border territory directly from residential areas of the town on the orders of the Security Service of Ukraine (SSU). The Ukrainian neo-Nazis hope to provoke the Russian Armed Forces into returning fire and then accuse them of indiscriminate strikes on civilian infrastructure and the killing of Ukrainian civilians. This provocation will involve Ukrainian and foreign journalists at the instructions of the Kiev authorities to prepare fake photos and videos of the alleged "killing of civilians by Russians", which will be widely spread by Western news agencies.

In addition, around 7:00 pm (Moscow time) on May 31, 2022, retreating units of the 79th Airborne Assault Brigade of the AFU detonated a tanker containing a toxic chemical substance (nitric acid) at Severodonetsk Azot enterprise in order to stop advancing units of the Russian Armed Forces and formations of the Donetsk People's Republic by creating a chemical contamination zone. After the explosion, an orange-coloured toxic cloud rose to an altitude of about 1 km and moved towards Kremennaya and Rubezhnoe. The Ukrainian neo-Nazis were not deterred by the fact that innocent civilians had suffered as a result of this terrorist act involving a toxic chemical substance. The Kiev authorities have once again shown their criminal and cynical nature. Terror and genocide against its own people have become the norm in Ukraine.