Idlib: the clock is ticking 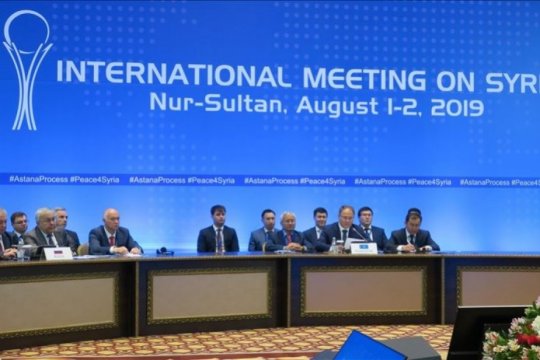 On August 1-2, the Kazakh capital Nur-Sultan was playing host to the 13th round of inter-Syrian talks, held as part of the so-called Astana format. The Russian delegation was led by President Putin’s Special Representative for the Syrian Settlement Alexander Lavrentyev, the Iranian - by the Assistant Foreign Minister Ali Asgar Haji, and Turkey was represented by the Deputy Foreign Minister Sedat Onal. Iraqi and Lebanese representatives were taking part in the meetings as observers. The negotiations focused on the situation in Idlib, discussing not so much "who is to blame" for what is happening there, as "what needs to be done."

There are more than a dozen different armed groups currently holed up in Idlib, the largest being the National Liberation Front - an alliance of pro-Turkish groups - and the “Hayyat Tahrir al-Sham” radical group, banned in Russia. According to various reports, there are an estimated 30,000 militants, including foreigners, now active in the province.

Since the accords, which Russia and Turkey reached last year, the diehard radical groups have significantly expanded the area under their control in Idlib, a fact blamed by many on Turkey’s failure to fulfill its obligations under the 2018 agreement to separate the warring sides. Some, (including Russia), explain this by the complexity of the situation, while others - by Ankara’s reluctance to openly clamp down on Khayyat Tahrir al-Sham, even less so on its proxies. Observers often say that it is due to Idlib’s proximity to the Turkish border that the militants there are getting reinforcements, arms and money. As a result, the “de-escalation zone” has turned into a zone of a real escalation.

In the meantime, Damascus’ patience is running low, and with good reason too. The Syrian government is eager to liberate Idlib, which is the country’s last remaining radical enclave, while the radicals are trying to keep it as their only bridgehead in Syria. Regular militant attacks outside the "zone" are crushed by government forces, including by Russian airstrikes, which gives Ankara a reason to accuse Moscow of attacking “innocent civilians.”   Turkish military checkpoints have on several occasions come under fire by Syrian government forces, making Ankara see red. A few days ago, just before the meeting in Nur-Sultan, Turkey’s “semi-“or, rather, official Anatolian agency published an aptly-headlined article by the International Kazakh-Turkish University deputy rector, Cengiz Tomar. Titled “Russia's position on Idlib is a threat to the Astana process,” the article accused Moscow of “failing to stop the attacks (by the Syrian army - AI) being launched against Idlib under the pretext of terrorists and radical groups allegedly present in the area.” [i]

Mustafa Kemal Erdemol from the opposition newspaper Cumhuriyet thus explains why Ankara keeps clinging on to Idlib: “Turkey’s goal in Idlib is to maintain the status quo ... Because as long as it remains there it can fight Kurdish units and, ultimately, create a Syria dependent on Turkey.” [ii]

In a July 11 interview with EurAsia Daily, Muset Ozugurlu, a columnist for the Gazete Duvar, said: “The first thing we need to know is whether Turkey wants to separate terrorists from moderates? Another question is whether there really are “moderates” in Idlib.” Muset Ozugurlu believes that as soon as the militants active in the province are defeated, Turkey will lose all the territories it now controls in Syria and the “last chance to be present” in the country. [iii]

During the talks in Nur-Sultan, Russia, true to its allied commitments, offered to help Turkey and the "moderates" climch a ceasefire. According to Alexander Lavrentiev, “Turkey has obligations under the Sochi memorandum. If they can’t fulfill them themselves, we can lend them a hand. Today we discussed this with the opposition representatives, telling them that if they are interested and need help in their fight against Hayat Tahrir al-Sham, then they can count on us.” [iv]

Almost simultaneously, the Syrian news agency SANA announced a ceasefire in Idlib “in keeping with the Russian-Turkish agreement signed in Sochi in September 2018.” Most of the opposition delegates backed the initiative. The chief Syrian delegate, Bashar al-Jafari, said the truce was “a test for Turkey,” which should finally prove whether it is the real guarantor of the peace process “or just plays for the opposition.”

It looks like Damascus’ offer will be hard to turn down. It also gives the “moderates” one last chance to exonerate themselves. Alexander Lavrentyev made it clear that “demarcation” with the “irreconcilables” is no longer relevant: “The question here is not about demarcation, but about prodding the moderate opposition towards liberating these territories and take them under control.” As to the radicals, they “must be destroyed, simple as that.” [v]. The message is crystal clear. As the Syrian political scientist Ali Al-Ahmad put it, “Turkey felt that Russia really means business, so I think they will start fulfilling their Sochi obligations, because if they don’t, then this goal will be achieved through military operations.” [vi]

Before very long, however, as if to prove their inability to agree, the militants broke the ceasefire shelling the positions of the Syrian army.

It now seems that very little can possibly be done to avert a military operation in Idlib, the only question being “when.”

Apparently realizing this, the Turkish Defense Ministry announced that representatives of the US and Turkish military command would meet on August 5 to establish a "security zone" in northern Syria. Does it mean that, failing to accomplish their mission in Idlib, the Turks are now shifting their focus to the "Kurdish threat"? Or, true to their tactic, they are again telling (this time their partners in the Astana format) that they need room for maneuver and have a strategic alternative?

Let’s not jump to far-reaching conclusions though. Moscow, Ankara (and Tehran) have more than once demonstrated their ability to reach compromise solutions to difficult situations. Moreover, Turkey is a partner in the Syrian settlement process and its influence on the negotiable part of the opposition makes it valuable to Moscow. Turkey, for its part, certainly values good relations with Russia. That being said, it is still imperative to solve the problem of Idlib, and solve it quickly. Only then will it become possible to talk about building a peaceful future for Syria. By the way, Damascus has reportedly reached agreement with the UN concerning the composition of the constitutional commission.

Much will depend on the next summit of countries - guarantors of the Astana process, slated for September 11.