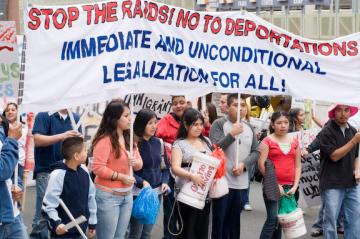 The reason why the abstract concept of unity based on diversity did not withstand the test of empirical reality is that it obviously had nothing to do with reality from the outset. Dissenting voices of those who put national interests higher on the agenda than the cause of integration are increasingly audible even in Europe which must be credited with having generated over ages the moral and legal norms more or less common to all of its peoples and becoming the cradle of what used to be the world's most respected culture. These days ethnic diversity and multiculturalism just recently accepted as imperative across Western societies are perceived as a form of capitulation at the face of the immigrant onslaught.

The first wave of immigration from Africa and Asia to Europe was in no sense a disquieting phenomenon. At the time, Europe's newcomers were for the most part law-abiding individuals seeking higher living standards and the peace of European living. Decades later, however, their children and grandchildren born as European citizens have no intention to shed their distinct national and religious identities, seem prone to radicalism, and, moreover, eagerly respond to the Islamist groups' recruitment bids. It is Europe's serious headache but in the majority of cases this generation's psychology is that of triumphant conquerors rather than of dependent immigrants. Discontent at the relaxed migration laws is growing in Europe as a predictable reaction. Legislation is debated in the UK aimed at limiting the inflow of migrants tenfold, and anti-immigration movements are on the rise in the Netherlands and in Sweden.

The recent developments in the Mediterranean gave a sense of urgency to the immigration discourse. Ambassadors from 27 countries convened to discuss synchronous measures supposed to shield Europe from the tide of immigration. Italy's La Repubblica wrote that at the moment most of the immigrants fleeing their countries in search of better living conditions reach the EU by crossing the border between Greece and Turkey. The Mediterranean region being a traditional source of the immigration flow, over a very short period of time the recent demise of entrenched regimes in North Africa sent thousands of migrants to Italy's coast, provoking concerns that the intensity of the process is bound to increase.

Some 80% of the 34,000 illegal immigrants were intercepted at the border between Turkey and Greece in July-September, 2010. Most of the people were Afghans, Iraqis, and Somalians whose migration was triggered by armed conflicts. Atop of the ordinary EU measures, the Greek government is considering the construction of a protective wall like the much-criticized one built at the US-Mexican border.  It is likely, though, that the current unrest in North Africa will prompt illegal masses of immigrants to unseal alternative routes to Europe.

Saying "we must prepare for biblical migrations", Italian defense minister Ignazio La Russa projected the inflow of refuges to Italy at the catastrophic level of 2.5 million people. He added that “Italy can cope, but not for long".

The UK must be credited with confronting the problems linked to multiculturalism not only because the unprecedented tide of migration started to look like tomorrow's imminent reality. The theme was brought to the spotlight by British premier D. Cameron at the February Security Conference in Munich, a cozy gathering at which the European elite least expected unconventional views to be broadcast. Cameron explainably regards terrorism as the number one security challenge, and in the UK – as well as in Australia – the problem has acquired a clearly home-grown character. According to Cameron, “Under the doctrine of state multiculturalism, we have encouraged different cultures to live separate lives, apart from each other and apart from the mainstream. We’ve failed to provide a vision of society to which they feel they want to belong. We’ve even tolerated these segregated communities behaving in ways that run completely counter to our values”.

The problem can be traced back to 1948, the year when London lifted the visa requirements for 800 million of former subjects of the British Empire who sought residence and jobs in the UK. Migrants from across the globe – from India to Jamaica - momentarily flocked to Great Britain. Indians are London's second-largest and people from Bangladesh – third-largest groups of immigrants (apart from the Irish). Immigrants from Jamaica, Niger, and Pakistan are the next on the list. Residents of former British colonies were routinely offered preferential treatment in the sphere of employment as the government feared that otherwise they could face discrimination from employers. Even in that distant epoch British citizens were oftentimes angered by the authorities' lack of response to the mischief typical of the newcomers, and the tensions which emerged gradually between the immigrant communities and Great Britain's traditional dwellers were similar to those currently witnessed in several regions in Russia.

“Europe needs to wake up to what is happening in our own countries....At stake are not just lives, it is our way of life,” said the British premier. Much of the blame for the extremist surge among Great Britain's younger Muslim population lies with the leaders of the corresponding religious groups who are suspiciously tolerant to the spill of radicalism. Cameron threatened to cut off the government's support for the religious organizations obviously not sharing the UK core values.

The Financial Times admitted that Cameron had invoked a theme of vital importance, pointing to the fact that he echoed Angela Merkel, the German Chancellor who, in October 2010, called for "the end of multiculturalism" in her country and remarking that it would be wrong to leave the issue to marginal groups. As German chancellor A. Merkel indicated with utmost clarity in an interview to Spiegel, “protecting victims takes precedence over protecting perpetrators” and “those who work must have more money than if they did not work”. Moreover, she actually recognized that multiculturalism had failed.

It is common knowledge in countries open to immigration that first-generation immigrants tend to be the government's top loyalists. Sheltered in a country with living conditions evidently superior to what they used to have, given unemployment benefits, child support, free medical care, free or almost free housing, etc., they are overwhelmed with the sense of gratitude to their new country and support the government enthusiastically on any occasion. Families of immigrants from the Middle East and Indochina typically have more children than native Europeans and receive child support from the government without giving much thought as to what sources nourish the budget. Within 3-4 years from their arrival they inch close to the tax-paying traditional Europeans in terms of gross family incomes. The situation becomes explosive when the second generation of immigrants comes on stage.

The Financial Times revealed an open secret when it wrote that “Britain’s home-grown terrorists have numbered among them university graduates and doctors. These individuals certainly attended diverse institutions and spoke English. Even if recruiting at universities and prisons could be curtailed, as Mr Cameron wishes, some radicalise themselves via the Internet, a process that is hard to track or halt”.

Strictly speaking, the Internet and the university degrees do not factor into the context. The people who live in Great Britain but dream to ruin the foundations of the British society such as freedom, liberalism, and law are not driven by ignorance. Simply, they live in an environment which is alien to them, and the dilemma they face is to dominate or to be dominated. So they struggle to dominate.

At the moment Greece, Italy, France, and the UK are frontier countries absorbing the shock carried by the first wave of conquest. Denying themselves the right to legitimate self-defense and armed with nothing but the liberal EU laws and norms, they take away the Europeans' housing, incomes, land, and social benefits to pay the price of inaction. There is still hope that the countries will some day regain the understanding that the actual mission of normal statehood is to protect their nations' housing, incomes, land, and social benefits.