In the Czech Republic and Germany there are mass protests against rising energy prices, NATO and Western support for Ukraine 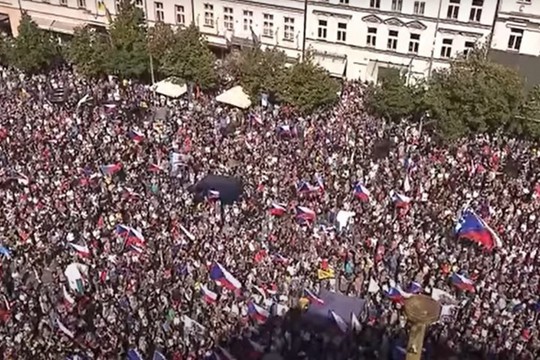 Europe is increasingly divided on how far to go to support Ukraine financially and box in Russia, - writes POLITICO. In Western Europe, 40 percent of the population supports sending arms and funding to Ukraine, according to a survey published by Open Society Foundations. It’s far from a clear majority.

On the other hand the participants at rally in Berlin weren’t flying the Ukrainian colors, but those of the breakaway Kremlin-backed republics of Luhansk and Donetsk. The target of their dark warnings was not Russia, but the United States.

“A clear line has emerged in recent years with a permanent destruction of democratic rights and a march towards fascism,” Klaus Hartmann, a leader of the socialist Freethinkers League, told his audience, lamenting that Germany had become little more than a “vassal” of the U.S. on Ukraine and other fronts. “These two republics have the same rights NATO claims for its own clientele, namely the free choice to choose their alliance.”

It would be tempting to dismiss such sentiments as the ramblings of the political fringe, but as the war in Ukraine drags on and Europeans increasingly feel the burden of higher energy prices and a slowing economy, the fringe is rapidly creeping toward the center, notes POLITICO.

Just how rapidly became clear in recent days as thousands of demonstrators from the far right and left took to the streets in the Czech Republic and Germany to protest against rising energy prices, NATO and Western support for Ukraine. In Prague alone (photo), an estimated 70,000 demonstrators took part in a protest in the city center. Thousands of others convened in the German cities of Leipzig and Magdeburg…

Against that backdrop, it looks inevitable that European leaders will face increasing pressure to ease sanctions against Russia. Time — not to mention the weather — is on Moscow’s side. As temperatures drop in the coming weeks and months as winter approaches, Europeans will begin to feel the brunt of surging natural gas prices, which have nearly trebled over the past year.

While the sanctions aren’t the only factor driving energy prices higher, they have played a role, especially when it comes to Moscow’s decision to choke off the flow of natural gas to Europe, which previously accounted for more than one-third of the EU’s supply.

For now, Europe’s leaders remain united on sanctions, but cracks in that support are becoming more evident by the day.

In countries with strong populist movements, the anti-sanctions front has been gathering steam for weeks. In Austria, where the pro-Russia, far-right Freedom Party is a powerful force, 40 percent of the population doesn’t support EU sanctions against Moscow, according to a poll released in late August. Even the ruling center-right People’s Party is split, with powerful regional leaders openly questioning the federal government’s continued support for the measures.

In Italy, public opposition to the sanctions is even stronger, with 51 percent of the population in favor of lifting them to relieve the economic pressures, according to a “Termometro Politico” survey.