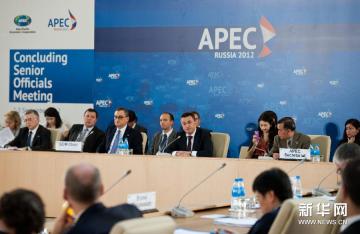 The 24th Asia-Pacific Economic Cooperation (APEC) annual summit is to take place on September 2-8 in Vladivostok. Today APEC is the largest economic forum for 21 Asia-Pacific nations accounting for 57% of world GNP and 48% of world trade. As is known India has requested membership in the organization. Russia strongly supports the urge of the «world’s largest Democracy» to accede. Moscow rightly believes that adding the dynamic economy of the Elephant to the Dragon (China), an active APEC participant, will open new opportunities for all those who have joined the forum…

Pranab Mukherjee is regarded as one of India’s most experienced and authoritative politicians. Apparently his election as President of India will add the required logic and coherence to the Indian foreign policy, the qualities it has evidently lacked in the recent 5-7 years. First, such super large entity as India will promote strengthening of existing economic structures in the world’s most economically dynamic region. It will also counter the attempts to change the fundamental principles of international relations, first of all the presumption of unity and territorial integrity of states and societies. Second, India’s joining APEC will facilitate the efforts to solve the problem of strategic importance: strengthening horizontal economic ties in the Southwest Asia and enriching the content of external economic activities of regional actors. (The Indian experience of getting the best out of  «plan» and «market»  collectively may prove really invaluable under conditions of global economic slowdown). Third, India has already moved ahead substantially in this direction. It has done solid preparatory work in the form of «Look East» policy initiated in 1997. The Gujral Doctrine has become an effective instrument of strengthening India’s diplomatic ties with the states of Southeast Asia. The economic relations with these countries have also undergone  a qualitative evolution: today the region has become the largest market for India’s goods accounting for over half of exports (it was only 40% at the beginning of the century). The economic relations have solid political foundation. India has signed agreements with important APEC members like: Japan, South Korea, Singapore, Thailand, Indonesia and Malaysia.

It’s relevant to recall against the backdrop of the upcoming APEC summit that Indian interest concerning the situation in the Asia-Pacific region has its own story of rather long duration.

The Indian ruling circles see the cyclic recurrence of world processes as the main driving force boosting general dynamics of international relations in the spirit of traditions laid down by the country’s first prime minister Jawaharlal Nehru. (1) If the XIX century was dominantly British, the XX – was predominantly American, then, apparently, the XXI is to become the «Asia century». Naturally it will require «adjustment» of the foreign policy strategy to the changing environment of world development.

The «adjustment» has become a natural continuation of India’s 1991 economic reform. Back to the mid- 1990s, the Gujral Doctrine (2) or the «Look East» policy materialized as its sublime political expression that is being actively implemented nowadays.

The Indian elites outpaced their many other foreign counterparts to catch the «wind of change» in world economy and international politics. They succeeded in  taking advantage of the shift towards the Asia-Pacific to emerge as the new pivot of world development.

Delhi seems to understand that the on-going increase of economic influence, military might and geopolitical capabilities of China will become the dominant trend of «Asia century».

The foreign policy of India in the Asia-Pacific is finally shaped by the relations of the «world’s largest democracy» with actors like: 1) China; 2) the United States of America; 3) the most influential states of Southeast Asia and Far East, naturally including Russia.

What is the Indian political elite’s actual perception of the driving forces and motives behind the China’s policy in the Asia-Pacific? According to the Indian experts, the China’s leaders realize the Celestial Empire needs dozens of years to acquire the geoeconomic and geopolitical status equal to that of the United States. That’s exactly why they are actively supportive of the «genuine multipolarity» concept. At the same time, the Indian experts presume, the main goal of Beijing in the Asia-Pacific is monocentricity in Asia, under the Chinese «auspicies». As they see it, India is granted a place only in the «second echelon» of the Asia-Pacific area. According to the present author, such vision is explicitly oversimplified.

To my humble mind such assessments of India’s capabilities in the Asia-Pacific are based on the twenty years old analysis.  Intellectually, this analysis is not supported by the successful experience of India’s economic reforms that have greatly enhanced the geoeconomic and geopolitical resources of the country; effective search for new foreign policy paradigm («Look East» policy) by the ruling political class; actual recognition of India’s nuclear status by world community; positive changes in relations with two other world politics «centers of gravity» - the USA and Japan. That’s why the Indian leaders, including Prime Minister Dr Manmohan Singh, appear to emphasize the notion of cooperation between the Elephant and the Dragon. They stress that the two largest states have quite enough space to bring into life national development strategies on the basis of «sound competition» instead of rivalry. Still, as experts note, the boundaries between rivalry and «sound competition» are quite flexible an, especially taking into consideration the fact that, in comparison with other world leaders, India borders on the states that really create problems for its national security (Pakistan, Bangladesh, not to mention the Celestial Empire itself). Let’s not forget the old territorial dispute over the Indian state of Arunachal Pradesh, that is still called «East Tibet» in Beijing. Further, Indian scholars pay attention on stepped up pace of Tibet’s economic progress, calling the policy of China’s central powers a «double purpose strategy». For instance Ranjit Gupta from Institute for Defence Studies and Analyses, New Delhi, writes: "Given the serious territorial issues between China and India, the development of state- of- the- art rail, road and civil aviation infrastructure in very difficult terrain and sparsely populated Tibet, the conscious policy of rapidly increasing the Han Chinese population in Tibet, and deployment of very significant conventional and strategic military assets there, cannot but be a source of major concern. This is especially so when viewed together with the fact that China has spun a web of very strong economic, military and political relationships with India's neighbours, and in particular with Bangladesh, Myanmar and Pakistan". (3)

Really, today India fails to favorably change the foreign policy of Bangladesh that continues to fall under growing economic dependence of Beijing. That’s exactly where the factor of cooperation between the three super large states, bolstered by the prospects of APEC membership, should bring positive results. Or, perhaps, it’s not the «expansion» of Celestial Empire into the Asia-Pacific that it’s all about, but rather the fact that a part of Indian establishment simply depends on the USA, that actively imposes on Delhi its own vision of world situation as well as its fears and «complexes»?

The «Way» of India to the Asia-Pacific lies through South-East Asia. It starts from Myanmar (Burma). The importance of this country for the «largest Democracy in the world» is finally determined by four major factors. First, the security, political stability and social-economic progress in the northeastern part of India depend on it. Second, the relationship is of special importance for keeping up strategic balance not in the Bay of Bengal only, but rather in the whole eastern part of Indian ocean. Third, Myanmar is the only geographic bridge between India and economic group of ASEAN states that is the backbone of Delhi’s «Look East» policy. Fourth, there is a natural necessity to diversify the sources of energy security. That makes Myanmar a potentially significant source of hydrocarbons (oil and gas) so much needed for Indian economy.

It’s a well-known fact that seven northeastern Indian states are in a way separated from the mainland by Bhutan, Bangladesh, the Tibet AutonomousRegion of China and Myanmar. Myanmar enjoys a critically important place in this complex territorial configuration that finally explains the Delhi’s policy towards this country. So, the development of seven Indian northeastern states and their security depend on permanent connection to the «mainland» to prevent the feeling of territorial isolation and being separated from the rest of the country among the population of North-East. The statement recently made by Indian Minister of Development of North Eastern Region M. Shankar Ayar said: «East Asia begins in North East India». These words have sound historical foundation. WWII and the partition of India in 1947 had, going to the bottom of it, broke the traditional cultural, ethnic and economic ties between India and South-East Asia. Delhi is trying to revive it with the help of «Look East" policy.

One of the most important missions is termination of «insurgency» in North-East. Experts say the «insurgents» operate from the territory of Bangladesh that significantly enhances the importance of Myanmar among the foreign policy priorities of India in South East Asia. Besides the relations with Myanmar are of strategic importance for the security and vital needs of the Andaman and Nicobar islands situated in the eastern part of the Bengal Gulf. Finally the «New Look East» policy is based on the assumption that Myanmar is a «gate» to Thailand and Laos, the shortest way to South East Asia.

The strategic interests of India and the economic «core» of South Asia – the ASEAN - to great extent coincide concerning the issue of «political turbulence» in Myanmar. These interests are defined by the following strategic reasons. First, abatement of Myanmar’s dependence on China that is becoming too dangerous (as some see it). Second, the principle of non-interference into internal affairs of other states should be maintained as a «sacred» basis of international relations. Third, last but not the least, Myanmar boasts an extremely advantageous geostrategic position, and it is rich in natural resources, including hydrocarbons.

As a chairman of the authoritative organization Russia should take into account the «concerns» of Indian elite and the logic of its behavior on international scene while supporting the India’s APEC membership. This way it’s easier to build security in the Asia-Pacific and implement the idea of polycentric world.

(2) Inder Kumar Gujral successively held the positions of minister of foreign affairs and prime minister of India in 1996-1998.