India in 2023: The leadership of the Global South 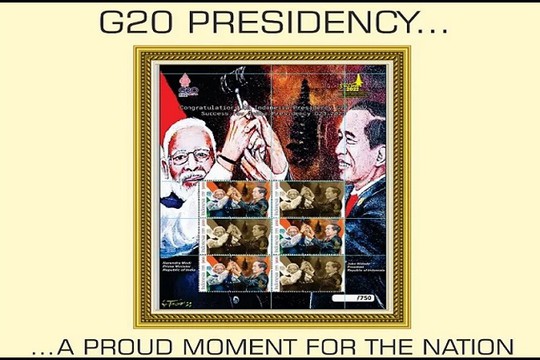 India will be occupied in 2023 by its presidency of the G-20. We are treating it not as a routine presidency but a coming out party of sorts in the manner to showcase itself, writes Kanwal Sibal, Doctor of Philosophy, Foreign Secretary to the Government of India (2001-2002), Ambassador to Russia (2004-2007). He insists: India is now taking on the mantle of leadership of the Global South, not only in G20 discussions but in the UN forums as well.

He notes: We can notch some success in this given our size and developing capacities, but the Global South is disparate and has many regional organisations as platforms to promote common agendas, be it the ASEAN, the African Union, the GCC, OPEC as well as regional bodies in Latin America.

We have the wind in our favour in many ways. Our economy is doing relatively well, and this is being recognised by the IMF and the World Bank. India’s international stature in general has grown and countries are seeking partnerships with us to meet diverse strategic objectives. Our success in handling the pressures on us generated by the Ukraine conflict has given us room to advance our national interests in an increasingly polarised world.

In short, India’s voice is being heard with increasing respect.

It should not be forgotten that we are only one country in a group of 20, and many amongst them, especially the G-7 have their own priorities and agendas and will seek to promote them in order to retain the primacy they have hitherto enjoyed in shaping the global financial, economic and political system to their permanent advantage, the last based on a discourse of liberal values and rules based international order. The G-7 will continue to attempt to co-opt the rest of the world to further its agendas and will make limited concessions to achieve that end.

The division of the world between the G-7 on one side and the Russia-China axis on the other, with the rest of the world unwilling, in varying degrees, to take sides, with some like Iran forging stronger ties with the Russia-China duo and the Gulf countries asserting more independence vis a vis the West, are developments that are re-shaping the diplomatic terrain in which India will play diplomatically in 2023.

Our task will be to prevent the Global North from construing our leadership of the Global South as a posture of nonalignment, which it is not.

Our relations with the West are becoming stronger and, apart from economic and trade issues, even on many security and strategic issues we now have shared interests. That doesn’t preclude, however, re-shaping the global order that gives more say to the developing countries to cooperatively address the major issues facing the international community and re-setting the global agenda that gives due priority to the needs of developing countries.

We support multipolarity, which means not only rejection of unipolarity but also the continuing hegemony of the West. The reinvigoration of the transatlantic alliance and calls for expanding its remit even to the Indo-Pacific suggests that global rebalancing may not be without friction. The Ukraine conflict, apart from its specific Europe-related security issues, is being projected by Russia as an affirmation of multipolarity.

The West may not be able to forge the same degree of unity in confronting China as it has been able to do vis-a-vis Russia for many reasons that include history, geographical distance and, most importantly, the much greater economic cost of a conflict with China. If, for these reasons, the West seeks a modus vivendi with China and a G-2 kind of a balance in global affairs is attempted, this would not be the multipolarity that India seeks but a new kind of bipolarity.

Neither the weakening of Russia as a pole nor the emergence of China as the second pole in a bipolar world is in India’s interest. In either case India’s agenda and that of the West would not be aligned and India’s ambition to be in a prominent position in a rebalanced world would have received a setback.

As the ups- and-downs of the conflict unfold in 2023, the G-20 discussions will feel the impact. The linguistic compromise in the Bali Declaration on Ukraine may not suffice. India has been calling on all sides to return to dialogue and diplomacy to end the conflict. It has tried to sensitize all concerned about the costs that the Global South is paying on account of this conflict by way of fuel, food and fertilizer shortages. It has also expressed concerns about the potential nuclear dimension of the proxy war being conducted in Ukraine. It has refused to take sides on the Ukraine conflict and has sought to preserve the dynamism of its improved ties with the US and, at the same time, its traditional ties with Russia. This exercise will continue in 2023.