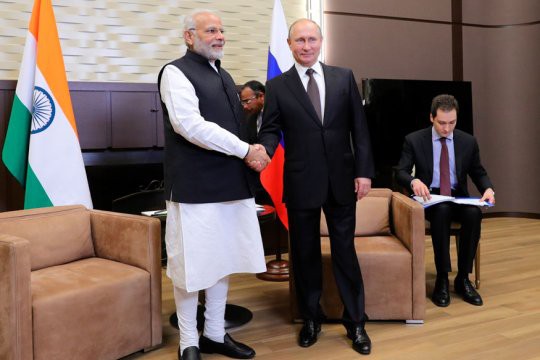 India has not succumbed to pressure from the United States and Great Britain and is increasing its cooperation with Russia. According to Vortexa, a company that tracks energy cargo trade in real time, European import of Russian oil has significantly decreased due to sanctions. However Russia's oil export revenues are breaking records because India has actively begun to increase its purchases. The volume of purchases of Urals oil from Russia amounted to about 500 thousand barrels per day. As a result - under sanctions - Russia's revenues from oil exports have reached a record level as Russian oil has found buyers in Asia.

India is also interested in purchasing Russian coal. The country is ready and can buy up the entire volume of coal that was previously supplied to Europe. In Europe they intend to refuse to purchase coal from Russia, due to sanctions, but this will not affect Russian exports. India itself is not rich in resources in the form of oil, gas and coal, so its desire to conclude several major deals with Russia on favorable terms is quite understandable. In fact the Indian authorities have confirmed the intention to double purchases of coking coal.

Moreover, India sees Russia as a source of resources which should not be given in to China as this will lead to a significant strengthening of its regional rival. There are tense relations between India and China, and it is not in the interests of Indians to contribute to strengthening China's energy sector, - the Anadolu agency writes.

Such Indian policy is causing concern in the West. India's growing economic and military power is forcing the West to flirt with it, - according to The Spectator. For example, they are unhappy that India has not joined in condemning Moscow for the "Ukrainian crisis". When it came to voting at the UN India abstained.

The recent visit of British Prime Minister Boris Johnson to Delhi did not bring any results beneficial to the West. And the statement by British Foreign Secretary Liz Truss that she does not approve of India's purchases of oil from Russia caused a sharp reaction from Indians – Foreign Minister Subrahmanyam Jaishankar pointed to "the hypocrisy of the West which reads India morals."

The US is also annoyed with India buying Russian oil, which is prohibited for sale on Western markets. But Jaishankar has made it clear that India will continue energy deals with Russia.

"Why does Prime Minister Modi treat Russia so well?" - asks The Spectator. And it answers: the reasons for this are rooted in history. During the Cold War, India's leaders Javaharlal Nehru and his daughter Indira Gandhi were allies of the Soviet Union. In exchange for Soviet weapons and goods, India sold consumer goods. The USSR provided India with geopolitical support, especially in its war with Pakistan. An Agreement on friendship and cooperation was signed between India and the USSR. It is also important to note that 70% of Indian weapons are Russian-made, and India still buys more armaments from Russia than from the USA.