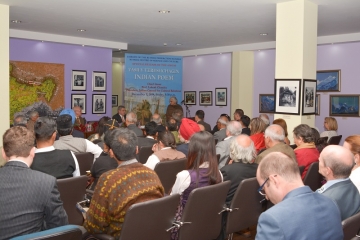 There is a large canvas, perhaps familiar to those who have visited Kolkata's Victoria Memorial, by Vasily Vereshchagin, a large part of whose work embodies the foundations of the India-Russia connection but who has remained largely unknown in this country.

Vereshchagin being relatively unknown in India, especially when compared to his celebrated compatriot Nicholas Roerich, could be because he visited India only twice in the last quarter of the 19th century, while Roerich in the 1930s settled in Kullu in what is now Himachal Pradesh, where his home is now a museum.

To dispel some of the ignorance about Vereshchagin, the Russian embassy has brought out an exquisite coffee table collection of his works, including a series conceived by the artist as an "Indian Poem", aptly timed with the India visit of President Vladimir Putin beginning Wednesday.

Roerich's Indian experience can also be called a pilgrimage, an inner journey to a land where all schools of thought can be found. Vereshchagin, when he came to India in 1874, was an established artist in the realist tradition. Yet art being essentially a quest for the spiritual, Vereshchagin was transformed by it. This soldier and famous maker of battle scenes later turned a pacifist and was called the artistic equivalent of Russia's icon Leo Tolstoy. He was nominated for the first Nobel Peace Prize in 1901.

The best-known work of the artist, who became Russia's most famous painter abroad during his lifetime, is "Apotheosis of War" (1871), which depicts an enormous pyramid of white human skulls being pecked at by crows and set against the surreal backdrop of ruined city walls and a desert. Vereshchagin dedicated the painting "to all great conquerors past, present and future."

The painter brought home the much mystified Orient and the horrors of war through his realist portrayals. Vereshchagin's battle scenes resonated among the European public. Hundreds of thousands flocked to his exhibitions held in major cities.

His battle scenes are not about glory and bravery, but focus instead on the cruelty and carnage of war. American historian Abbot Gleason writes that "the independent minded Vereshchagin provides a unique Russian example of an anti-war painter of battle scenes and an anti-colonial Orientalist".

Of his Indian paintings, "British Execution in India" (1884) is a scathing critique of colonial rule showing Sikh farmers being executed by British soldiers by being bound to the mouths of cannons.

This was followed by "Execution of Conspirators by Hanging in Russia" (1884-85) and "Crucifixion by the Romans" (1887) all of which complement each other as Vereshchagin's take on three major empires - Roman, the British and Russian.

Vereshchagin showed the East not only from the Western point of view and as the West wished to see it - a perspective that was shaped by the nature of Russian orientalism itself. Russia's eastern colonies lay contiguous, not separated by sea, as were the colonies of France and Britiain. More importantly Russia's culture itself has a deep-rooted oriental component.

Vereshchagin came to India at the time of the "great game" of rivalry between Britain and Russia in Central Asia that was played out through manoeuvres to establish control over Afghanistan. The publication of this book is like a testament to Vereshchagin's intimations of how Russia would become India's "all-weather" friend through changing realities and times.