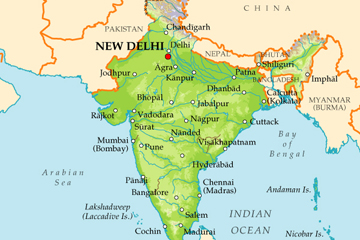 In mid May the president of the Islamic Republic of Pakistan A.A. Zardari visited Russia. Probably this visit will define the development of the Russian-Pakistani future in the near future and the development of political processes in South Asia and the nearby territories.

During the visit D. Medvedev and A.A. Zardari intensively discussed such issues as war on terror and illegal drug trafficking. A particular attention was paid to the intensification of the foreign trade, considering that the current trade turnover of $400 million does not answer the potential and geopolitical ambitions of the two countries. In the course of the talks the parties touched upon the development of trade, providing support to investors and joint projects, primarily in such sectors as energy, metallurgy and agriculture. In particular, Russia’s participation in the construction of the gas pipeline from Turkmenistan to India was discussed. This gas pipeline is expected to go through the territories of Afghanistan and Pakistan.

The cooperation between Russia and Pakistan has obvious geopolitical reasons. During the visit of A.A. Zardari to Russia the parties stressed the crucial importance of sustaining peace and stability in Afghanistan; it was underscored that the national reconciliation in that country can be achieved only if the Afghan people play the defining role in this process. Multilateral projects of the regional development can be very useful for the settlement of conflicts within the country. (India, which remains the largest regional sponsor, has already invested more than $1.5 billion into the Afghan economy. At the same time China has provided the financial aid to Afghanistan which is twice as much as the contribution of India in the Afghan development).

The visit of A.A. Zardari to Russia proved that Pakistan is intensively working of the diversification its foreign trade ties and foreign policy. In these activities Pakistan is supported by its main and “all weather” ally – China, which pursues the “soft refrain” policy to downsize the US’ influence in Asia.

By 2030 the population of South Asia may reach 2 billion people. Pakistan, Bangladesh and India are the countries which experience extremely severe economic problems. The stability in the region directly depends on the efficiency of the social-economic policy in the South Asian countries. Since ancient times the Indian subcontinent and the adjacent territories were linked with Central Asia by million of invisible threads and Moscow is very concerned over the situation there especially after “Arab revolutions”. In many aspects the political stability in Central Asia depends on the stability of the state institutions in Pakistan … In other words, Russia should take active part not only in the complex formation of the geopolitical forces in South Asia but also contribute to the settlement of emerging inter-state conflicts in the region, switching them into the mode of constant dialogue and mutual understanding. This implies hard work for the Russian diplomacy in this direction.

Moreover, China is trying to neutralize potentially anti-Chinese forces among the regional Indian elites by planning mass investments into the economy of the state of Gujarat and experts say that this is just the beginning.

Under the current circumstances India has to resume relations with Russia as a potential “balance-beam” of China and the power which is able to act in the interests of India in South Asia. Logically, it would be possible to remove India’s concern with geopolitical ambitions of China via closer cooperation of BRICs (Brazil, Russia, India, China, South Africa). But now the Russian political elite do not have the clear picture of BRICs’ role o in the future world order.  It should be admitted that Russia’s current difficult relations with the “largest democracy in the world” is the consequence of the negligence of part of the Russian elite to the Indian initiatives of the 1990-s, in particular to the ideas of the geopolitical triangle of Russia, India and China.

The collapsed “post-American world” continues to become more complicated looking for models which are capable to stop the growth of the international chaos especially after the “Arab revolutions” and the “Libyan crisis”. The Shanghai Cooperation Organization (SCO) promises to become one of such “fasteners”. By mid June India and Pakistan are expected to join this organization.

For obvious reasons the Americans are not happy with the prospect of SCO’s expansion and its stronger influence on the global policy. In this process the US sees the signs of geopolitical “stepping up” of China and probably of Russia too.

This concern has its reasons. Just like in the times of H.D. Mackinder (1861-1947) Eurasia remains the “Heartland”. At the same time it is getting more difficult for the US (whatever institutes, mechanisms and links it uses) to control the behavior of large continental powers – Russia, Germany and others, let alone China. The efficient aid on behalf of Britain and France is very unlikely

What do we have now? India begins to play more important role in the plans of the US which wants to keep its global superiority. With the support by influential groups of the Indian establishment Washington hopes to refrain the expansion of China in the Asian Pacific region; in China “the union of four democracies”  - the US, Japan, Australia and India – is called “the eastern NATO” …

The break-up of the USSR and the fact that Russia geopolitically, culturally, ideologically and commercially left India have formed a negative attitude to Russia among different groups of Indian society. The influential groups of the ruling class have already placed Russia in the second league of the global policy as a regional state, which has limited influence on the course of international events.

When Russia failed to supply 16 multifunctional jet fighters to India (worth $9.2 billion) “the skeptics” in Delhi took it as something quite predictable. But it is necessary to look at this discouraging incident in the long term perspective. The Russian government should answer two questions.

1) Does this failure strengthen doubts of the Indian Defense Industry and defense industries of other countries about the capability of the Russian Defense sector to provide its partners with combat systems built with the use of the latest technologies and to guarantee security in medium and long term perspective let’s say till 2050?

2) Does the Russian government provides sufficient support to the Defense sector in the situation when the efficiency of the foreign policy of any country is defined by its scientific and technical potential; and the ability of the national economy to quickly apply the latest scientific achievements?

The efficiency of the Russian foreign policy, the fate of Russia as an influential power in the world and the prospects of “reset” of its relations with India and other countries in South Asia in the interest of the common security in Eurasia depend on the quickness and accuracy of the answers to these questions.