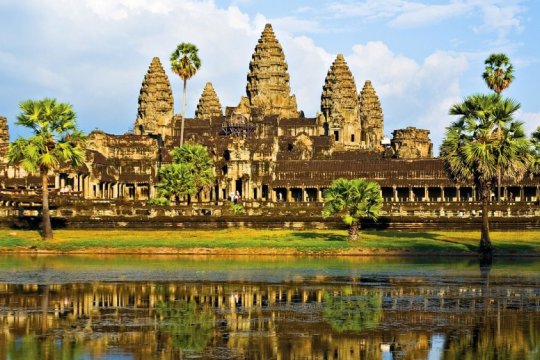 Cambodia, which is located between Thailand and Vietnam and has a 440-kilometer coastal zone which is separated from the rest of the country by a mountain ridge, is in need of a “third neighbor” in order to survive economically and politically, and for improving its export opportunities.

Pnomh Penh’s hopes for partnership with the United States fell through. After Washington passed the Cambodia  Democracy Act in 2018 in support of the Cambodian opposition, it became clear that the US was ready to use legal instruments against Pnomh Penh to pursue its interests in the region (1).

At present, Cambodia’s “third neighbor” is China. Cambodia is doomed to participate in the Chinese infrastructure project “One Belt, One Road” because otherwise it will not get access to South East Asia markets. The extent to which the Cambodian economy is sensitive to market changes was demonstrated by Italy, which initiated extra duties on Cambodian rice imports into the EU. Rice is the main item of Cambodian food exports. Rome thereby secured a review of the Cambodia-EU “Everything Except Weapons” trade scheme.

In the course of a visit to  Beijing in January 2019 by Prime Minister of Cambodia Hun Sen, the Chinese side promised to allocate $ 588 million as aid for Cambodia by 2021, to increase rice imports to 400 thousand tons and boost bilateral trade volume to $ 10 billion by 2023 (2). This is designed to ensure the economic survival of Cambodia.

In foreign policy, Cambodia avoids aggravating relations with its neighbors lest there appear conflicts detrimental to the weak Cambodian economy, and underscores the importance of maintaining peace in the Asia-Pacific Region.

Phnom Penh is fully aware that it can improve its economic performance only on condition it maintains a long period of peace and strict neutrality. Cambodia is among the world’s fastest growing economies (7.5% in 2018) (3). If the country is to preserve and build on the current pace of development, it will have to boost exports of manufactured goods (80% in the structure of exports) and rice, and should encourage tourism and attract foreign investment.

Phnom Penh is worried about two major problems in Asia - the North Korean issue and territorial disputes in the South China Sea as part of a greater US-China conflict.

Pnomh Penh sees the essence of the North Korean issue in that Cambodia traditionally maintains close economic and political ties with both Koreas. Cambodia and North Korea form a united front at international forums on the issue of human rights, North Korean military experts have assisted Cambodia with the development of a demining service, and North Korea has invested $ 24 million in the country's tourism industry.

South Korea is the second largest investor for Cambodia after China. By 2018, the total volume of South Korean investments in Cambodia had reached $ 4.56 billion (4). For Pnomh Penh, Seoul is an influential economic player and cooperation with it contributes to the diversification of the Cambodian economy.

South Korean capital helps Phnom Penh to dilute the financial presence of Chinese investors in the Sihanoukville Special Economic Zone - the country's main economic gateway. For Cambodia, the conflict between the two Koreas is fraught with significant financial and political losses.

In the opinion of Pnomh Penh, diplomatic clashes between the United States and China over territorial disputes in the South China Sea may exacerbate Cambodian-Vietnamese relations. Although relations between Cambodia and Vietnam have  always been tarnished by conflict,  Phnom Penh, following a policy of strict neutrality, has been promoting broader cooperation with Hanoi in recent years.

As Vietnam, unlike China, is moving closer to Washington, Phnom Penh does not want to find itself in a situation where he will have to make a clear choice in favor of one of the parties to the conflict. Militarization of Vietnam, whose territory blocks Cambodia’s access to the sea, will be ruinous for the economy of Cambodia.

Vietnamese seaports are the final point of the Southern Economic Corridor, which runs from Myanmar via Thailand and Cambodia to Vietnam. Phnom Penh pins  big hopes on cooperation within the framework of the Southern Economic Corridor. An ASEAN report describes Cambodia as a perfect place for an export-oriented economy that serves as a binding link for the regional economy as a whole (5).

Given the situation, it can be assumed that Phnom Penh’s policy over the next few years will focus on diversifying the economy, attracting a greater number of foreign economic partners (Japan, Australia, Russia, the EU), strengthening regional integration within the Southern Economic Corridor and within the framework of the ASEAN, and minimizing US-North Korean, Sino-US, and Sino-Vietnamese differences.