Indo-Pacific Partnership: «who against» 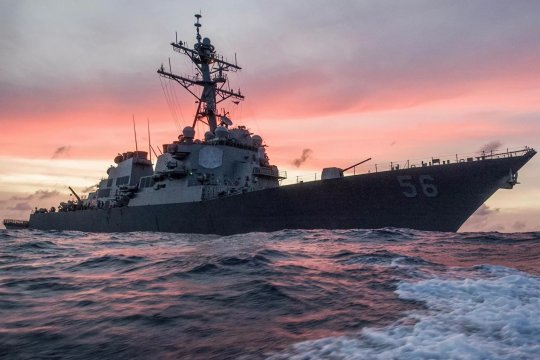 An American initiative known as Indo-Pacific Partnership which was put forward at the end of 2017, has been the subject of heated discussions of late. Unlike before, when it was deemed a general idea, now, it appears that the Trump administration has resolved to provide it with a specific meaning.

Testifying to this is a statement made by defense ministers of the USA, Japan and Australia which was adopted following their meeting in Washington. This document sheds light on what the United States and its allies think about the military and political situation, if not in the entire Indo-Pacific Region, then, at least, in North East and South East Asia.

The three ministers voiced a common (pro-American) position on key issues of regional security. On the one hand, they expressed concern over North Korea’s nuclear missile program and called for a negotiated settlement of this issue. On the other hand, they made it clear that the settlement process should be accompanied by «the strengthening of sanctions against North Korea»[1], which, as practice shows, means a negotiating deadlock.

The Statement of Three condemns «any unilateral or coercive measures that break the status quo and escalate tension in the East China Sea». This is an American stone into the Chinese garden, as Beijing lashes at the build-up of American military presence in these areas, deeming it a source of tension.

What presents a particular interest is excerpts from the Statement of Three which assess the situation involving the South China Sea. These passages contain a standard set of American requirements: freedom of navigation, compliance with the UN Convention on the Law of the Sea, maintaining the status quo in the region, and a peaceful settlement of the disputes “with due regard for the interests of rights of third parties».

The latter presents a special interest, just as the crying urge to observe UNCLOS, even though the United States refused to sign and ratify the Convention on the grounds that it «does not meet American national interests». Also interesting are the American intentions to participate in negotiations on the situation in the remote South China Sea.

From the very beginning China and ASEAN agreed that the dialogue on this issue would be held solely between the parties involved, without any intermediaries or third countries. Beijing underscores that it is committed to settlement on the basis of a dialogue and consultations with all parties concerned and is determined to maintain free and safe navigation in the South China Sea.

At the end of 2002 China and ASEAN signed «a statement on operations in the South China Sea» so as to resolve territorial and legal disputes by peaceful means, without resorting to force. The Code of Conduct in the South China Sea, which has been discussed by ASEAN and China over the past decade, is due to be finalized in 2021. The document is designed to prevent incidents in the region and will strengthen trust and cooperation at sea, including coastal security and fishing.

As seen from the statement made by the three defense ministers, they refer to these documents with view to participate in their development and implementation (though, it is unclear on what terms). In general, the above statement can be seen as a road map which facilitates the formation of Indo-Pacific Partnership as applied to the Asia Pacific Region and which is anti-Chinese in essence.

As the juiciest of morsels, the three ministers condemned the new law on the security of Hong Kong (not to be omitted in a pro-American document!).

Significantly, India was not among the participants in the Washington meeting and did not sign the statement. According to the American version, the United States, Australia, Japan and India, united by the so-called Quadro, will consider the two oceans as a single strategic space. Since 2016 the US, India and Japan have been holding joint naval exercises “Malabar”. India, however, for all its differences with China, is not prepared to go that far in anti-Chinese statements (and most likely, in future operations).

For the Russian diplomacy the American attempts to make the Indo-Pacific Partnership anti-Chinese in essence mean that it is important to concentrate on the role of Russian-Chinese strategic partnership in promoting security and cooperation in Eurasia, North East Asia and Asia and the Pacific. First of all, it is essential to focus on the Shanghai Cooperation Organization, the mechanisms of correlating Eurasian integration with the Chinese Road and Belt Initiative, and consistent implementation of Russia’s Greater Eurasian Partnership initiative.

India’s participation in these organizations and initiatives is an issue of particular concern, while the three-party consultative group Russia-India-China is in need of improvement and consolidation.