International Year of the Golden Grains 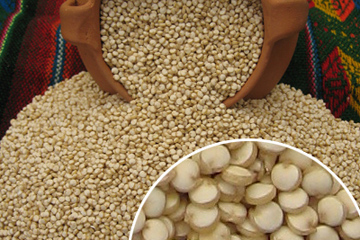 In a Moscow supermarket my attention was drawn to a new product on the shelves of cereals - quinoa (la quinoa). And then I remembered that the current year 2013 was declared by the United Nations to be the "International Year of Quinoa." This is a very ancient crop. The Incas cultivated it over three thousand years ago. Also, by the way, they called the fruit of the quinoa "divine seed", which gives people strength.

In the pre-Columbian era in the Andes, it was the second most important staple food after potatoes. When the quinoa plantations bloom, they are painted a golden color. That’s why, the grains from the crop are also called “golden grains”.

Recently I had the opportunity to try quinoa. The boiled product smelled of fresh grass and had a pleasant taste, a bit like the wheat cereal that is well-known to us. But to someone else it might look like and taste of a porridge made of grains of unpeeled rice.

Quinoa was first mentioned by Europeans in 1553. The book by the Spanish conquistador, Pedro Cieza de Leon, "Chronicle of Peru” (Parte Primera de la Crónicas del Perú) mentions it. It says: "Here there is a very good product, which the Indians called "quinoa". This product has leaves similar to Fat Hen, and the plant grows to about the height of a man. It produces a very small seed that can be white or colored. They make drinks from the seeds and eat them fried, as we would do rice...”

Today, quinoa has begun to be grown not only in the Andean region of South America (Bolivia, Peru , Ecuador, Chile , Colombia and Argentina), but also in the U.S., Canada, France, Great Britain, Sweden, Denmark, Italy, Australia, and some countries in Africa. In Kenya and Mali, for example, the crop has already demonstrated high yields. Initial studies have shown that quinoa can also grow in the Himalayas, in the plains of northern India, in the Sahel, Yemen and other arid regions of the world. That, at least, is what the experts of the Food and Agriculture Organization (FAO) claim, which has decided to support the proposal from the President of Bolivia.

Currently the world's main producers of quinoa are: Bolivia, Peru, Ecuador and the United States. Quinoa is also grown in Argentina, Colombia and Chile, but on a much smaller scale. In Ecuador today, for example, quinoa is grown on around 2000 hectares of land, and in 2015 it is planned to expand the planting to 10,000 hectares, which will make it an export crop.

Yet it is in Bolivia that 46 % of all quinoa grown in the world is produced. The areas of the country growing this crop are expanding rapidly, and in just the last two years have increased by 39%, reaching a historic high. Bolivia, through the efforts of its president, Evo Morales, who promotes this ancient crop wherever possible, has been made a Special Ambassador to the UN for quinoa by the FAO. In second place for quinoa production is Peru with 42 % of world production, and third, surprisingly enough, is the United States, even though North Americans tend to buy tons of these crops from South America. Perhaps, after all, they don’t have enough quinoa of their own. Also, it has become known that the American Space Center NASA used quinoa as a food for its astronauts. No wonder many countries today are increasingly repeating the Bolivian saying: "quinoa - this is the future, sown thousands of years ago."

In 2012, Bolivia exported 26,000 tons of quinoa, mainly to the United States. The Bolivians planted this crop in 96,000 hectares of fields, nearly half of which under "golden grains" are located in the region of Oruro. It was there last year that president Evo Morales took part in the planting.

It should be noted that the demand for "golden grain" is growing, and this demand is giving birth to supply. In South America, the cultivation of this crop is undertaken by about 130,000 small and medium-sized family farms. Some entrepreneurs, dealers and intermediaries are using the increasing popularity of this nutritional dietary product to sell Andean quinoa to gourmet restaurants at prices five times higher than, for example, soya. But, in fact, according to experts, a ton of "golden grains" now on average costs more than $ 3,200 and the price of this grain has a tendency to grow higher still.

The International Year of quinoa started on February 20th this year in New York, at the headquarters of the United Nations. It was announced at the explicit request of the Bolivian leader Evo Morales, due to the high nutritional value of this grain crop. It should be noted that, according to the statements of the same President of Bolivia, large multinational corporations that produce food, have made strong efforts to discourage the announcement of the International Year of Quinoa. They felt a threat to their windfall profits. But the desire of the international community to ensure food security, eradicate hunger and rescue the growing number of people on the planet from future food crises was stronger than global oligarchy.

Bolivian President Evo Morales and Peru's first lady Nadine Heredia Alarcon de Humala, in the same place at the UN were personally appointed Honorary Ambassadors for the International Year of quinoa. The first lady highlighted the role of quinoa as an "affordable and effective means to combat hunger and malnutrition." Why? Because this crop is very nutritious and can grow in almost "Spartan" conditions, on arable plots of land from sea level up to mountain plateaus situated at an altitude of 4 kilometers. Quinoa demands little water , has good resistance to disease, has no problem with poor soil and bad weather conditions, such as drought and cold weather, and according to experts can withstand temperatures of - 8 to +38 degrees Celsius. Bolivian President Evo Morales called on the governments of various countries and private producers to invest in the production of "golden grains", not for "making a profit, but to save humanity from hunger."

As part of the Year of Quinoa, the Fourth World Congress on quinoa took place in Ecuador in July. About 700 professionals and producers from Bolivia, Colombia, Ecuador, Peru, Denmark and other countries shared their experiences on the study of the medicinal and gastronomic qualities of quinoa, methods of its cultivation and consumption of the "golden grain " and a number of other lesser-known Andean grains such as amaranth, Chocho or Tarwi, ataco and canihua (el amaranto, chocho o tarwi, ataco y kañiwa). At the same time a scientific seminar was organized dedicated to agronomy, climate change and the cultivation of these crops under current conditions. It was held under the banner of "quinoa: one more ally to eradicate hunger” (“La quinua: un aliado para la erradicación del hambre”). It was attended by scientists from the United States and Costa Rica. Experts emphasize that the wealth of the chemical composition of quinoa is superior to most other grains. Thus, it contains more than twice as much protein as rice, twice that of millet and almost 6 times that of corn. Besides the unique proteins, quinoa contains carbohydrates, fats with a high content of lecithin acid, fiber, minerals and group B vitamins. Quinoa grains, moreover, are rich in phosphorus, iron, calcium and zinc.

In September and October practical science research and other events relating to quinoa were held in Bolivia itself and other countries in the Americas, Europe and Asia. Many states organized "golden grains" weeks, festivals, culinary competitions for cooking delicious quinoa dishes, and there was even an exhibition of paintings and books. Dozens of manuals and various literary works on this unique product have been published in several languages. In a few days, the Italian city of Milan will hold an International Congress on Quinoa which will be called "From the Andes to Milan, and the entire world." In November, Lima (Peru) and La Paz (Bolivia) will host culinary festivals and competitions for "The most healthy dish..."

The International Year of Quinoa will finish in December in Rome, at the FAO headquarters, where there will be a closing ceremony for the Year.

According to UN experts, the International Year of Quinoa, not only serves as an incentive for the production of "golden grains" in the world, but also shows that the problems of the modern world can be solved by calling upon the accumulated knowledge of our ancestors, and the family farms which are currently the main producers of this crop.

The launch of the Year in New York City marked the beginning of a number of cultural and scientific activities, as well as scientific research, and it is hoped that they will contribute to the well-being of thousands of small farmers and consumers around the world.

FAO experts have developed a program of activities for the whole year. It is aimed primarily at promoting quinoa and its nutritional properties. The program makes various recommendations and suggestions. For example, the Bolivians were asked to create an Agricultural Outlook Center on their soil for the production of certified quinoa seed stocks and their quality control. It was also decided to build an International Center for Quinoa Research in Bolivia, and to think about how to improve the entire chain, "from producer to consumer."

However, experts warn: do not over rely on quinoa (we all remember the excesses in Russia with crops of corn in the Soviet Union under Nikita Khrushchev!). It is necessary not only to stimulate and control the planting of quinoa, but to avoid the displacement of other important crops, such as beans, maize and rice for example, by this crop. And there are already examples of this displacement in the Andean Lake Titicaca region. "Quinoa-mania" should not disturb the balance of food crops. People in the future can’t just live on quinoa alone!

But what can we make with the "golden grains"?

Traditionally, the Indians of Bolivia roasted the grain and milled it into flour, from which different types of bread were baked. In addition, the grain was added to soups, used to make porridges and beer, and chicha, which is a traditional alcoholic drink, a kind of Andes moonshine. Some believe that in the prepared form quinoa has a nutty flavor. Most cooks think it is also good because the grains take on the taste of the meal with which it is prepared as a side dish.

Also, the flour derived from quinoa is used for the production of pasta products and soft drinks. The seeds produce a nutritious product that is close to peanut butter, and mixed with passion fruit juice turns into a thick and tasty nectar.

Today quinoa has found a place not only in gourmet kitchens, but also in the pharmaceutical and other industries.

Many South American guides report that fans of healthy food in America, in Europe, in Australia and Africa highly appreciate this grain for its beneficial properties. Quinoa has a high level of protein, but does not contain gluten, as opposed to, say wheat, and is therefore suitable for dieting. In addition, the product does not contain genetically modified organisms (GMOs), which is becoming increasingly rare today. I liked this cereal.  In cooked porridge try adding a little honey. I advise you to try it. At least in the International Year of Quinoa.