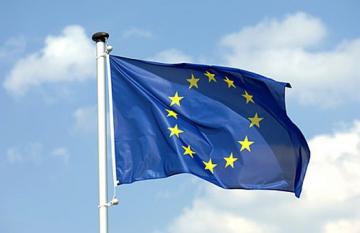 In 1974 - a year after Great Britain's joining the European Economic Community – young British author Christopher Priest published his Inverted World which portrayed the united Europe as city Earth constructed on top of great wheels and being slowly winched along railroad tracks. The aim of the motion was to reach the Optimum, a destination of supposed well-being. As the city moved past one track the section was lifted, put ahead of the city, and reused. In a structurally similar scheme, at the moment money is being extracted from Berlin and used in Athens to keep Greece going as a EU member.

In The Inverted World, the city eventually reached the shore of the ocean across which no bridge could be built and came to a halt. Its residents shut down the generator and suddenly began to see the normal world with normal people and concerns around them. The generator served to distort space and for years the residents saw the world inverted. Residents of the EU are currently passing through roughly the same experience.

On September 16, the finance minister of Greece George Papaconstantinou ruled out a restructuring of the country's national debt but warned that its default would trigger a collapse of the Eurozone. Despite reassuring statements, investors are skeptical about Greece's chances to avoid default which can seriously bleed German and French banks as well as the European Central Bank whose balance sheets are burdened with up to Euro 40 bn of Greek securities. The development can indeed become a prologue to the Eurozone demise which, as German Chancellor A. Merkel noted, would likely be tantamount to the end of the European project.

Greece is not the only voice to signal alarm in the Eurozone. University of New York economics professor Nouriel Roubini who is credited with predicting the current economic crisis years ahead of its outbreak estimates the probability of collapse of the Eurozone at 30%. He maintains that the collapse will be caused by the restructuring of sovereign debts of the weakest EU economies and by their withdrawal from the Eurozone. Roubini does state that the above is the worst-case scenario while the optimistic one is that – with great difficulty – the EU will overcome the crisis within the coming several years.

Roubini sees the same factors that will impede growth in the second half of 2010 and throughout 2011 in Germany and in other EU countries. He therefore opines that Greece is unlikely to regain solvency and a mandatory restructuring of its debt is imminent. Moreover, according to Roubini Spain and Ireland are facing essentially the same problem.

Such were the settings in which an informal EU summit convened in Brussels on September 16. The plan was to discuss the relations between the EU and its strategic partners – the US, China, India, and Russia – and to probe into opportunities to boost trade. The summit was also supposed to focus on the novel EU system of economy management occasionally described as the economic government (the idea was originally floated by French president N. Sarkozy in October, 2008).

Instead, the summit degenerated into a ferocious debate between Paris and Brussels over the deportation of Roma from France to Romania, the country of their origin.

In an attempt to capitalize on the French population's discontent at the tide of immigrants, last summer Sarkozy relaunched his customary agenda of fighting crime and illegal immigration. The campaign culminated in the roundup of numbers of Roma and their deportation to Romania with a farewell allowance of Euro 300. Formally, the French government was right – as citizens of Romania, a country outside of the Schengen zone, Roma were not entitled to stay in France indefinitely. As for Romania, Bucharest opened doors to its own flock only when Paris threatened to veto its integration into the European borderless zone. Brussels was outraged by Sarkozy's course. EU Justice Commissioner Viviane Reding (Luxembourg) said on September 14: “Discrimination on the basis of ethnic origin or race has no place in Europe. It is incompatible with the values on which the European Union is founded. National authorities who discriminate ethnic groups in the application of EU law are also violating the EU Charter of Fundamental Rights, which all Member States, including France, have signed up to”. In an unusually biting criticism, she further likened the episode to atrocities committed during World War II.

At the point, it was Sarkozy's turn to feel outraged. He said France was insulted by the statement and added that Mrs. Reding was in any case free to take the Gypsies to Luxembourg. The reply from Brussels was that Mrs. Reding expressed regrets concerning the comments over the matter but did not have in mind any parallels between the Nazi atrocities and the steps currently taken by the French government.

Italian prime minister S. Berlusconi predictably sided with N. Sarkozy. He remarked that the scope of the Roma problem was not limited to France but spanned across Europe and that – in contrast to the majority of Europeans – the French president was aware of the fact. Berlusconi also said he hoped the synchronism between the French and the Italian positions would help to wake up Europe.

It sure woke up Europe. Bulgarian prime minister Boyko Borisov told shortly after the summit about an angry lunchtime exchange between French president N. Sarkozy and European Commission president José Manuel Barroso who said the discrimination of Roma in France was unacceptable and stressed that respect for human rights is the core EU value. Luxembourg's prime minister Jean-Claude Juncker joined the chorus of Sarkozy's critics by saying the French president's statements were malevolent.

Perhaps the row at the Brussels summit came as a shock to the European diplomacy, but Sarkozy stood firm and declared that - to ensure public order in France - Paris would go on deporting Roma and eliminating all illegal camps.

As for Mrs. Reding, Sarkozy even avoided calling her by name while replying. Instead, he said “the woman” had insulted France by criticizing the crackdown on Roma and demanded official apologies from the Commission. No apologies followed, and evidently Paris will go on deporting Roma against the backdrop of Brussels's human rights advocacy. It should be noted that not only S. Berlusconi, but also Czech prime minister Petr Nečas for whom his own country's Roma had become a permanent headache expressed support for Sarkozy.

Like many other countries, Germany also hosts Roma camps. Sarkozy mentioned A. Merkel's indicating that Germany also planned to get rid of them, but the claim was officially disavowed by Berlin.

Anyhow, Europe cannot simply pretend that the Roma problem does not exist. European Council president Herman Van Rompuy managed to convince the forum to pass a five-point declaration saying that the Roma theme would be discussed duly at one of the coming EU summits this year, and that put the final dot in the story. The September 16 EU summit failed to address the economic issues which were supposed to top its list of priorities, as if the Roma problem was the most pressing one the EU was confronted with. Isn't that altogether an inverted world?

No doubt, Europe's Roma problem is not a simple one. In the mid-1990ies I happened to walk across a Roma neighborhood in Trebišov, a small town in the eastern part of Slovakia. While the concrete apartment blocks around me were standard, the scenery left a distinctly strange impression. The entrance doors of apartment blocks were flung open or absent, window panes and, occasionally, window frames were missing. I saw the head of a horse in the second floor window, and Roma were cooking food on fire lit on a metallic panel in a ground floor apartment. It was clear that no efforts were ever made to integrate the people into civilized society, and this seems to be equally true in the case of Slovakia and in those of France and other leading EU countries.

By all means, separate Roma statehood is not a possibility and the perpetually unwelcome people will go on roaming around various countries. I met Roma in Africa and in New Zealand, and will not be surprised to hear that, for example, they have reached Tahiti. Clearly, taking some kind of care of Roma is imperative. In the past Roma used to sell horses or work as smiths. These days they might be dealing cars or running automobile repair shops. Perhaps that is what Europe could be arranging for instead of deporting Roma? Talking about human rights makes no sense given that the rights in no way help the homeless impoverished people. Some kind of economic assistance should go first. To that end, however, the EU should find a way of dragging its economies out of crisis and distributing economic benefits fairly within its societies. After that, the inverted world will likely revert to normalcy, for Roma and for everybody else.