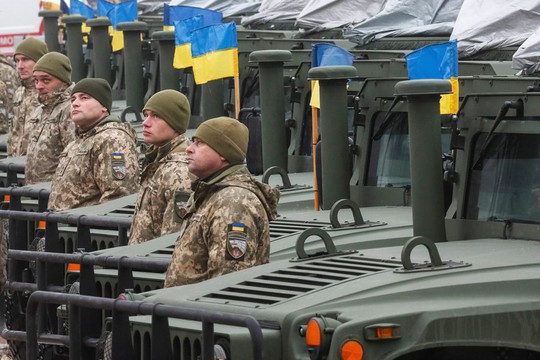 Almost fifty countries have decided to evacuate their citizens and diplomatic missions from Ukraine. Some governments did not take such drastic steps, but they still moved their diplomatic staff from Kiev to Lvov in western Ukraine. British and American military specialists have also packed up and left. Not to be left behind, Russia too decided to withdraw its diplomatic personnel and specialists from Ukraine. There is a whole bunch of charter flights preparing to take off from the country’s main Borispol airport in Kiev to take out business tycoons and politicians who have something to lose in the event of martial law or a real Russian invasion.

The OSCE observation mission is no exception. Until recently, they had been providing objective information about what was going on along the point of contact between Ukraine and the so-called Donetsk and Lugansk People's Republics. With the mission now gone, the European community will have no evidence of war crimes and violations of international law, including human rights violations, in the event of a real invasion and full-scale offensive operation by Russia.

The absence of international oversight looks like an invitation to war, pushing the participants in the conflict to implement the scenario of a real, all-stops-out war. Russia can justify the Western expectations and send in its troops. Ukraine too can take the first step and try to regain the occupied territories of Donetsk and Lugansk regions.

WHO WILL BE THE FIRST?

Ukraine and Russia have repeatedly declared their commitment to complying with the Minsk agreements, which establish the status quo in the region. President Putin has turned down a parliamentary appeal to recognize the DPR and LPR in another attempt to demonstrate to the West his desire to comply with the Minsk accords and maintain the peace. Simultaneously, the Russian military began to pull out from the border areas and wrapped up its exercises as a sign of confirmation of Moscow's official position.

The very next day, however, strange things started happening in eastern Ukraine with eyewitnesses reporting a spike in military activity. While earlier, the conflicting sides had limited themselves to just a single shelling of enemy positions a day, this time round, shelling became systemic and happened on an hourly basis.

Explosions are mostly heard coming from the territory of the Donetsk People's Republic, meaning that it is the DPR that is the target and not the other way round. Meanwhile, Ukraine’s Defense Minister Oleksiy Reznikov says that nothing is really happening along the disengagement line between Ukraine and the temporarily occupied territories, and the situation is under the full control of the Ukrainian armed forces. At the same time, Moscow is taking its time making no comments and withdrawing its troops from the border areas, which is confirmed by Ukrainian intelligence that Reznik relies on.

Who is shelling the positions of the DPR then? Are the people of Donbass blowing themselves up with their own shells? This means that someone is no longer complying with the Minsk agreements, and we have an invisible war going on, albeit with real civilian casualties.

Meanwhile, military expert Eduard Basurin published a list of violations of the Minsk agreements by Ukraine. This includes a February 11, 2022 explosion in Donetsk, and mortar shelling that happened near the village of Zinchenko on the night of February 15. This information has also been confirmed by local residents, who wrote on social networks that they saw Ukrainian soldiers setting up mortar positions outside the village, and, shortly afterwards, shelling began.

Over the past month, Ukraine has received significant amounts of lethal weapons from Britain and the US, which were supposed to be put to use in the event of a possible aggression by Russia. However, Ukraine has stockpiles of chemical weapons left over from the Soviet Union, and which it could theoretically use in the event of a major conflict. Information about Ukraine’s failure to destroy Soviet chemical weapons has repeatedly been published, including by Ukrainian media outlets. Sixteen shells with hydrocyanic acid found in the Chernivtsi region is just one example of this.

All this attests to the increased strength of the Ukrainian army, which now has a chance to recapture the territory of the Donetsk and Lugansk People’s Republics. Indeed, President Zelensky made the return of Donetsk, Lugansk and Crimea the cornerstone of his electoral program. However, even if Kiev  goes to war in a bid to restore the country’s territorial integrity, this would not relieve it of its obligations to comply with the Minsk accords, which are the only legal mechanism for ending the conflict. Moreover, during his recent meetings with French President Emmanuel Macron and German Chancellor Olaf Scholz, as well as telephone linkups with US President Joe Biden, Zelensky reiterated Kiev’s official promise to comply with the terms of the Minsk agreements.

With no independent assessment of the situation by the OSCE observation mission, representatives of Ukraine and the unrecognized republics are testing the boundaries of just how far they can go in this invisible conflict, which is holding so many ordinary people hostage.