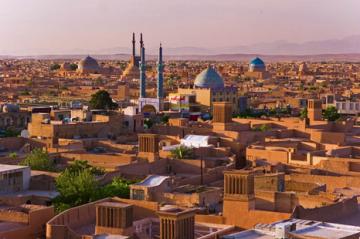 On August 21, 2010, a long awaited launch of the first unit of Iran's first nuclear power plant Bushehr was held. The first stage of Iran’s peaceful nuclear program has been completed and we can congratulate the Iranian people with such a significant achievement.

In early 1971 the Shah approved plans to turn Iran into the world’s fifth leading industrial power by 2000. In particular the plan envisaged the purchase and the launch of 20-25 nuclear reactors which would function using only imported uranium.

In 1974, Iran with the help of the US, Germany (then-Western Germany), France and Great Britain reached an agreement for the construction of two nuclear plants in Bushehr (Fars province), and two plants in Darhovin in the area of the city of Ahvaz (Khuzestan province). However it was only Germany’s Kraftwerk Union A.G. (Siemens/KWU) company, which started the construction of two units each with the capacity of 1,300 MW for the nuclear power plant in Bushehr.

Considering that the Western countries including the US were against the production of nuclear fuel in Iran, it was agreed to grant France’s Nuclear Energy Agency a $1 billion loan for 15 years in exchange for 10% of the output by the uranium enrichment plant which was under construction in the valley of the Rhone River.

In spring and summer of 1988, during the Iranian-Iraqi war the plant was seriously damaged by the bombings. In 1991-1992 Iranians restored the building and to removed the damaged equipment. However under the pressure of the US the Western countries refused to continue nuclear cooperation with Iran.

On August 25, 1992, a Russian-Iranian intergovernmental agreement on building a nuclear power plant in Iran was signed. It took 18 years to achieve the first significant result. This is not only a big victory of the Islamic republic of Iran but also a good lesson to learn for the Iranian government. The experience showed that the work on new technologies excludes any “whipping” of the technological process and should not depend on the current political situation.

Speaking at the opening ceremony of Bushehr plant head of Russian nuclear agency Rosatom Sergey Kirienko said that the Bushehr plant was a unique project because the engineers had managed to build the plant using the old ground work and even to keep some of its basic equipment installed by the German company more than 30 years ago. “Considering 36 years of expectations the launch of the plant in Bushehr is symbolic for the Iranian people”. Kirienko said.

Right after the ceremony on August 21, head of Russia’s Atomstoyexport Dan Belenky and head of Iran’s Nuclear Power Production and Development Mahmoud Ahmadyya signed a memorandum to establish a joint venture which will operate the Bushehr plant. Russia plans to take part in the joint venture on parity basis for not more than 2-3 years.

The prospects of further Russian-Iranian cooperation have not been defined yet. According to Ali Akbar Salehi, Vice President of Iran and head of Iran's Atomic Energy Organization, everything will depend on the decisions made by the president and the governmenti.

The reaction of the leading nations was predictably low-key. Firstly, the launch of a nuclear plant is an ordinary thing for developed countries. Secondly, all important issues had been agreed in advance.

As for the US it sees no "proliferation risk" from the launch of Iran's first nuclear power plant. According to U.S. State Department spokesman Darby Holladay, “Russia's support for Bushehr underscores that Iran does not need an indigenous enrichment capability if its intentions are purely peaceful".

However he added that this statement does not remove the global community’s concern with Iran’s nuclear plans, especially domestic uranium enrichment. Holladay stressed that the US and other permanent members of the UN Security Council (Great Britain, China, France and Russia) and also Germany (which is not a permanent member) approved the model under which nuclear fuel is supplied to Iran from Russiaii.

Following the launch of the first unit of the Bushehr plant Berlin urged Teheran to abandon plans to enrich uranium on its territoryiii.

Israel’s Foreign Minister said that the launch of the Bushehr plant was absolutely unacceptable and urged the global community to make more pressure on Teheran to stop uranium enrichment process. According to Tel-Aviv’s statement, as a nuclear power Iran will pose threat to Israel’s existenceiv.

According to Russia’s Foreign Ministry, the launch of the Bushehr plant shows that Iran could only profit from the international nuclear cooperation if it takes concrete steps to ground an exclusively peaceful character of its nuclear programv.

Until the last moment the Western mass media continued speculations on possible military attack on Iran’s nuclear objects by the US and/or Israel. The launch of the Bushehr plant on Augsut 21 in fact put an end to this discussion. The threat of Chernobyl disaster’s repetition can chill even very hotheaded people. On August 17 Iran’s Foreign Ministry spokesman Ramin Mehmanparast said that “attacking an international plant is an international crime as the consequences will not be limited to the hosting country but will have a global aftermath”vi. Now we can expect the US to start working on more complicated scenarios of its blitzkrieg in Asia.

May be this was the reason why at their meeting in Ankara the shareholders of the Nabucco gas pipeline project decided not to build an additional branch to Iran. The decision was made even before the launch of the Bushehr plant. Initially the project envisaged gas supplies from Iran’s gas deposit in the Persian Gulfvii. The Islamic republic of Iran remains “beyond the red line” for Washington.

The Iranian government has no doubts about the future of the Islamic revolution but the situation is not that simple. The Islamic republic is still one step away from the US’ Desert Storm aimed at the liquidation of one of the leading Islamic states.

It is not a coincidence that the ceremony of the opening of the plant was held on August 21. On August 22, Iran’s President Mahmoud Ahmadinejad personally presented first Iranian drone Karar («Striker»). “This jet heralds death for enemies and is the messenger of salvation and dignity for humanity”, Iran’s president said viii. Karar was the nickname of Imam Ali, the first Shiite imam who died as a mortar fighting for justice.

The same day together with its military readiness Iran demonstrated its determination to change the international situation by means of creating “an alternative world system”.

On August 22, 2010, addressing the parliament and the government the Iranian president said that Iran had established special relations with at least 40 countries in banking and insurance sectors, import and export sectors. He urged for the government to take an advantage of the situation to create the new world order and to make Iran independent from the capitalistic world. The first move here will be full economic self sufficiency, he said ix.