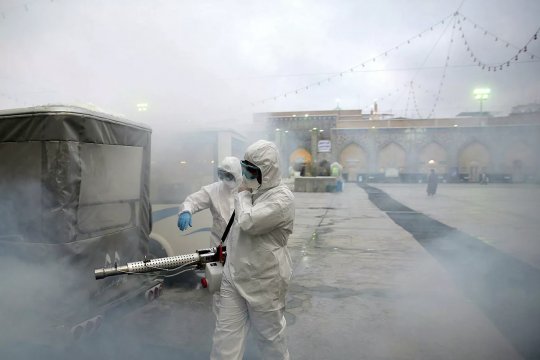 The Covid-19 pandemic has covered 183 countries, afflicting more than 1.2 million people, killing more than 70 thousand and causing moral, psychological and material damage to almost all of humanity. Surprisingly, the coronavirus hit the developed countries the most. Although, it is possible that the tragic statistics on the number of infected and on the number of dead in these countries are the result of more accurate diagnosis of the disease.

Covid-19 has struck at different countries with different socio-political and financial and economic problems making these problems worse to an extent that they sent countries into crisis.

This fully applies to the United States and the Islamic Republic of Iran (IRI), which occupy the first and seventh places, respectively, in the number of people afflicted.

In Iran, coronavirus has aggravated the far from cloudless economic situation. The economic downturn, caused by poor management, tough US sanctions and a dramatic decline in global oil prices, had a negative effect on Iranians’ wellbeing, triggering a lot of discontent. According to the World Bank, recession during the Iranian year (03/21/19 - 03/20/20) may reach - minus 8.7% of GDP. Inflation is at 35.1%. Food prices in the past year have increased by 40%, commodity prices - by 28 - 40%. These are figures to be reckoned with.

Although the country’s leadership is fully aware of this, the ruling elite is clearly in a state of shock at the countless problems that have amassed, the main one being the coronavirus. Besides, the ruling elite is divided into “moderates” and “radicals”, each group having their own vision of a solution to these problems and of the future of the country as a whole. Covid-19, like a catalyst in chemical reactions, has made all the sore points more pronounced.

The appeal to Iranian people to join forces in the face of the coronavirus epidemic - which repeatedly came from the Ayatollahs - did not yield fruit. The Iranians who boycotted the elections to the Majlis on February 21 ( 57.4% of all voters) demonstrated their attitude to both "moderates" and "radicals." They accuse the authorities of creating these problems (whether consciously or unconsciously no longer matters), of being unable to resolve them rationally, and finally, of the unprecedented Covid-19 attack on Iran. Mortality, that is, the percentage of deaths of the total number of those diagnosed with coronavirus, has amounted to nearly 6.4% (a seasonal flu has a mortality of 0.1% to 0.5%). Thus, the Iranians have lost much of their trust in the authorities.

An unbiased analysis of the situation in Iran demonstrates that the state system of deterrents and offsets, which was developed in previous years and which guaranteed stability for decades, is now cracking. The pervasive crisis that has covered Islamic Iran has both internal and external causes. The latter is attributed to the United States, which has been pursuing the policy of exerting "maximum pressure" on Iran.

The response policy of "maximum resistance", announced by the Supreme Leader Ayatollah Khamenei, may be justified but is unlikely to become effective in the current financial, economic and socio-political conditions in Iran.

The Covid-19 pandemic has thrown global policy and economy into chaos. What  was relevant and important a couple of months ago has faded into the background. Last December and January marked the peak of the Iran-US confrontation. Now,  the situation has changed, dictating new approaches and new solutions.

Coronavirus is attacking Iran at a critical time for the country. Perhaps, it is this emergency situation, both for the IRI (almost 4 thousand dead) and for the USA (almost 9.5 thousand dead), when they are faced with a common deadly enemy, that must encourage them to bridge their differences, at least for the time being.

Covid-19 has made all Iranian problems worse, has revealed weaknesses in national health care and has covered the future of the Islamic Republic with a cloud of uncertainty and unpredictability.

Meanwhile, the United States, the victim of pandemic number 1, was finally able to see that the strategy of "maximum pressure" on Iran has failed. Trump did not manage to force the Iranians to sit at the negotiating table, nor did he manage to get them to change the regime or even soften it.

Even before Covid-19, the Iran-USA confrontation hit a stalemate: Tehran will not force Trump to reconsider its anti-Iranian strategy, Washington will not force Ayatollah Khamenei and the country's leadership to comply with American requirements.

What is needed given the situation is a new "coronavirus diplomacy" which could focus on the so-called "small things". The effects of these “small things” for tens, hundreds and thousands of people are far from small.

Iran could release all foreign nationals and people with dual citizenship from places of detention, suspend the process of phased non-compliance with the requirements of the nuclear deal (Joint Comprehensive Action Plan - JCPOA), and cut down on its military operations in the Middle East, especially in Iraq, Syria, Yemen.

The United States could take steps to reduce the scope of its inhumane measures and, as a result, ease the consequences of the Covid-19 pandemic for Iran. Of course, the reality is that President Trump, unfortunately, will not abolish anti-Iranian sanctions, in the  first place, because of the upcoming presidential election in the United States and because of the political philosophy of Trump. However, there is a number of measures that Washington can take:

To expand and determine the range of humanitarian (medical, food) products for Iran.

To give it to understand that not a single deal on these products with Iran will come under sanctions.

To assist the World Health Organization and the Red Cross in providing the logistics and delivery of these goods to Iran.

Not to prevent the opening of frozen Iranian accounts in foreign banks for the purchase of humanitarian supplies. If necessary, to carry out all transactions through Switzerland to ensure that it is used solely for the purchase of medicines, medical equipment and essential food products.

Not to obstruct the request of the Central Bank of Iran to the IMF for a $ 5 billion loan. After all, this money can go through Swiss channels.

Of course, these are options for mutual measures alone which, although do nothing  to solve the Iranian-American conflict, could nevertheless create the possibility of unblocking diplomacy in the face of a dangerous disease for future post-pandemic contacts.

Unfortunately, these are all but good wishes. It would be desirable to see them through, but how realistic is it?

According to media reports, tensions between Iran and the United States regarding Iraq have been building up in recent days. Thus, Iran-backed Iraqi groups Kataib Hezbollah, Hashd al-Shaabi, Asbat al-Tiran and others have announced readiness to continue attacks on US military facilities until the Americans leave Iraq.

Donald Trump was quick to retort that Iran, as the initiator of such attacks, would pay a high price for attacking the US military in Iraq and that the US would strike back at Iranian forces.

According to The New York Times (03/27/2020), the Pentagon ordered the Central Command of the US Armed Forces (CENTCOM) to design a plan to eliminate local pro-Iranian militias in case of attacks on the US military in Iraq. Under a secret instruction, the IRGC troops may also become the target of possible US attacks in case they find themselves in close proximity to Shiite militants.

Simultaneously, the Americans have been strengthening air defenses in Iraq. After a series of intensive consultations with Iraqis, they began deploying Patriot missile defense systems in Iraq. One of the deployment locations is the Ain al-Assad base in western Iraq, which came under an attack from Iran earlier this year. One battery has arrived at the Harir base in Erbil, the capital of Iraqi Kurdistan, while two more Patriot batteries are being transferred from Kuwait to Iraq.

In its statement of  April 1 the Iranian Foreign Ministry said that US operations in Iraq would lead to "catastrophic consequences" for the Americans in the first place. Tehran went further than statements. The country’s air defense forces and the IRGC missile forces were put on alert. The Iranian military command deployed dozens of anti-aircraft missile systems and coastal missile systems along the entire coastline of the Hormuz Strait, threatening to block the passage of any ships through the Strait of Hormuz. This usual tactic, carried out by Iran several times over the past decade, has repeatedly led to an accute aggravation of the situation around Iran and in the Persian Gulf.

It looks like even in the conditions of the Covid-19 pandemic, Tehran and Washington cannot give up on their phobias and mutual hatred.

What is encouraging is that both capitals have no consensus as to the issue of using force to settle the Iranian-American conflict. In particular, as The New York Times reports, Pentagon chief Mark Esper and the head of the Joint Chiefs of Staff of the US Armed Forces, Mark Milli, adhere to a cautious approach, fearing further destabilization in the Middle East. Nevertheless, Esper has ordered his staff to devise a strategy in case of escalation of attacks against the US military in Iraq.

According to Radio Farda (04/04/2020), one of the most influential Iranian politicians, deputy of the Majlis (parliament) of the Islamic Republic of Iran, Heshmatollah Falahatpisheh, who advocates radical conservative views, said that Iran and America were close to war. However, such a war will become “unfair” on both sides. At the end of December, H. Falahatpisheh called on the Iranian military and political leadership to "keep away from a conflict with the United States in Iraq."

That Iran-US relations have reached a critical point is obvious. But crisis in Greek means a turning point, a condition under which the existing means of achieving goals become inadequate but there emerge new opportunities. Maybe, this moment has come!? Let's hope that amid the global onslaught of coronavirus reason and pragmatism will prevail, opening new opportunities for dialogue and will thereby lead  Iran and the United States to soften their approach in relation to each other.