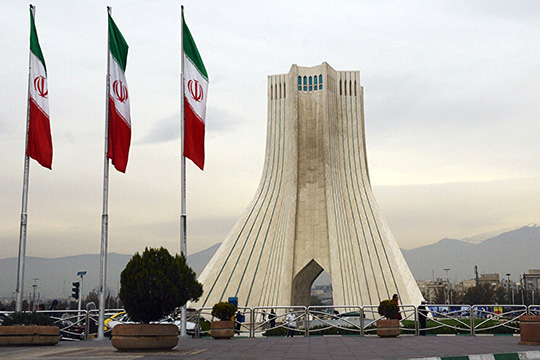 Despite all the complexity and ambiguity of the situation now exiting in the world, the summer and fall of 2019 saw a certain degree of success, achieved by Iran’s Middle East policy both in the region and inside the country itself.

Tehran’s foreign policy achievements have also helped strengthen the “Shiite belt” spanning Iraq, Syria and Lebanon, where Tehran’s influence remains very strong. However, the events of the past few weeks have shown that this belt is starting to “snap.”

Iraqis have for more than a month been holding rallies against the authorities, accusing the government of corruption and demanding the resignation of Prime Minister Adil Abdul-Mahdi. Many are chanting anti-Iranian slogans, because they believe that the government is getting a great deal of support from Tehran. In Karbala, considered a holy city for Shi'ite Muslims, protesters set ablaze the Iranian consulate, crying "Iran, go away!" in a violent flare-up that left more than 300 people dead.  The Iraqis blamed the killings down on members of the pro-Iranian militia. [2]

The picture in neighboring Lebanon is much the same with the Lebanese actively protesting not only against corruption and low living standards, but also against the Iranian influence in the country, namely the Hezbollah, an Iranian creation, which plays an important role in Lebanon. According to observers, it is against this backdrop of anti-Iranian sentiment that Hezbollah has gradually been losing control of the situation there. [3]

In Syria - this main link of the Shiite arc – the situation is equally alarming for Tehran, but this is a separate story that deserves a separate analysis.

What makes the situation so noteworthy though is that Iran is in various degrees influencing the domestic political situation in all these three Arab countries, with Iraq, Lebanon, and especially Syria each being an Iranian enclave in the Arab world.

However, it is precisely in these countries that initial “shocks” - the harbingers of serious upheavals for Iranian politics in this region – are being felt now. Moreover, these shocks dangerously resonate with the political situation in Iran proper, which has seen a recent wave of mass protests flaring up on November 15, 2019, sparked by an increase in gasoline prices.

Over the 40 years of its existence, the Islamic Republic of Iran has seen a number of social disturbances, but they were usually of a local nature, caused by local problems and limited to rallies and strikes at individual enterprises. However, in the last decade, waves of mass discontent, already on a national scope, have risen repeatedly.

The first nationwide anti-government protests in post-revolutionary Iran happened in 2009, caused by alleged voting fraud and irregularities in presidential elections that resulted in a surprise win for Mahmoud Ahmadinejad. Those protests are known as the Green Revolution.

The protests took place in several major Iranian cities, with middle-aged people, representatives of the intellectual elite and political opposition predominantly taking to the streets. At the height of the tensions, hundreds of thousands of people gathered in the streets and squares of the relatively liberal Tehran, where the protests originated. The sole demand was to cancel the results of the 2009 presidential election, won by Ahmadinejad.  Presidential hopefuls Mehdi Karrubi and Mir-Hossein Mousavi formally spearheaded the protests which, heated as they were, still remained within the framework of the political system of the Islamic Republic.

A distinctive feature of those protests was that Iranians used social networks not only to coordinate their actions, but also to let the rest of the world know what was going on in their country.

The second powerful wave of protests rocked Iran in late 2017 - early 2018, this time caused by a spike in food prices. The protests flared up in one of Iran’s most conservative cities – Mashhad - and almost simultaneously in more than 50 cities and numerous villages (where people traditionally support the government), and were much bigger in scope than the previous ones. Most of the protesters were young people with the rallies attended by representatives of various social and political backgrounds. What started as a purely economic protest, quickly acquired a political nature directed against the country's leadership. The fundamental difference that set the second wave of protests apart from the previous one is that the protesters demanded a reform of the country political system and even the elimination of the principles of the Islamic Republic. The Iranian protest was rather chaotic too. as there were no single leaders and common demands being made to the powers-that-be. Another important feature of those events was that at a certain stage all Internet access was blocked. While in 2009 there were around 1 million Internet users in Iran, in 2017-2018 their number had jumped to 48 million, and this is in a country of 82 million people! The list of those detained during those protests included the country’s ex-president Mahmoud Ahmadinejad.

On November 15, 2019, Iran encountered a third wave of civil protests after the government of Hassan Rouhani announced that it was raising gasoline prices by as much as 200 percent.

Protests against this decision engulfed the entire nation, flaring up in Tehran and then spreading to about 100 towns and villages elsewhere in the country, involving more than 100,000 people. Maybe not much for a country of 82 million, as previous protests were much bigger in scope, but certainly more radical. In a number of places, more than 100 bank offices, including those of the Central Bank, were set on fire, and 900 branches and 3,000 ATMs were damaged. [4]

The protesters also want Tehran to stop sponsoring Islamic movements abroad because they believe that it is exactly where the money from the gasoline price hikes will go, instead of helping the poor. “Not Gaza and not Lebanon - I sacrifice my life for Iran,” protesters chanted. [7] Another demand is to change the country’s foreign policy, which, according to the protesters, is turning Iran into a rogue country, suffering under heavy economic sanctions. [8]

Iran’s leaders put the blame for the social unrest on a mix of enemies, including the United States, Saudi Arabia and Israel, as well as groups like the People’s Mujahedin of Iran, the Kurdistan Free Life Party, the Islamic State (banned in Russia), and now also the clan of the ousted Shah Mohammad Reza Pahlavi and, above all, his son - heir to the throne Reza Cyrus Pahlavi.

I believe that although the countries opposed to the Islamic Republic of Iran, did of course provide moral and media support for the civil protest against the existing regime, they could still hardly be able to organize such anti-government rallies inside the country. As for Reza Cyrus Pahlavi, living in the United States, he often makes political forecasts and comments, but always avoids political activity. He has no ambitions to restore the monarchy, saying only that he would like to see Iran without theocracy. [9] The current protests in Iran apparently stem from domestic, primarily social and economic, problems.

Economic background of the crisis

On November 15, the Iranian government announced an increase in retail gasoline prices. While motorists were previously allowed to buy 250 liters of fuel per month at a price of 10,000 rials (19.14 rubles), now they have to pay 15,000 rials (28.71 rubles) with the fuel quota reduced to 60 liters (up to 400 liters for taxi drivers). Iranians are now supposed to pay 30,000 rials (57.42 rubles) for every additional liter in excess of the quota at a price of 30 thousand rials (57.42 rubles). This is exactly what triggered much of the mass-scale protests.

Here are the three main points that need to be highlighted and emphasized:

First, Iran's economy is in a very bad state now. And not only because of the US sanctions. According to Gholamhossein Shafei, President of Iran’s Chamber of Commerce, Industries, Mines & Agriculture (ICCIMA), the Iranian economy suffers from two key problems: corruption and stagnation ... [10] Economists describe stagnation as a derivative of an ineffective  management, lack of financial discipline, and exhaustion of the existing model as a whole. According to some experts, this could eventually ruin the country’s entire political system. [11]

Second, the aggressive financial and economic sanctions imposed on the Islamic Republic by the United States have cost the country tens of billions of dollars and contributed to its economic woes.

According to the IMF, as a result of a combination of multiple factors, Iran’s GDP this year is projected to decrease by 9.5 percent – the worst indicator since 1984. Annual inflation will exceed 35 percent [12] (according to other sources, it could climb to 52 percent). [13]) Food prices are up almost 60 percent, and price increases for many non-food products exceed 80 percent. [14]

Since January, the national currency, the rial, has lost 70 percent of its value against the US dollar. People and businesses have turned to the black market for currency and, as a result, the rial’s exchange rate finally detached from the official one. When the rial’s fixed exchange rate was introduced in April 2018, one US dollar bought about 60,000 rials. By July, the unofficial rate had jumped to 112,000 thousand rials, and by early September - to 145,000 rials. A year later, the “street” rate rebounded a bit to about 115,000 rials for one US dollar, but the gap with the official exchange rate, frozen at 42,000 rials per dollar, remains huge nonetheless.

Overall, the damage inflicted on the Iranian economy by the new US sanctions and the sixth-month devaluation-inflation spiral was officially estimated at 4.9 percent of the country's GDP. [15]

Meanwhile, employers are massively switching to short-term contracts, which adds to the sense of anxiety among the people. [16]

According to the Statistical Center of Iran, a government agency controlled by the country's president, the official unemployment rate in 2018 reached 27 percent among young Iranians, and 40 percent among university graduates. [17]

Third, under the circumstances, the government had no other choice than to jack up fuel prices, because even though the IMF hadn’t discussed such a raise with the Iranian authorities, it had still advised Tehran to cut fuel subsidies [18], which means raising fuel prices. According to the Iranian government, fuel subsidies cost the state $2.5 billion a year and are an incentive for smuggling.

So, according to a report by the Iranian parliament’s research center, as a result of the economic downturn, caused by multiple reasons, objective and subjective, as well as external and internal, the living standards of the Iranian people keep falling. [19]

Amid last month’s social unrest, on November 18, the Iranian government, in an effort to reduce tensions, announced additional payments to the poorest segments of the population, hit the hardest by the rising gasoline prices. They were promised up to 2 million riyals in the first week, followed by subsidies to be provided on a monthly basis. By the end of the first week of protests, the government had managed to somewhat dampen the tensions and restore a semblance of normalcy.

While analyzing the current situation in Iran, we should single out the following points: