Iraq War from a Historical Perspective 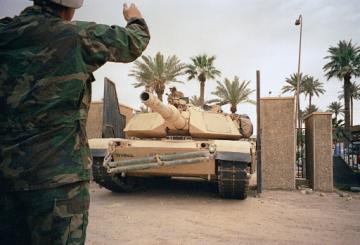 In accord with the withdrawal timetable rolled out back in 2008, B. Obama ordered the pullout of the majority of the US forces from Iraq. The plan is that only some 50,000 US servicemen will stay to train the Iraqi army and security services. Now comes the time to assess the campaign that took seven years, the gains drawn from it by the US, and the repercussions it had globally.

US President F. Roosevelt's notorious remark concerning a Nicaraguan dictator - “Somoza may be a son of a bitch, but he's our son of a bitch” - epitomizes the political philosophy that guides the endeavors of Washington to promote democracy and its choice of partners among country leaders. It is an open secret that there was an epoch when S. Hussein used to be “our son of a bitch” to the US, and it was his falling out of favor with his former patrons rather than any sins he might be guilty of that he eventually paid for with his life. Washington simply decided to help the US business solve some of its strategic problems by punishing the defiant Iraqi leader who sat on vast oil reserves.

The widely disseminated myths that Iraq maintained WMD stockpiles and that Baghdad had links with Al Qaeda provided a pretext for the invasion of Iraq. No evidence of WMD production or Iraq's ties with Al Qaeda – least with the terrorists responsible for the September, 2001 attacks on the US – was ever unearthed, and the fact was recognized not only by the international community but also by B. Obama, the US President. Still, the Iraq War helped Washington accomplish several significant objectives. First, in 2003 the US needed to rebuild cohesion in the ranks of NATO as – no longer facing serious challenges in Europe - the alliance clearly lacked a sense of mission. Secondly, Washington was preoccupied with strengthening the Euro-Atlantic solidarity and its own leadership at the face of rapid Eurointegration. Thirdly, the Iraqi campaign was meant to reassert the US dominance in the Middle East. Fourthly, G. Bush's Administration always had in mind the interests of US companies like Halliburton which featured prominently on the career records of some of the Administration's key figures. Fifthly, the war justified the Pentagon's growing appetites (at the moment the US defense budget exceeds those of the world's next 10 countries with the biggest military budgets combined and equals roughly five defense totals of China, which ranks second globally in terms of the total defense spending). Sixthly, the Iraqi oil reserves confronted Washington with an irresistible temptation.

For a period of time, the Iraqi campaign indeed kept Washington's allies united. The demonstration of the US military might in Iraq was convincing, which, however, did not spare the US new challenges in Afghanistan. The “fragile democracy” instituted by Washington in Iraq stays afloat largely due to the continuing presence of the coalition forces in the country. S. Hussein was displaced, but the urgency of his trial and execution bred suspicions that the actual purpose was to silence him.

Iraq sank into chaos as a result of the invasion. The intricate balance between Iraq's various political, religious, and ethnic factions – most importantly, between the Sunni and the Shia Muslims and between the Iraqis and the Kurds - was blown and its own security system – destroyed, leaving the country defenseless against various subversive groups. Up-to-date Iraq has no government exercising authority uniformly across the country. Violence in Iraq is on the rise, and Al Qaeda is easily penetrating Iraq, attacking various targets including NATO installations, and recruiting Iraqis. Iraq's economy with its once prosperous oil sector in part lies in ruins and in part – has regressed to its 1970ies state. The damage suffered by the Iraqi economy over the war years is estimated at up to $100 bn.

Estimates of the death toll in Iraq due to the war, terrorist attacks, and the overall chaos are in the 900,000 – 1,100,000 bracket. The figures supplied by the World Health Organization and reflecting only documented cases range from 104,000 to 223,000. Iraq's infrastructures – bridges, expressways, railroads, aerodromes, docks, and electric grids – are largely devastated. As for the Iraqi people's moral damages, those evade assessment.

The international coalition also paid a high price for the Iraqi campaign. The US lost 4,377 people, plus 31,620 were wounded. The US allies lost 317 people, 179 of them – British. In the respective societies, the losses echoed with widespread resentment against the war and a feeling that the objectives behind it had never been explained.

The US-led invasion of Iraq did not make the world safer. Paradoxically, the US campaign which had the stated goal of destroying Iraq's WMD arsenals forced Iran to boost its nuclear program. These days, Iranians tend to believe that the US would have never attacked Iraq if it possessed a nuclear deterrent. The leadership in N. Korea also realized that nothing less than a nuclear status can guarantee the country against US aggression.

Historical and moral assessments of the Iraq War are on the horizon. The lesson the world must learn is that intervening in domestic affairs of sovereign countries is not an option. Nothing can make Iraqis live the American way, and – in Iraq or any other country – the people are entitled to decide on their own future. The basic truth is that a regime established by foreign forces cannot be stable and will never be regarded as legitimate by the population.

It did not take the US, Great Britain, and other coalition countries serious efforts to rout S. Hussein's army, but in the longer run they have lost the battle over the hearts and minds of the Iraqi people and many other Middle East's nations.