Iraqi Kurdistan: “a step forward, then two steps back” 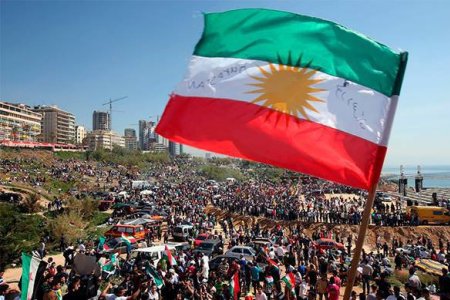 The first result of the Iraqi Kurdistan independence referendum was seizure of the disputed territories and even a part of the autonomous district by the Hashd al-Shaabi controlled by Iran and the regular Iraqi army. Incidentally, the bone of contemption of it, the Kirkuk oil-exploration region, was left by the Kurds short of war. Small skirmishes continued along the contact line for 11 days, with over 100 000 Christians, Yezidis and Sunnis were forced out of their homes by the fear of repressions.
Then Iraqi Prime minister Haider al-Abadi declared a ceasefire for 24 hours. Almost at once is was prolonged “until further agreement” — nobody wants war. Baghdad even declared that the conflicting parties created a “military committee to start political talks” and that soon they will start paying salaries to the employees (including the military!) of the Iraqi Kurdistan from the central budget.
In this situation, Masoud Barzani, the Iraqi Kurdistan President, said he would leave his position, trying to share, based on opinion of a number of observers, the responsibility for the independence-reaching project with other Kurdish politicians, saying that Kirkuk was “a stab in the back” and “the great betrayal”. His exalted accomplices attacked the parliament of the autonomy protesting against allegedly collaborationist status of the opposition from the Partiotic Union of Kurdistan (PUK), Komali islami and Gorran parties who Barzani accused of factual betrayal of the “Kurdish common goal”. In some districts, the headquarters of these organizations were slammed and burnt.
Now many Kurdish activists blame Barzani of the fact that he wants to prolong his period in power and become a part of history by means of this referendum. All this is despite the fact that he openly declared the day before the vote that neither he, nor his relatives will participate in the presidential election in November 2017. However, we know that in the East the power is not succeeded, it may only be lost. Barzani must have thought that after the positive referendum result (an no one doubted that success) the people will ask their leader to head the now sovereign Kurdistan. All was over in a national disgrace and, possibly, final loss of personal power. Of course, he will retain his place in the history of the Kurdish national movemen, but as a very ambiguous personallity.
Why did he fail? Barzani must have had some agreement both with the Bagdad, and with external actors, but they still did not work. Incidentally, no the ex-president of the autonomy showed his very emotional perplexity in the social networks of the fact that the US withdrew their support when the Iraqi forces started their offensive. It look that the US simply set the Kurds up, their most effective allies in the anti-terrorist coalition. Incidentally, there was a similar situation in Caucasus not so long ago, in 2008 when Saakashvili also looked to the transoceanic ally support.
Another reason for the independent Kurdistan failure is the fact that the Barzani clan never had an unquestionable power in the autonomy. For many tens of years his Kurdistan Democratic Party (KDP) opposed to the Patriotic Union of Kurdistan (PUK) of Jalal Talabani both in politics and in fights who did not like the idea of Kurdistan’s sovereignty (from 2005 through 2014 Talabani even was President of Iraq). Previously the groups managed to make a truce only in 1998 with active assistance of the USA, and only in 2006 the two Kurdish governments united. But the antagonism didn’t go anywhere. This must be where Baghdad played their game, concluding a union with the talabanists: the peshmergas located in Kirkuk were in Talabani’s command. Though now it was Pavel Talabani, who took his father’s role after his death.
Having betrayed the “already non so necessary” Kurds, the US will probably start a fight for Iraq with Iran, whose role in Baghdad and among Iraqi Shiites is hard to overestimate. Especially now, when the Hashd al-Shaabi guerillas retained in fact the integrity of the country. Many experts say that the Americans can bet on the military Shiite, but anti-Iranian “Sadrist movement” and the authority of the Iraqi ayatollah Ali al-Sistani, who enjoys respect both in Baghdad and in Erbil.
Tehran hurried to warn the Iraqi power from a close alliance with Washington: the Supreme Leader of Iran, ayatollah Ali Khamenei advised Iraqi prime minister al-Abadi not to rely on Washington too much: “Don’t trust America, it will cause you harm in future”.
Of course, Iraqi Kurdistan is faced with a hard situation, both in relations with Baghdad and in the domestic relations. Former Turkish general consul in Erbil, Aydin Selcen presumes a confrontation inside the Barzani clan between the senior son and nephew of Masoud Barzani, not excluding an armed fighting between KDP and PUK, which plays the game of the Iraqi government.
This way or another, but it looks like Baghdad and Erbil are far from the real peace. It is yet more evident that it will be even harder to recover the integrity of Iraq than before the referendum. Let’s don’t forget that 90% of the voters (i.e. not only the Barzani’s supporters) were in favor of the Kurdish autonomy’s independence. This might have been the point of no return to a united country. To be continued…
Moscow supported the territorial integrity of Iraq, calling to the conflicting parties to solve the discrepancies under the current constitution. This position was confirmed once again by the special envoy of the Russian President for the Middle East and Africa Mikhail Bogdanov during his meeting with sheikh al-Musili, a representative for Ali Sistani. The mere fact of these talks is a sign that Russia enters the process of inter-ethnic reconciliation. In case of its success, its experience can be applied in Syria. In case of failure, make the respective conclusions.