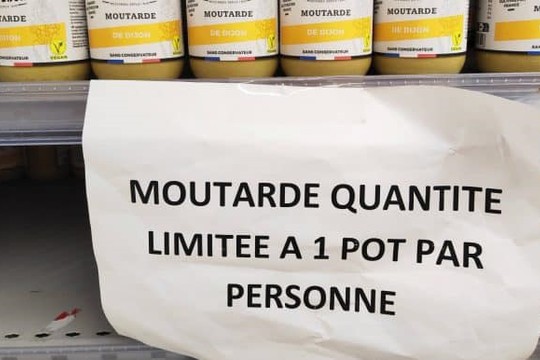 “One jar of mustard for one person” - ad in a French shop. Mustard is the national seasoning for dishes in France.

“France is falling apart. Worse, it shows signs of a rapid transition to the third world. Lack of food and medicine, degradation of public services, destruction of cities, industrial and political disintegration, explosion of violence and illegal immigration… Soon there will be only one caste of the strong and many unfortunates in our society,” - writes the French magazine “Causeur” with bitterness and concern.

“C’est le tiers monde!” (“La France is the third world!”) We hear this phrase more and more often, whether in the bistro or on TV. Many French people now have the feeling that their country is in the process of backwardness – or becoming a Third world.

It is impossible to list all the signs of this recession, as there are so many of them.

The first, and most notable, is the massive influx of asylum seekers who became illegal immigrants, which has led to the return of real slums along the highway. Violent battles ensue between rival ethnically based clans that contest control of territories and trade.

Our cities, once a symbol of civilization and the art of living, are suffering from street crime. In the name of the "fight for the climate" the streets are now devoid of night lighting.

Another phrase is becoming commonplace: “Nothing works in this country!” This inefficiency primarily affects the administration and public services. Today they are the disease of a state that is both omnipotent and powerless. The only exception is the tax authorities, the collection of taxes is still carried out efficiently, at least for the average taxpayer.

The French are getting worse and worse education, state medicine is less and less protective for people. The level of knowledge of French schoolchildren and students continues to fall, as well as the results of our scientific research…

Somebody would object, "We are still the fifth world power!" First, from the point of view of statistics, this must be confirmed. France's GDP per capita has changed from $45,334 in 2008 to $38,635 in 2020 (at constant prices), according to the World Bank. Our economy is becoming real Third World – the French produce only 36% of the material goods they consume. We import high value-added goods and export only our luxury goods, but this cannot constitute the "single sector" of the Great Nation experience.

There were Macron's promises to "restore our industrial sovereignty," but pharmacies now illustrate through new rule: "No more than two boxes to a patient" in some medicines. And all these medicines are made in China.

Finally, another characteristic of underdeveloped societies is that we are seeing the slow disappearance of the middle class in France: We have a society that is polarized between the very rich and the poor. And these people no longer live in the same world – they are from different worlds, stresses “Causeur”.

The fact remains that all the indicators that determine our future are painted in red – "The main threat".

“It remains to be seen who is responsible for this long decay?” - asks the French magazine.