Is Tunisia a messenger of a big crisis? 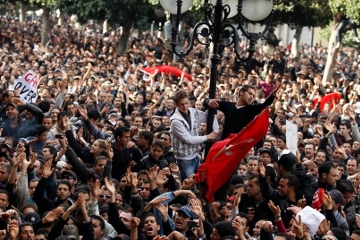 What is going on in Tunisia, a small North African state, which has always been notable for what was seen as domestic stability, moderate pragmatic policy on the international arena and fair economic growth rate? Tunisia’s relations with the West have been presented as exemplary, with considerable investments flowing into the country’s economy. Tunisia also was regarded by many as a touristic Mecca. Suddenly everything has been ruined by the storm – the irreplaceable president Zine El Abidine Ben Ali, who had been ruling the country for 23 years, has fled Tunisia, while the mass riots are continuing in the capital and other cities and no one dares to give any forecasts for the future. What is it? How can we explain the ongoing events and what can we expect from this long running Tunisian drama?

When Tunisia became an independent state in 1956, its leader - President Habib Bourguiba - acted as an ideologist and a promoter of the moderate secular policy both in home and foreign affairs. The brass-hats, who often took power in the Arabic countries, were removed from the decision-making center and Bourguiba’s firm hand suppressed Islamic radicals. The Destour (Constitutional) Party was the only ruling party, while the role of trade unions was kept to a minimum. Under Bourguiba Tunisia enjoyed the US’ military and economic aids, and Washington was never concerned with the problem of democracy in the country. For his outstanding contribution in the development of the state Bourguiba received the title of the country’s lifelong president and regular election were rather a ritual than the real election.

In mid 1980-s, the heath of the aged president worsened and his associates found that he was unfit to govern the country. On November 7 1987, in bloodless coup d’états he was declared incompetent and Prime Minister Ben Ali took over the functions of head of the state and the Commander-in-Chief of the national armed forces.

Ben Ali did not introduce any significant changes into the domestic and foreign policy of Tunisia. However he had to respond to the events in the neighboring countries. The radicalization of Islamists in Algeria made the Tunisian leader ban the pro-Islamic Nahda party and arrest its leaders. At the same time Ben Ali made some concessions too and allowed the activities of the number of the oppositional parties in the country while the Destour pro-presidential kept its dominant position. Tunisia’s financial market was liberalized and restrictions on considerable part of imports were removed. The IMF gave Tunisia a very high credit rating. But Ben Ali made the same mistakeBourguiba had made in his time. When he was reelected in 1994 he did everything he could to protect himself from new reelections. In fact he also became a lifelong president, when in 2002 he introduced changes into the Constitution, which cancelled the number of presidential terms’ limits and the age limit (70 years) for a presidential candidate. These reforms were accompanies by the suppression of the opposition, repressions against Islamic fundamentalists and tortures of political prisoners.

You never know exactly what people really think when they vote in the countries with a so-called “restricted democracy”. But in December 2010, the public opinion of the Tunisian people about their country, the politics and the leadership suddenly declared itself. The simplest and the most convincing explanation of the current events in Tunisia: we are sick and tired of these rulers! We are fed up with lifelong leaders, the only ruling party, which makes the power a privilege of a small clans and lets corruption flourish. We are tired of these “dressed-up” reports on “achievements” and the indifference to the urgent problems of common people, especially young people. The pot was boiling and the steam eventually found the way out.

Neither the attempts to introduce the emergency situation nor Ben Ali’s recent proposals to create additional 300,000 jobs for young people, to reduce prices on food stuffs and essential commodities, to cancel censorship in mass media and to give more freedom to oppositional parties and even his promise not to take part in the 2014 elections had an effect. The Tunisian people did not need Ben Ali anymore. All this will be done without him.

What will happen to Tunisia in future and what are possible consequences of the current events? Ben Ali’s home and foreign politics are likely to be revised. We can also assume that France and the US won’t be able to control the ongoing process in Tunisia and keep it within their interests. Tunisia has seen a revolution with bloodshed, deaths and this is not an Orange revolution.

We can say with a high degree of confidence that a new period starts in Tunisia and the country’s is entering the stage of democracy, which won’t be easy. The democratization of the Arabic society is a double-edged sword. A shift to Pan-Arabism is not excluded and we may expect the country’s more intensive participation in the activities of the Arabic Muslim world and the strengthening of the Islamic motives in the Tunisian policy.

For the first time in 23 years the government formed in January has members from the oppositional parties. Reportedly, one of the three main tasks the new government is facing is the investigation of the crimes committed by former president Ben Ali.

Russia’s former ambassador in Tunisia Veniamin Popov commented on the situation in Tunisia as follows: “The protests of the Tunisian people remind me of the Iranian revolution in 1979, when the Shah’s regime was overthrown. The events in Tunisia show that the people cannot stand the oppression and want their interests to be taken into account. The entire Arabic world is now facing a similar crisis. The events in Sudan, a complicated situation in Lebanon and Yemen are also on the agenda. Similar mass protests have been in Algeria recently. In the coming two-three years we will live in the new system of axes”.