Islamic philosophy and issues of the day: the Russian-Iranian dialogue 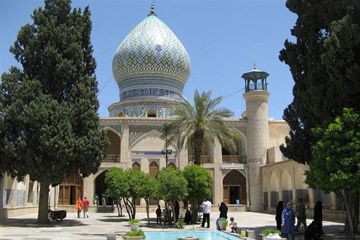 At the Institute of Philosophy of the Russian Academy of Science (RAS), an international conference was held on "Philosophy in the Modern World". It was dedicated to the fifth anniversary of the annual Islamic philosophy yearbook, "Ishraq," and the fifth anniversary of the founding of the academic series on "Philosophical thought in the Islamic world." The Conference was organized by the Islamic Culture Research Foundation in collaboration with the RAS Institute of Philosophy.

Let us say a few words about the concept behind the "Ishraq" yearbook. It is a work in two languages, created with the participation of a huge team of scientists from different countries: Iran, the US, Italy, Japan, Egypt and others.

According to the staff of the RAS Institute of Philosophy, they longed to select the most suitable name for the new project. There were several options, one of them was "Hikma" (wisdom). However they chose to stay with "Ishraq" (which in Arabic means "a desire for illumination"). At the same time, Ishraq, or Hikma al-Ishraq, is a special school in Islamic philosophy based on the specific experience of a rethinking of pre-Islamic philosophy, especially Zoroastrianism, which is the ancient religion of Iran. The creator of this school, Shihab al-Din Suhrawardi (1097 - 1168) is considered to be an outstanding philosopher.

Modern philosophy in Iran is a natural extension of the classical tradition going back to ancient times. It has never been interrupted in these lands. There were tides and periods of greater and lesser activity, but the tradition can be said to have existed continuously for many centuries. Today in Iran, there are people who ensure this intellectual continuity from one generation to the next. As for the Arab countries, mainly Sunni countries, this philosophy, especially in Islamic philosophy are considered suspicious. Philosophy (al-Falsafa) was considered an instrument of Shia, Ismailism, which the Fatimids believed gave them a claim on the throne, in an attempt to undermine and shake the foundations of the Abbasid Caliphate. This was in contrast to the teachings of the Asha’ari school. It is worth mentioning the name of Abd al-Hamid al-Ghazali, who was one of its founders. He was an extraordinary person himself, but the powers of the day created another role for him, that of an antidote to Falstaff.

Opening the conference, the director of the RAS, the scholar A. Huseynov, stressed the great importance of the "Ishraq" project in exploring the rich heritage of Islamic philosophy, and in strengthening the links between modern thinkers around the world. In his speech, the speaker recalled 2010, when a UNESCO World Philosophy Day conference was held in Tehran. In previous years it had been held in France, Italy, Turkey, Morocco, and Russia. This year, the world’s philosophers were to meet in Iran. However, in response to the protests of some local and foreign philosophers, the conference in Iran was canceled. Iran decided to independently conduct an international conference of philosophers, which was attended by members from the RAS Institute of Philosophy. Drawing an analogy between the sanctions against Iran in 2010 and events around the Ukraine in 2014, Huseynov reminded us that the modern world is a world divided by ideological, political and social tensions, and in these circumstances the role of philosophy and philosophers is to strive to overcome these fissures through dialogue, overriding political and ideological boundaries.

Developing the idea of the importance behind Huseynov’s philosophy, the President of the Islamic Culture Research Foundation, Dr. Hamid Hadawi, noted that technological progress now engulfed all aspects of civilization on earth. It cannot be the only path by which people should travel if they aspire to true spirituality, and only philosophy can help humanity to find the right path.

The editor in chief editor of the "Ishraq" yearbook, Y. Eshots, expressed his deep gratitude to the Institute of Philosophy for its comprehensive ongoing support for the "Ishraq" project and other projects, and wished his colleagues further progress and prosperity.

The morning session began with a presentation by a distinguished guest, who honored the conference with his presence, President of the Academy of Sciences of Iran, Reza Davari Ardakani, who devoted his speech on "Philosophy in an era of disorder and confusion in the affairs of the mind" to the founder of Islamic philosophy al-Farabi. A great thinker, who lived during the 9th and 10th centuries, he believed that philosophy and politics are inseparable. That the philosopher is like a prophet, and his knowledge is derived from one source, which is the active mind. According to the speaker, philosophy by itself can’t solve the social and political problems facing humanity. That is not its primary mission, but it is able to help a person understand the difference between right and wrong, good and evil.

The fifth edition of the "Ishraq" yearbook.

Later we heard presentations from the head of the RAS Department of Philosophy in the Islamic World , Mr. A. Smirnov on the "Value of the philosophical discoveries of Ibn Sina and Ibn Arabi in the context of world philosophy," the chief researcher at the RAS Department for Oriental philosophies,  Ms. M. Stepanyants, on the "Status of Muslim philosophy in the modern world", and the leading researcher at the Department of Music Theory of the State Institute for Art Studies in Moscow, G. Shamilli, on "Music, thinking, language: Reflections on the concept of a new universalism."

The speakers repeatedly pointed out the fact that for a long time Islamic tradition was not properly appreciated by historians of philosophy. In particular, Ms. Stepanyants noted that G. Gegel in his "Lectures on the History of Philosophy" does not recognize Islamic philosophy in the general system of the philosophy of the world. The reason was that the author believed that the Arabs did "not put any faith in the supreme principles of reason and self-consciousness, and therefore, did not advance philosophically."

Only in recent years, M. Stepanyants pointed out, has here has been a move to overcome this Eurocentric concept, as further uncritical adherence to it has led and leads to the growth of misunderstanding between the West and the East, and stimulates the growth of conflict on many different levels. According to Ms Stepanyants, the efforts of Russian philosophers, especially A. Smirnov and E. Frolova, have helped in overcoming this situation, and through them the Arab-Muslim world has become the subject of detailed study. Milestones along the way were the release in 2000 of a "New Philosophical Encyclopedia," where close attention was paid to the philosophy of the East, and in particular the Arab-Muslim world, and the publication in 2013 of a textbook on the "History of Arab-Muslim philosophy", with extensive coverage of the entire spectrum of Islamic philosophical thought, beginning with the emergence of philosophical reflection in our time. The editor of the textbook and compiler of an anthology of the basic texts of Arab-Islamic thought is the Deputy Director of the Institute of Philosophy, Head of Philosophy of the Islamic world, Mr. Smirnov.

Presentations were made by the Iranian conference guests: Lecturer at the Department of Philosophy at Tehran University, Allama T.H.Kalbasi (About the book “The enumeration of Sciences, Al-Farabi") and the philosopher-theologian S. Miri ("Al-Farabi and the creation of the theory of post-secular society").  We also heard speeches from the associate professor of the History of Philosophy in the Faculty of Humanities and Social Sciences of the Russian Peoples' Friendship University, R. Pskhu,  on the "Translation of mystical poetry as a historical and philosophical issue”, the lead researcher of the Institute of Philosophy I. Nasyrov on "Ibn Khaldun in Ottoman intellectual tradition (16th -20th centuries)", and Y. Eshots on "Reflections on Arab thought in the mirror of Greek wisdom: the image of the sage in the "Tahafut al-Falasifa, "Pseudo-Ammon." The conference was also attended by the Professor of the Department of Theory and Comparative Law of the National Research University of the  Higher School of Economics, L. Syukiyaynen, and Deputy Director of the Institute of Oriental Studies of Science and the Head of the Department of Near and Middle East Studies, S. Prozorov. At the end of the conference, R. Ardakani again took to the stage, thanking the participants and expressing his hopes for a further long and fruitful collaboration.

We can only agree with such sentiments and say that we are different both in mentality and civilization. We do not impose "mandatory standards" upon each other in terms of domestic public life, but we are capable of being friendly and supportive neighbors, and mutually beneficial partners.