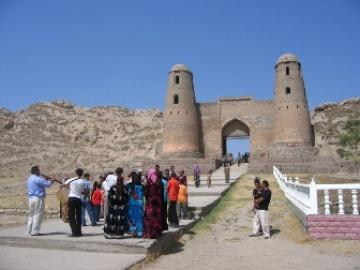 In recent years Tajikistan has been involved in the process of active Islamization. Being one of the poorest countries in the region, and still healing wounds of a bloody civil war of 1992-1997, Tajikistan turned out to be receptive to Islam. The consequences of this will certainly affect not only the country's political regime and its relations with other countries of Central Asia but also security of Russia, where hundreds of thousands of migrant workers arrive from Tajikistan each year.

Currently there are 27 central mosques, 325 congregational mosques and 3,334 mosques for Friday prayers in Tajikistan. In average, there is one mosque for 2,000 people in the republic with 7-million population. Taking into consideration that up to 1 million people, mostly men, spend more than half of a year working in Russia and other countries of the CIS, such great number of mosques makes it easy to reach almost all Tajik people with propagation of Islam. Besides, when the civil war broke out in 1992, Russians and other Christians fled Tajikistan. According to the 1989 census, more than 388,000 Russians lived in Tajikistan at the time, with the total number of non-indigenous,mainly European, population, making 12% (500,000) of the population. Today the number of Russians in Tajikistan does not exceed 50,000 (less than 1% of the population), many of them are elderly people.

Long-lasting confrontation with Islamic opposition has had its impact on the Tajik religious policy. For quite a long time the authorities treated Islam with suspicion for it had long become a source of consolidation for the opposition, and emphasized a secular nature of the Tajik state. Trying to establish a secular ideology, the republican leaders proclaimed 2006 as the year of Aryan civilization. Many cultural and social events were held as part of the campaign, some books on the “Aryan” issue were released. In the essay “Learning the Aryan Civilization” published on his official website, the Tajik President, Emomali Rahmon, stressed a 'truly Aryan' origin of the Central Asian civilization, which lived through invasion of the Turkic and Mongolian tribes.

But the 'Aryan' ideology was not enough to be offered as an alternative to Islam. Unlike nomadic peoples of the region (Kazakh, Kyrgyz and Turkmen), settled Tajik and Uzbek people are more Islamic-oriented. Having farms as their major sources of income, they lived in one place for long and thus were more vulnerable to Muslim influence than nomadic peoples. Informally, Islam kept its leading position in Tajikistan even in Soviet times. The early 1970s saw the rise of Islamic culture, and by the collapse of the Soviet Union in 1991 Tajikistan was the center of Muslim renaissance in Central Asia. Islam grew stronger after the civil war, which took the lives of thousands of people and totally damaged the economy.

Processes against radical Muslim organizations constantly taking place in the republic have forced the authorities to change their attitude to the official Hanafi Islam. On August 10, the Supreme Court of Tajikistan, announced a guilty verdict to five members of the Tablighi Jamaat, who were sentenced to imprisonment of up to six years. They all were found guilty of instigating to violently change the existing constitutional order. The Tablighi activists were detained in mid April during a sermon in one of Dushanbe mosques. According to the Tajik Interior Minister, Lieutenant General Abdurakhim Kakharov, the activists had been trained in special religious centers in Indonesia, Pakistan and the United Arab Emirates. Founded in in India in late 1940s, the Tablighi Jamaat became active in Tajikistan in 1997, after peace accords with the United Tajik Opposition were signed. Before that time, the extremists hid in Afghanistan and Pakistan. The organization's main goal is to convert the whole planet to Islam. According to different estimates, the number of Tablighi Jamaat followers in Tajikistan is about 6,000.

Fifty-six Tablighi Jamaat activists were tried in Tajikistan this March, twenty-three of them were sentenced to imprisonment of up to six years, and thirty-three were charged big fines. In May thirty-six Tablighi Jamaat activists were brought to court in Khatlon district in southern Tajikistan. Three of them were sentenced to 6,5 years in prison, while the rest faced up to 5 years in jail and were fined 4,500 Euros each. Five more Tablighi members were convicted by the Tajik Supreme Court in August 2009. However, many Tajik theologians and Muslim figures do not consider the Tablighi Jamaat dangerous, though the organization was banned in the republic in 2006. Leader of the Party of Islamic Revival of Tajikistan, Muhiddin Kabiri, and former spiritual leader of the Islamic opposition, Khodzhi Akbar Turadzhonzoda, voiced their support to the Tablighi Jamaat.

In summer of 2009, seven leaders of the banned religious movement Salafiya, were detained during prayers in Dushanbe, and were accused of stirring up racial and religious hatred. In January 2010, they were convicted by the Supreme Court of Tajikistan, and their leader faced a maximum prison term of 9 years. In all, more than 100 Islamic extremists, including members of Salafiya, Hizb ut-Tahrir and Tablighi Jamaat, were brought to court this year. Their activity became a part of the political life of Tajikistan, which led to the authorities demonstrating a more loyal attitude to traditional Islam.

Anti-extremist policies caused an increase in number of followers of the traditional Hanafi Islam. It became much easier to register a mosque or a prayer house, with only 10 signatures and 100 members of the congregation required. In view of this, 364 new mosques have been built in Tajikistan since January.

Soon Dushanbe will have the biggest mosque in Central Asia to accommodate 150,000 believers at a time. The project is financed by the Arabs. A new building of the Islamic University will be attached to the mosque. There are nineteen officially functioning medreses in Tajikistan, while all other home Muslim schools which existed before are banned. Apart from the Hanafi Islam, Tajikistan officially recognizes Ismailism, a branch of Shia Islam, which has up to 200,000 followers there.

Islam is becoming more dominating in social and political life of Tajikistan. And amid mass labor migration of Tajiks to Russia, this process makes it easier for radical islam to take roots on Russian territory.